The Masters and the Millennials | Part 3: Nothing is Better than Knowledge – Shaykh Abdurragmaan Khan This is the third part of a series, click here for the previous article.

The Prophet’s Knowledge
We are continuing our discussion of the importance of knowledge. The Messenger of Allah (blessings and peace be upon him) was the most knowledgeable of Allah’s creation. He received his knowledge directly from Allah.

According to a hadith regarding the knowledge of the Prophet, one morning he was late for fajr and did not lead it at the start of its allocated time. The companions (sahabah) waited for him because the prayer only commenced when he entered. He arrived before the allocated time of Fajr had passed, and led the prayer. After the prayer, he turned and faced his companions, explaining that he had ascended to the heavens. He said that Allah asked him three times what the Angels were discussing and that he responded three times by saying ‘Allah knows’. Then Allah placed His hand (not a literal hand) on the Prophet’s back and thereafter he knew everything. He knew what was in the heavens and on the earth. Then Allah repeated the question and the Prophet (blessings and peace be upon him) replied that the angels were discussing the different expiations for crimes and the different rewards for good deeds. (Reported by Ahmad and others)

Thus we come to know that the Prophet’s knowledge is beyond our comprehension. Our teachers often stated that only Allah knows the extent of his knowledge (blessings and peace be upon him).

Similarly, one who exerts oneself in the acquisition of knowledge, Allah will open a door to special knowledge, directly from Him, like the knowledge with which Khidr (peace be upon him) was honoured.

Knowledge vs worship
Knowledge is essential. In our time, it is more important than worship. Many a worshipper’s life will be wasted due to his lack of knowledge.

The virtue of seeking knowledge is great. Today we find that people turn to gatherings of remembrance (dhikr) much more than to classes of knowledge. The Prophet (blessings and peace be upon him) entered a mosque and found two circles. One was making dhikr and the other was discussing fiqh. He said both gatherings are doing good, but the gathering of knowledge is more virtuous than the other one. He said, “As for me, I was sent as a teacher”, so the circle of knowledge is better.

Habib Ahmad bin ‘Umar bin Sumayt said that if the Prophet (blessings and peace be upon him) were to enter a home and there were two circles – a mawlid and a fiqh class – he would attend the fiqh class before he attended the mawlid. This is not to detract from the value of the mawlid and circles of dhikr. They are very important, but we must observe the actions of the scholars. They spend more time on the acquisition of knowledge.

Anas ibn Malik narrated that the Prophet (blessings and peace be upon him) said, whoever leaves home in search of knowledge is in the way of Allah until he returns. So the merit and virtue of seeking knowledge are great.

Imam Haddād said a person who is intellectually challenged should stick to worship, but anyone who has deep understanding should be driven by knowledge.

Habib ‘Ali al-Habshi had a great passion for the science of grammar. He would start his class every morning with a discussion of grammar. One of his students had a dream in which he saw three students with shining faces attending the class. The first one was the Prophet (blessings and peace be upon him), the second was Sayidina ‘Ali (Allah be pleased with him), and the third was Sayidina Hasan (Allah be pleased with him). They said they had come to attend Habib ‘Ali’s class. When he was informed about the dream, Habīb ‘Ali said, as long as the Prophet attends our grammar class we will continue to teach grammar.

The scholar vs the worshiper
It has been said Allah regards that a lazy student of knowledge as more virtuous than 700 worshippers who exert themselves in worship. ‘Abd Allah ibn ‘Abbas said that scholars will be elevated above believers by 700 degrees in rank, and that between each degree there will be a travelling distance of 500 years.

According to Habib ‘Abd Allah bin ‘Aydarus al-‘Aydarus, when the demise of the Prophet was approaching, the earth began crying to Allah, saying, “The Prophet used to walk on me. Who is going to walk on me now? There will be no Prophets after the Prophet.” The Prophet (blessings and peace be upon him) responded, saying “The scholars of my ummah are like the Prophets of Bani Isra’īl.”

What scholar is greater than the worshiper
It is important to realize that the kind of scholar being referred to in all these narrations is not one who merely increases in knowledge but does not increase in closeness to Allah. Allah poses a rhetorical question: Are those who have knowledge the same as those who do not have knowledge? The point is that they are not the same. Allah describes the scholar: He is someone who is submissive to his Lord, who stands in prayer at night and prostrates to his Lord, who fears the afterlife, who fears Allah, who cries in the early hours of the morning.

In other words, the scholar is one who acts on his knowledge. The scholar who has knowledge but does not act on it will be the first to be thrown into the fire.

Acquisition of knowledge has no end
The cycle of knowledge should never end. The scholar is always a student and a teacher. For instance, Habib ‘Umar used to attend the fiqh classes of Habib Salim al-Shaṭiri at least once a week even though he has his own very large classes. This should be an encouragement to students of knowledge. 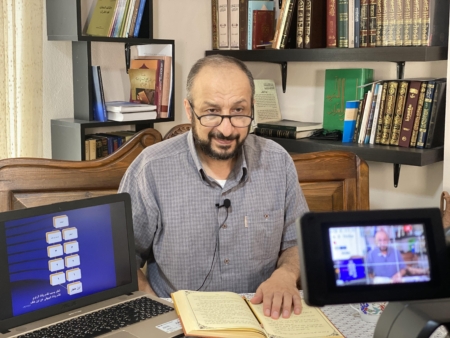