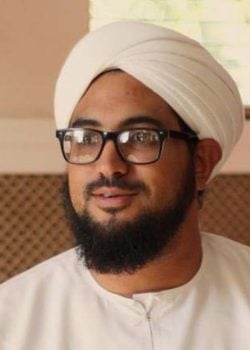 Shaykh Abdurragmaan Khan completed the memorization of the Qur’an under Shaykh Ismail Londt at the Dar Ubaiy Institute in 2000. He then went on to graduate from the Dār al-Ulūm al-‘Arabiyyah al-Islāmiyyah in 2006, where he benefited from the school’s lecturers, specifically its founder and principal, Maulana Taha Karaan.

After graduating, Shaykh Abdurragmaan served as a lecturer at the same institute from 2006 to 2015. In 2009, he established Dar al-Turath al-Islami (DTI) and continues to serve as the Director.

In 2011, Shaykh Abdurragmaan co-founded the Mahabbah Foundation and was honoured to join the Fatwa Committee of the Muslim Judicial Council of South Africa in 2013. He is also an Imam at Masjid al-Rahmah, Garlendale.

Shaykh Abdurragmaan received ijazah in the qira’ah of Imam Kisa’i from Shaykh Idris from Malawi and is currently reciting the seven Qira’ah to Maulana Saleem Gaibie.