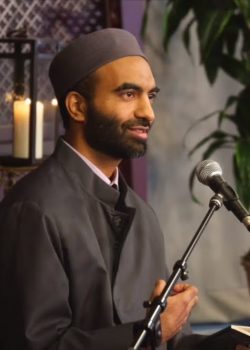 “La ilaha illa Allah — the mandate to conquer my ego… Muhammadur Rasul Allah — the reward if I succeed.”  — Faraz A. Khan

One of his main inspirations in seeking knowledge was the English rendition of Ibn Rajab al-Hanbali’s “Heirs of the Prophets,” translated by our beloved Imam Zaid Shakir. Shaykh Faraz was particularly moved by the chapters discussing the immense virtue of sacred knowledge; the prayers for scholars by creation, including even ants in their burrows and fish in the sea; and the weeping of the heavens and earth at the death of scholars.

Shaykh Faraz A. Khan is currently not teaching any courses.

The Masters and the Millennials | Part 6: From the Cradle to the Grave R...