There are a few words the recitation of which guarantees that you enter Paradise should you die on the same day or night. The Messenger of Allah, Allah bless him and give him peace, gifted the Muslims with the best words to ask Allah’s forgiveness. Known as The Foremost Formula of Asking Forgiveness (Sayyid al-Istighfar), this supplication is unmatched in the beauty and depths of its meanings. This course, taught by Shaykh Muhammad Abu Bakr Ba-Dhib, is a detailed explanation of those meanings, which will bring life to this supplication.

“If you did not sin Allah would have got rid of you and created people who sinned and then asked Allah for forgiveness, and then forgiven them.” (Muslim) As humans, we are prone to mistakes. Allah, out of His pure generosity, has given us a means to benefit even after we sin: asking for forgiveness. If we ask with sincerity Allah forgives our sins no matter how great or how many they are. But not all words of asking for forgiveness are equal. The Messenger of Allah taught us the foremost formula of asking Allah for forgiveness. WIthin it is a recognition on Allah’s power, mercy, the primordial pledge, a recognition of His blessings, one’s faults and that none can actually forgive except Allah. In this series, Shaykh Muhammad Abu Bakr Ba-Dhib explains this beautiful supplication of the Messenger of Allah, Allah bless him and give him peace, and the topic of asking for forgiveness as a whole. The lessons are based on the book The Healing of Hearts and Eyesight in the Exposition of the Knowledges Contained in The Foremost Formula of Seeking Forgiveness, by Imam Ahmad ibn Zayn al-Habashi’, which Shaykh Muhammad has produced a critical edition of. Dr. Mohammed Abubakr Abdullah Badhib was born in 1976 in Shibam Hadramawt, Yemen. He has gained many qualifications, including a Certificate in memorizing the Holy Quran, numerous Ijazat in Hadith. Dr. Muhammad has also completed Graduate Studies at Al Ahqaf University, Faculty of Sharia and Law, Beirut Islamic University, Faculty of Islamic Studies, 2008 and Aligarh Muslim University, Faculty of Theology, 2013. Author and editor of more than 70 books in theology, Islamic Fiqh, Islamic history, Arabic literature, Arabic poetry, and others. 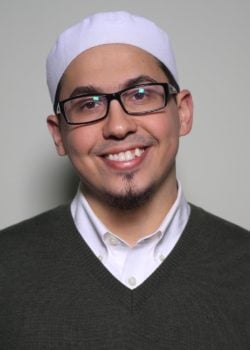 Amjad Tarsin was born and raised in Ann Arbor, Michigan. He obtained his Bachelors of Arts at the University of Michigan in English Literature and Islamic Studies.
After completing his BA, Amjad spent an intensive year studying at the illustrious Dar al-Mustafa for Islamic Sciences in Tarim, Yemen. He then enrolled at Hartford Seminary’s Islamic Chaplaincy program where he completed his Master’s Degree.
In 2012 he was hired by the Muslim Chaplaincy of Toronto as Canada’s first full-time Muslim Chaplain serving at a university. He is currently the Muslim Chaplaincy of Toronto’s Executive Director and Head Chaplain. He also teaches at SeekersHub Toronto.
He lives in the Greater Toronto Area with his wife and two children.