Understanding Virtue through the Prophetic Teachings (Lesson Twenty-One): In this lecture, Shaykh Faraz discusses the virtues of praying while in ones home. Jabir ibn Abd Allah (Allah be pleased with him) relates that the Messenger of Allah (peace and blessings be upon him) said, “If one of you prays at your mosque, then leave a share of your prayer for your home, for Allah (Mighty and Majestic) has placed good in one’s prayer at home.” [Muslim (778)] 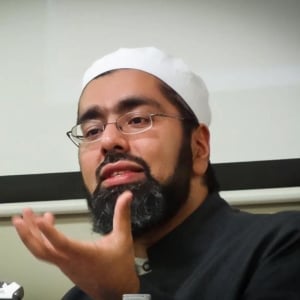 Shaykh Faraz Rabbani explains the words of the Prophet Muhammad (peace be upon him): “The strong believer is better and more beloved to Allah than the weak believer, though there is good in both.”

The Believer’s Clarity When Tested: The Power of Patience
The Struggle and Strife Of A Believer’s Life
Will a Believer Who Doesn’t Practice Islam Go to Paradise?
Is There a Prophetic Supplication to Relieve My Hopelessness?

In the Name of Allah, the Benevolent, the Merciful. It is reported by that Abd Allah ibn Umar (Allah be pleased with him) said,

Do we even know about their way, their lives, their habits, their efforts, their commitments?

Love for the Beloved Prophet Muhammad — “And know that the loftiest of exemplars, the most noble and the greatest and the most binding to all Muslims is the Messenger of Allah, Allah bless him and grant him peace: verily he is by unanimous agreement the Greatest Exemplar.

And the obligation due to him is the greatest after that of Allah; and the adab with him the most emphasised of the adab and obediences. For whosoever loves him and immensely esteems him, he has indeed loved Allah and whosoever obeys him has indeed obeyed Allah.

Says Allah, the Exalted: ‘Say, if ye do love Allah, follow me: Allah will love you and forgive you your sins. For Allah is the Oft-Forgiving, Most Merciful’ (âl-‘Imran: 31).

And says the Exalted: ‘He who obeys the Apostle, obeys Allah’ (an-Nisaa: 80).

And says the Exalted: ‘So take what the Apostle assigns to you, and deny yourselves that which he withholds from you. And fear Allah; for Allah is strict in punishment’ (al-Hashr: 7).

And says the Exalted: ‘Then let those beware who withstand the Apostle’s order, lest some trial befall them, or a grievous Penalty be inflicted on them’ (an-Nur: 63).

And says the Exalted: ‘Verily, those who plight their fealty to thee do no less than plight their fealty to Allah: the Hand of Allah is over their hands: then anyone who violates his oath, does so to the harm of his own soul, and any one who fulfils what he has covenanted with Allah, Allah will soon grant him a great reward’ (al-Fat’h: 10).

And says the Exalted: ‘So it is those who believe in him, honour him, help him and follow the light which is sent down with him – it is they who will prosper’ (al-A’araf: 157).

And says the Exalted: ‘O who believe! Raise not your voices above the voice of the Prophet, nor speak aloud to him in talk, as ye may speak aloud to one another, lest your deeds become vain and ye perceive not. Those who lower their voice in the presence of Allah’s Apostle – their hearts has Allah tested for piety: for them is Forgiveness and a great reward’ (al-Hujurat: 2-3).

And says he, upon whom be blessings and peace: ‘One of you does not believe until I become dearer to him than the soul that lies between the two sides’.

And says he, upon whom be blessings and peace: ‘One of you does not believe until his desire follows what I have come with’.

And says he, upon whom be blessings and peace of Allah: ‘Were Musa and Isa alive, they cannot but follow me’.

And says he, upon whom be blessings and peace: ‘Whosoever obeys me, has indeed obeyed Allah and whosoever disobeys me has indeed disobeyed Allah’.

And what goes to perfect love to him and high esteem and beneficient adab towards him, blessings and peace be upon him, is love for the people of his house and his companions, esteem for them and respect.

And says the Exalted: ‘The vanguard (of Islam), the first of those who foresook (their home) and of those who gave them aid, and (also) who followed them in (all) good deeds – well-pleased is Allah with them, as they are with Him’ (at-Tawbah: 100).

And says he, upon whom be blessings and peace to ‘Abbas, may Allah be pleased with him: ‘Iman does not enter the heart of one until they love you for the sake of Allah and for your nearness to me’.

And says he, upon whom be blessings and peace, in the hadith of Zayd bin Arqam, may Allah be pleased with them: ‘And my issues are the people of my house. I remind you, in the Name of Allah, about people of my house’.

And says Abubakr, may Allah be pleased with him: ‘Have a conscientious regard to Muhammad in the people of his house’.

And says he, upon whom be blessings and peace: ‘Do not abuse my companions. Verily, in the Name of Him in Whose Hands my soul is: were one of you to spend the like of the mountain of Uhud in gold he would not attain the rank of one of them, not even half of it’.

Let a Muslim, who is solicitous about his religion therefore, beware of hating a member of the house of the Apostle, may Allah bless him and grant him peace, or one of his companions because that harms his religion and his Hereafter. And because of it, he gets counted among those who offend His Prophet and annoy him, Allah bless him and grant him peace. Let him love them and praise them on account of good (in them) in the same manner as Allah has praised them as well as His Apostle.”