What does Islamic knowledge do for us, what is its nature and how does it transform us? Shaykh Idris Watts elucidates in this brief video at the UK’s Micro-Madrasa.

Shaykh Idris Watts gives us a little taster into the extent to which our pious predecessors were in touch with the condition of their communities. What did they do for young Muslim families with children, for example, when nativity plays were being widely read and performed?
A real and relevant talk that focusses on recognising the issues many Muslims today struggle with and how the Prophet’s ﷺ teachings form the core of a rich and merciful tradition. 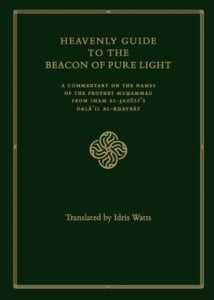 Shaykh Idris Watts and The Keighley Munshids opened the webinar from Keighley, UK by reciting the names of the Prophet (God bless him and give him peace).
We then transitioned to Shaykh Faraz Rabbani at SeekersHub Toronto for a reminder of the gratitude, love, and praise that is due to the Messenger of Allah (God bless him and give him peace).
Moving back and forth between Keighley and Toronto, the webinar was really a reflection of Allah’s words:
“And We have not sent you (O Muhammad) except as a giver of glad tidings and a warner to all mankind” (34:28).
and
“And We have not sent you but as a mercy to the worlds” (21:107).
The Prophet (God bless him and give him peace) has united us under the banner of faith in God; a banner of truth, love, and mercy. From across the globe, our teachers and viewers joined in celebration of these virtues, and the one who so perfectly embodied them.
May Allah make us true inheritors of the Prophetic way and grant us his intercession on the Day of Reckoning, ameen.
You can purchase the book online via their website here.

You can view the webinar here:
Related resources:
Love Of The Prophet And Following His Example – Shaykh Gibril Haddad
Excessive Praise of the Prophet? Understanding the Meaning of Praise
Why do We Send Prayers of Peace & Blessings Upon the Beloved Prophet of God?
https://seekersguidance.org/wp-content/uploads/2014/06/heavenly_guide.jpg 1232 878 Erin https://seekersguidance.org/wp-content/uploads/2020/04/SeekersGuidance_Logo.png Erin2014-06-11 19:14:112019-04-05 15:56:21Prophet Muhammed's ﷺ Blessed Names - Online Webinar - Shaykh Faraz Rabbani & Shaykh Idris Watts

Born and raised in Kent, Muhammad Idris Watts accepted Islam in 1998 in the first year of his Arabic Language Degree at the University of Leeds. In the second year of the degree programme, he set off to the ancient city of Fez, Morocco to further his Arabic Language studies. During this period he attended circles of knowledge and zawiyahs around Fez. He also sat with many prestigious singers of Fez such as Sidi Muhammad Bennis. Shaykh Idris graduated in 2002 from the University with First Class Honours and also received an award of excellence for his language skills. He moved back to Fez to embark on an intensive period of study. He attended classes at the Qarawiyeen University in the Old City for the next four years studying with the likes of the adept grammarian Shaykh Abdel-Hayy al-‘Amrıw+ and many other teachers.

He studied classical texts including the Ajrumiyah, Lımiyat al-Af’ıl, Matn az-Zanjın, Alfiyah in Grammar and Morphology, Ibn ‘Ashir, al-Akhdar+, Risılah of Ibn Ab Zayd and sections of the ‘Asimiyyah in Mılik Fiqh, as well as Jawharat at-Tawhd in Creed. He also had the opportunity of sitting with the students of the late Shaykh Makk bin Krın, (may God bless his soul), who was a master of the ten variant recitations of the Qurın and studied Tajwd and four of the variant recitations with them. After his studies, he travelled Morocco in order to benefit from the Shaykhs of Tarqah. He mainly stayed in the company of the teachers of the Alaw Darqawi Shıdhil Order and eventually pledged allegiance to Shaykh al-Buzayd Bujrıf of the Reef region of Morocco in 2006. He returned to England in 2007, and recently took up the full-time post of Resident Scholar at the Abu Zahra Foundation.