You are here: Home / sunna

The first ten days of Dhu’l Hijjah are blessed days: Allah Most High Himself swore by them in the Qur’an:

The Qur’anic commentators generally agree that the ten nights mentioned above refers to “the first ten days of Dhu’l Hijjah,” as one may find in Shaykh al-Islam Abu Su`ud’s Irshad al-`Aql al-Salim ila Mazaya al-Qur’an al-Karim [famous as Tafsir Abi al-Su`ud, 9.153] or in Tafsir al-Jalalayn.

Imam Ahmad and Nasa’i report from Sayyida Hafsa (Allah be pleased with her) that, “The Messenger of Allah (blessings and peace be upon him) did not leave four matters: Fasting `Ashura (f: 10th of Muharram), [during] the ten days [of Dhu’l Hijja], and three days of each month.”

Question: Are we sinful for missing sunnah prayers, or are they just for extra reward?

I apologize for the delay in answering your question.

The confirmed sunna in the Hanafi school almost equates to the level of necessary (wajib); therefore, leaving it would be blameworthy and if consistently left, could even be sinful. [Ibn Abidin, Radd ul-Muhtar]

The Types of Sunna

Firstly, it is important to know that there are two types of sunna, the confirmed (mu’akkada) and the non-confirmed (ghair mu’akkada).

The Ruling of the Confirmed and the Non-Confirmed Sunna

As for the non-confirmed sunna or recommended (mustahab) actions, the one who performs these is rewarded and the one who leaves it is not sinful nor is it blameworthy.

Imam Abd al-Hayy al-Lacknawi mentions that some have said the punishment for leaving the confirmed sunna is the prevention (t: of some types) of the intercession of the Messenger of Allah (Allah bless him and give him peace) reaching one.  [Lacknawi, Tuhfat al-Ikhyar bi Ihya Sunnat Sayyid al-Abrar] As mentioned, there are different types of intercession and this is not talking about the greatest intercession (shafat al-`udhma). Nevertheless, it should be enough that the scholars have even mentioned this. It suffices to say that in our school, the confirmed sunna is very important.

The Way of the Righteous

A simple principle: following the Beloved is the means to becoming beloved. Strive to learn the sunna out of love, apply it in your life out of devotion and become realised in what it means. The sunna is the way of performing our religious duties in the best and most beautiful of ways and a means of loving him (Allah bless him and give him peace) when one truly understands the reality.

Allah Most High says, “O who you believe! Be mindful of Allah Allah and be with the truthful.” [Qur’an, 9:119]

The Messenger of Allah (peace and blessings be upon him)said, “Truthfulness (sidq) leads to righteousness (birr) and righteousness leads to the Garden. A person remains truthful until they are recorded as truthful in the sight of Allah. Lying leads to corruption (fisq) and corruption leads to the Fire. A person lies to the point that he is written down as an inveterate liar in the sight of Allah.” [Bukhari and Muslim, from Ibn Mas`ud (Allah be pleased with him)]

Definition, Explanation, and Perfection of Being True

Being true (sidq) is defined as, “One’s inward conforming to one’s outward, through being upright with Allah Most High, inwardly and outwardly, in public and in private.” [Muhammad Ali al-Tahanawi, Kashshaf Istilahat al-Funun]

A person who is true can change their conduct, attitude, and actions depends on company and circumstances–but with a sound reason, and in a “good” way. Upholding adab (proper manners) that are appropriate to the situation is from being true. Sometimes, the adab would be to joke around; at other times, to be serious; and so on.

This is why al-Tahanawi continues in his definition of being true (sidq):

“This uprightness is by having nothing occur to one (before) Allah Most High. Whoever has this state–of their outward and inward being the same, and leaving beholding creation by constant beholding of the Real (al-Haqq, Allah)–is named veracious (siddiq). [ibid.]

He also mentions a test of being true is, “To speak the truth in situations when only lying would save you.”

And he closes his useful discussion on being true (sidq) by quoting Imam Abu’l Qasim al-Qushayri, who said, “Being true (sidq) is for there to be no dubiousness in one’s state; no doubt in one’s believes; and no blameworthiness in one’s actions.” [ibid., quoting al-Jurjani’s Ta`rifat]

The Consequences of Being True

There is a tremendous Divine promise for those who are upright in word and deed. Allah Most High promises:

“O you who believe, be mindful of Allah and always speak upright words. He will rectify your conduct, and forgive you your sins. And whoever obeys Allah and His Messenger has indeed attained tremendous success.” [Qur’an, 33.70-71]

May Allah make us of the true (sadiqin), the mindful (muttaqin), of those whose actions are rectified by Allah, of those who strive sincerely to obey, thank, love, and attain closeness to Allah and the Messenger (peace and blessings be upon him), in this life and the next–for that is tremendous success.

YouTube – MUST SEE!!! The blessing of being a muslim – Do you appreciate it?:

A talk by Shaykh Ibrahim Osi-Efa on modesty in Islam (in three parts). This is a powerful clip from it: 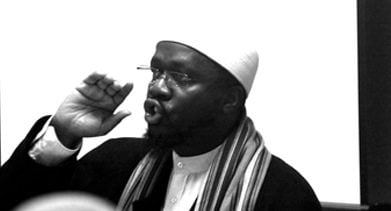 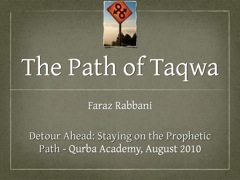 A talk delivered by Shaykh Faraz Rabbani at the Qurba Retreat “Detour Ahead: Staying on the Prophetic Path, August 2010. Shaykh Faraz highlights the Qur’anic call to mindfulness (taqwa); the virtues of taqwa; its three levels; and how mindfulness is manifest in faith, outward actions, the actions of the heart, and also in one’s thinking.

See: The Path of Taqwa – Faraz Rabbani – Qurba Retreat 2010 from Qurba on Vimeo

https://seekersguidance.org/wp-content/uploads/2010/09/path-of-taqwa.jpg 180 240 Shaykh Faraz https://seekersguidance.org/wp-content/uploads/2020/04/SeekersGuidance_Logo.png Shaykh Faraz2010-09-01 21:40:012020-01-22 08:17:47The Path of Taqwa - Faraz Rabbani - Qurba Retreat 2010 (Video, Lecture)
Hamd – praise – is the cornerstone of our faith. We praise God for the gift of life, for guidance and for the opportunity to do good and spread mercy. Every breath we take and every step we make should be an occasion for joy and praise. Nobody praised God better than the most praiseworthy of human beings – the Prophet Muhammad. His life was all about praise – praise expressed through the best of character, the most generous of hearts, the way of service. In him we have a model of praise that we can follow. Our demonstrations must not only call attention to injustice and inequity, but we must at the same time demonstrate the example through which injustice can be remedied, inequity can be vanquished and mercy can be brought into the lives of the many. Shaykh Idris Watts’s has a simple message for us all: Praise Him by following the one who praised Him best!
https://seekersguidance.org/wp-content/uploads/2020/04/SeekersGuidance_Logo.png 0 0 Shaykh Faraz https://seekersguidance.org/wp-content/uploads/2020/04/SeekersGuidance_Logo.png Shaykh Faraz2010-06-22 23:12:262019-04-26 18:53:24Shaykh Idris Watts "Praise Him!" // June 2010 // Radical Middle Way

Question: I am confused about the number of obligatory prayers that need to prayed for the Friday prayer. I have been praying only two cycles behind the imam. However a friend mentioned that I have to read four obligatory cycles as well. Is this true?

I pray that you’re well, insha’Allah.

No, the obligation for the Friday prayer is two cycles (rak`ah) only. [Maydani, al-Lubab fi sharh al-Kitab]

The Ruling of the Confirmed Sunnah

Our teacher Shaykh Faraz Rabbani explained the ruling of the confirmed sunnah as follows:

“The confirmed sunnah (sunnah mu’akkada) is that which our Prophet (Allah bless him and give him peace) or the Companions did most of the time (and was not of worldly habits). One who leaves it without excuse deserves reproach, not punishment. Leaving it habitually is sinful, though, because it entails ‘turning away’ from the guidance of the Messenger of Allah (Allah bless him and give him peace), whom we have been commanded to follow.” [Absolute Essentials]

The Wisdom Behind the Confirmed Sunnah Prayers

The scholars have mentioned many reasons for the legislation of the confirmed sunnah prayers.

Abu Zaid al-Dabusi mentions that the sunnah prayers were established to lift the deficiency found in the obligatory (fardh) prayers because the servants of Allah, even those of high rank, are not free from deficiency.

Question: In obligatory prayers, after the first tashahud you stop and stand without sending blessings on the Prophet (Allah bless him), and in the third and fourth rak’ah there is no surah after the fatiha. But in a sunna prayer I’ve heard you do recite after Fatiha in every rak’ah, and you do recite durood and du’a (rabbij-‘alni…) in the second rak’ah tashahud. Is this correct? And is it for all four rak’ah sunnahs or only for ghayr mu’akkadah (and which are ghayr mu’akkadah)?

InshaAllah this reaches you in the best of states.

For four-rak`a non-mu’akkada sunna prayers (for example before Asr), each two rak`as is like a separate prayer, though they are offered with one taslim only at the end. This means that in addition to reciting a sura in all rak`as, one would also recite the durood after al-Tahiyyat in the first sitting, and recite the thana’ (opening invocation: subhanakAllahuma wa bihamdik…) and ta`awwudh (a`udhu billahi…) at the beginning of the third rak`a.

In the last sitting of all prayers, one recites al-Tahiyyat, durood, and d`ua.

In this lecture, Shaykh Faraz discusses the importance of serving the creation of Allah (The Most Exalted) and by doing so through the prophetic example of mercy, gentleness, and intimate concern.

In this lecture, Shaykh Faraz Rabbani describes why people often fail to follow the Sunnah or follow it but in an insufficient manner. He shares valuable lessons from Imam Nawawi’s “Riyadh us Saliheen” that teach us the Sunna of following the Sunna.