Habib Kadhim al-Saqqaf encourages us to maximise our benefit from the last ten days of Ramadan, and offers advice and practical tips.

We can begin by appreciating the gift of these blessed ten days, and learning about what Allah is offering us therein. We can receive it with gratitude and joy, and thankfulness to Allah for His gift.

We can intend to fast happily, do good works and pray tarawih in order to follow the practice of the Prophet, Allah bless him and give him peace. Intend to deal with others well this Ramadan.

We can also keep in mind that Allah prescribed the fast to us, just as He did to others before us. It was not meant to be a pointless command to put us in difficultly, but rather to teach us valuable lessons in self-restraint and God-consciousness.

Therefore, we can rejoice in the presence of these days, by exposing ourselves to the mercy of Allah, and embodying it by showing mercy to other. This is in the spirit of the hadith, “The merciful ones will be shown mercy by the Most Merciful. Show mercy to the ones on Earth, and the one beyond the heavens will be merciful to you.” (Tirmidhi) We should pray for Muslims and non-Muslims alike, and we should pray that people who are isolated or unaware of the religion, find a connection to it.

In this segment, Shayh Ibrahim gives commentary on the following verses, which cover Luqman’s advice to his son.

And remember, when Luqman said to his son while he was exhorting him, “O my son, do not associate [anything] with Allah. Indeed, association [with him] is great injustice.” (31:13)

The theme of exhortation, of wa’dh, is common in the Qur’an. It is defined as to censure someone, or to instil fear into their heart, to being about a state of tenderness of the heart. Therefore, it is not fear for fear’s sake, but fear for a good cause. Oftentimes, people’s hearts can become hard, and feeling some wa’dh helps reverse this.

And We have enjoined upon man [care] for his parents. His mother carried him, [increasing her] in weakness upon weakness, and his weaning is in two years. Be grateful to Me and to your parents; to Me is the [final] destination.

With a few exceptions, obedience to parents is extremely emphasised. Abusing parents is considered to be an enormity according to many Hadith.

In Sahih Bukhari, we find story of Juraij, a righteous man from the time of Banu Israel, who was worshipping in solitude when his mother called to him. Immersed in his prayer, he did not respond. Due to that, he was blamed by a prostitute for her pregnancy. The people smashed his sanctuary, until the baby, miraculously exonerated him.

[And Luqman said], “O my son, indeed if wrong should be the weight of a mustard seed and should be within a rock or [anywhere] in the heavens or in the earth, Allah will bring it forth. Indeed, Allah is Subtle and Acquainted. (31:14)

Here, Luqman’s son asks him about small sins. Luqman replies that even the smallest sin is still wrong, and Allah knows everything.

In this segment, Shaykh Ibrahim speaks more about the sage Luqman, whom the chapter is name after. He is described in the Qur’an;

And We had certainly given Luqman wisdom [and said], “Be grateful to Allah.” And whoever is grateful is grateful for  himself. And whoever denies  – then indeed, Allah is Free of need and Praiseworthy. (31:12)

Luqman was granted hikma (wisdom) but was not a Prophet himself. The soundest opinion is that Luqman was a Nubian from modern-day Sudan. As to his family, there is difference of opinion whether he was a cousin of Ayyub, or whether he was related to the Prophet Ibrahim. He lived for a thousand years, and the Prophet Dawud learned from him, just like the Prophet Musa was commanded to seek out Khidr for his wisdom. There were many Prophets who were educated by wise people, even though the Prophets were the best of creation.

The Prophet, Allah bless him and give him peace, said, “Wisdom is the lost property of the believer.” This teaches us that we should seek knowledge, even if it’s through someone who we feel is that lesser to us in age, wisdom or experience. Similarity, the people of Allah treasure being unknown and  obscure. The scholars of Madina would only each and give legal verdicts when they had to, and would be happy if someone else, who was more qualified, took over from them.

Nasheed Hub: Qasida Burda Part 2–On Admonition About The Caprices Of The Self

In this segment, Shaykh Ibrahim discusses sama, or listening to spiritual poetry and songs. Continuing the discussion about entertaining discourse–music meant to distract from God–he mentions that even good things can fall into the category of being impermissible, if they distract from Allah.  Given that, spiritual poetry only becomes wrong if it is used for a purpose other than to help people in their path of knowledge.

Some people may be listening to spiritual poetry or remembrance, or even something like Qur’an recitation, in a way that distracts them from Allah, whereas others will be using it as a means to Allah. Similarly, if someone is praying, but is very proud of their prayer, then the prayer, although intrinsically a good thing, has now become a distraction.

Throughout history, many poets and scholars have written spiritual poems that seem to the layman as if they are speaking about the love of a woman, although they are actually speaking of Divine Love.

By way of explanation, an Andalusian poet once said,

“Not everyone who smells obtains the fragrance,

and human beings are of clear degrees,

some people who stop at the outer shell,

never getting to the inner essence.”

Sura Luqman has 34 verses. Some say that all 34 verses were revealed in Mecca, while others say that all but two or three verses were revealed in Mecca. Regardless, it is classed as a Meccan sura because most of it was revealed there. This is significant, because Mecca was the place that the believers were spiritually raised, while Medina was the corroboration of the time in Mecca. As a reflection of this, the Meccan suras often had the theme of spiritual development, with reminders to remember Allah, as well of the afterlife. In contrast, the suras revealed in Medina focuses on various laws.

As a Meccan sura, Sura Luqman touches on subjects relating to spiritual development. This makes it a good lesson for parents and caregivers, as many of these lessons are directly connected to child-rearing themes.

In fact our mother Aisha, Allah be pleased with her, who was raised in the environment of Mecca, said, “We first learned faith, and then we learned the Qur’an, (meaning the laws defined in the Qur’an), and it increased us in faith.” She also said in another narration, “Had we learned law before faith, we would have disbelieved or become hypocrites.”

In our times, there is often an overwhelming focus on implementation of the law, before faith has taken root. This is a dangerous approach, because it can distance the person from faith.

It is important point to remember for anyone supporting a person in their spiritual development, whether they be a friend, a parent, a child, or an extended family member. When helping someone, one should try their best to nourish them spiritually, rather than simply throwing the law onto them.

Shaykh Ibrahim begins by saying that there are two keys to Paradise, both who have to be inserted into the lock together. The first one, to is to connect to Allah’s mercy through the Prophet, Allah bless him and give his peace. The second one, is to wait patiently for Allah’s blessings, which He grants as He wills.

Similarity, knowledge is of two types, kasbi and wahbi. Knowledge that is kasbi, is the knowledge that you actively seek and have to strive for. This type of knowledge is the most accessible to us.  Wahbi knowledge is a gift from Allah, which Allah gives to those whom He had favored, such as the sage Luqman, as well as the Prophets.

The Qur’an has been revealed so that people can reflect on the meaning. Imam Ali, may Allah be pleased with him, was once asked whether the Prophet singled out members of his family in order to teach them things that he did not teach the rest of the Muslims.

“No,” Imam Ali replied, “Except for something of the understanding of the Book of Allah.”

“I have left two things amongst you; if you hold onto them, you will never be led astray. The Book of Allah, and my family. They are always together, and do not depart, until they meet me at the Pool.”

In the Qur’an, God Almighty has sworn upon the land of Makkah. Shaykh Ibrahim Osi-Efa explains what the scholars understand to be the significance this oath, and the importance of the people who dwelled upon this land before and during the time of the Prophet Muhammad, peace and blessings be upon him.

Shaykh Ibrahim Osi-Efa explains the meaning of true hunger where your body is truly calling for food rather than being driven by your desires.

“You open the books of Imam Ghazali and your basking in the favours of Allah”  says Shaykh Ibrahim Osi-Efa, while introducing Imam Ghazali and the book Breaking the Two Desires from his work Ihya Ulum Al-Din.

Shaykh Ibrahim emphasizes the importance of the books of Imam Ghazali by relating insightful dreams people have had with the Imam in them and also gives a beautiful summary of how the Ihya is broken down. We thank Greensville Trust for this video. 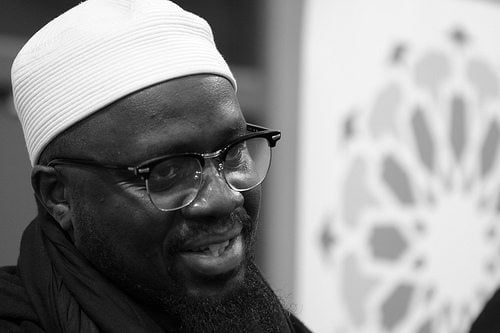 The Virtues Tour has over the years become a highlight in the calendar of British Islamic events. It’s led by Shaykh Ibrahim Osi-Efa, who is joined by Shaykh Yahya Rhodus, Shaykh Abdul Karim Yahya, Sidi Amir Sulaiman and Sidi Nader Khan.
In 2015, the tour was focused on the ethics and moral practice of prophecy. In the above recording, Shaykh Ibrahim Osi-Efa reminds us how much love the Prophet Muhammad, peace be upon him, has for those who believe in him. He has our back, as the saying goes – so much so that he, peace upon him, reminded Allah, Lord of the Worlds, of His Promise that He would not punish anyone who seeks forgiveness from Allah through the Prophet. SubhanAllah!