In this segment, Shayh Ibrahim gives commentary on the following verses, which cover Luqman’s advice to his son.

And remember, when Luqman said to his son while he was exhorting him, “O my son, do not associate [anything] with Allah. Indeed, association [with him] is great injustice.” (31:13)

The theme of exhortation, of wa’dh, is common in the Qur’an. It is defined as to censure someone, or to instil fear into their heart, to being about a state of tenderness of the heart. Therefore, it is not fear for fear’s sake, but fear for a good cause. Oftentimes, people’s hearts can become hard, and feeling some wa’dh helps reverse this.

And We have enjoined upon man [care] for his parents. His mother carried him, [increasing her] in weakness upon weakness, and his weaning is in two years. Be grateful to Me and to your parents; to Me is the [final] destination.

With a few exceptions, obedience to parents is extremely emphasised. Abusing parents is considered to be an enormity according to many Hadith.

In Sahih Bukhari, we find story of Juraij, a righteous man from the time of Banu Israel, who was worshipping in solitude when his mother called to him. Immersed in his prayer, he did not respond. Due to that, he was blamed by a prostitute for her pregnancy. The people smashed his sanctuary, until the baby, miraculously exonerated him.

[And Luqman said], “O my son, indeed if wrong should be the weight of a mustard seed and should be within a rock or [anywhere] in the heavens or in the earth, Allah will bring it forth. Indeed, Allah is Subtle and Acquainted. (31:14)

Here, Luqman’s son asks him about small sins. Luqman replies that even the smallest sin is still wrong, and Allah knows everything. 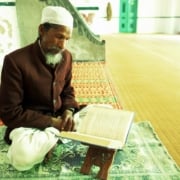