You are here: Home / Tayba Foundation

In this video, Shaykh Rami Nsour explains about the Sunnah behind the Tarawih prayers, and advises us how to best pray them.

Unity of the community is important, but so is fulfilling the Sunna. In Ramadan, we are sometimes torn between how to pray the Tarawih prayers. Some say that the prayer is 20 rakats, others say it is 8 rakats.

Shaykh Rami Nsour explains that, the first thing we should do, is not to cause disunity in the community, and go about our actions with the best possible etiquette.

He then goes on to explain about the different Sunnas relating to the Tarawih prayers, and how the Prophet Muhammad began by praying them in the mosque. However, he later prayed them alone in his home so that people would not think they were obligatory. After his death, the Caliph Umar moved the prayer back to the mosque, because people no longer felt that it was mandatory.

This case teaches us that we can do Tarawih both at home and in the masjid. In terms of length, some jurists say that even 2 rakats qualify as Tarawih prayer.

Shaykh Rami encourages us to choose whichever routine suits us best. It is good to pray at the masjid if it encourages you, but if you can maintain the routine, you can do it at home. In addition, we can pray up to 20 rakats, or less if we can’t do 20. The important thing is to do as much as you can keep up, and do it sincerely for Allah.

With gratitude to Tayba Foundation.

In this video, Ustadh Abdul Muhaymin of Tayba Foundation, discusses the types of people who are obliged to fast Ramadan.

He mentions that fasting Ramadan is obligatory on all Muslims, and tells us when we know that a child has reached puberty.

He takes us over the common misconceptions that we may have about people who are fasting. For example, it is not true that all elderly, sick, or pregnant/nursing mothers are not required to fast. Rather, they are only absolved from fasting if there is reasonable fear that they will be harmed.

He also clarifies the misconception that young children should be prevented form fasting. Rather, they should be encouraged to as much as they are able.

In the end, it’s important to remember that fasting is a command from Allah, and has many spiritual benefits. Once we realize that, it becomes much easier to answer these types of questions.

With Gratitude to Tayba Foundation

Wailing sirens introduce the opening of Tayba Foundations’s documentary, “Forgotten Believers” as the camera zooms in on endless coils of barbed wire, viciously encircling the tops of tall fences surrounding grey compounds that seem to stretch on for miles and miles. From state to state across the US, they confine approximately 90,000 Muslims who are more than just faceless bodies, but hearts so expansive that they can encompass what’s truly real.

“Neither the earth nor the sky can contain Me,” Allah SWT tells us, “but only the heart of my believing servant.” 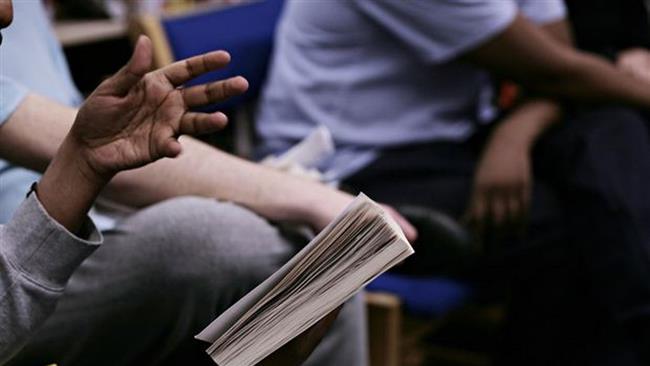 Lives Transformed by Faith Behind Bars

Tayba Foundation provides quality, college-level courses on the Islamic sciences to hundreds of inmates across the United States, focusing on refining thinking and behaviour in order to improve their transition from inmates to members of society. As the inmates have little access to learning about their faith behind bars, Tayba fulfills a vital fard kifaya (communal obligation).

So far, Tayba has changed the lives of so many people, like Anthony, who signed up for Muslim services in his Michigan prison so that he could meet his friend, but ended up becoming Muslim and now leads to Jumah prayer there. He has since learned Arabic and fiqh of two madhabs (schools of jurisprudence).

Or Stephan (Mujahid), who, after becoming Muslim in South Carolina, endured hardship from the other inmates who couldn’t accept a covert of his racial and criminal background, but still persevered and is a beautiful example of character reformation.

Or Aseem, who spent twenty years in prison after being wrongfully convicted of murder because of dubious witnesses and gang loyalty, and gained hope through Tayba.

Or Sajad, who was convicted while still a teenager, ended up with a 25-years-to-life sentence, but then pursued studies with Tayba and is now the second prisoner from San Quentin to complete a university degree.

These are just some of the many hearts who have been transformed by Tayba. However, there are so many others who are still waitlisted, such as DeAndre. Below, he expresses himself beautifully as he explaines why he would like to study with Tayba. 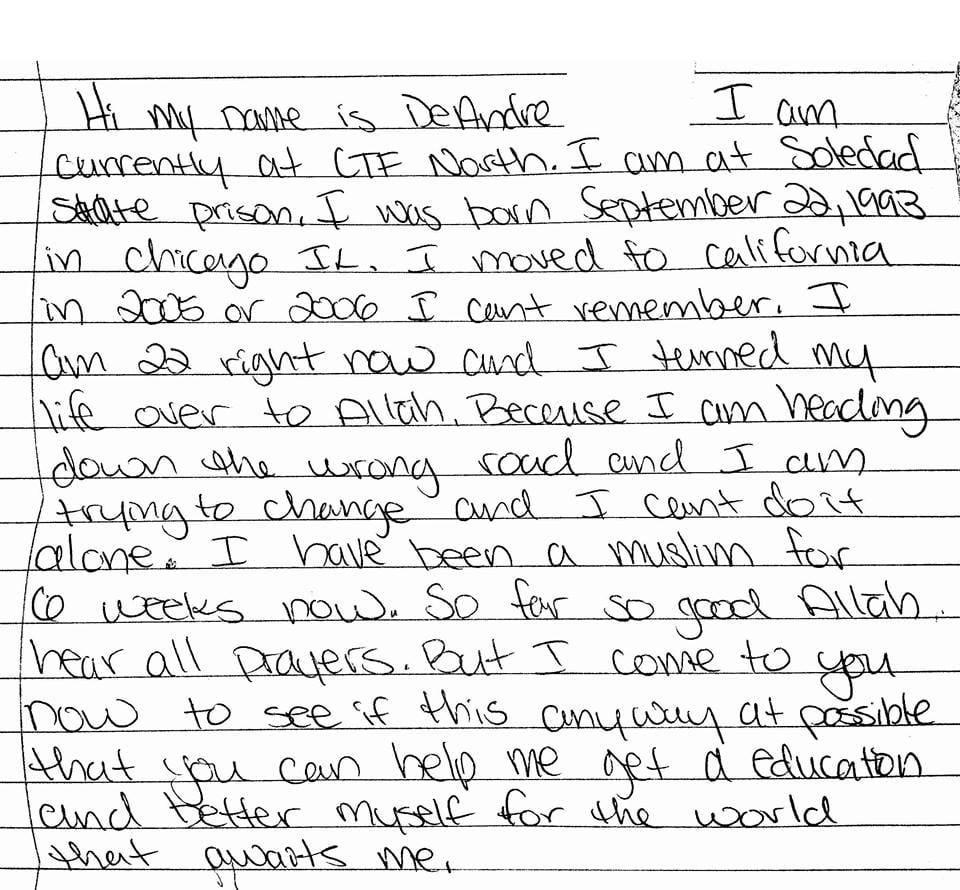 Shaykh Rami Nsour, founding director of Tayba, has files upon files of such letters, written to him from inmates who want to access Tayba’s services.

“At the end of every one of these letters is a human being, with a heart, with feelings.”

After Years of Empty Promises

“Did you feel, when you were writing those organizations, like you were stuck on a desert island putting a message in a bottle, throwing it out there, and just hoping that it would flow out to somebody?”

In the documentary, Shaykh Rami recalls asking his student about how he tried to access his faith behind bars.

“That’s exactly what it felt like,” the student replied.

Tayba sprouts from dedicated roots. Yusuf and Ansari were part of a group of inmates who were doing their best to study their religion in prison. They wrote letters to countless mosques and organizations, asking for resource material, but had only ever received one response, which had been from Zaytuna Prison Outreach. When it was time for Ansari to get paroled, Yusuf told him, “Brother, make sure you get down to Zaytuna, and find the brother.”

“I’d seen brothers (among the inmates) come and go,” recalls Ansari. “We saw Muslims leave us from that prison. They knew our dilemma, that we didn’t have no outside contact with a lot of the masaajid, so we were seeking this knowledge man, we was hungry for this knowledge, and we couldn’t get it from nobody!

“And so all these brothers they get out, they were like, ‘yeah man, I’m gonna go to this place, and I’m gonna hook you guys up, and I’m-a have people come back here, and write you and get you the material that you need’, and we says okay…and all these empty promises. Brothers got out, and nothing happened.

This was in 2002, when Ansari met Shaykh Rami, and told him about the Yusuf, left behind in prison. “You really need to help this brother further his quest for Sacred Knowledge,” he told him.

So Shaykh Rami started teaching Yusuf via collect calls, where they studied various texts by famous scholars such as Muhammad Mawlud and Imam al-Zarnuji. In 2008, they founded Tayba Foundation.

Taybe is a registered charity, so all donations are tax-deductible.

Support Tayba today, and remember that you’re investing in the future.

Tayba Foundation comes to solve the problem of lack of sound Islamic education and sacred knowledge inside prisons. There is an increase of conversion to Islam inside prisons but very little access to knowledge and teachers. Tayba have over 12 years experience in educating Muslim inmates and 400 students registered in their Fall 2015 Semester Islamic correspondence program. The number of application requests are growing every day and they need funds to embrace these students.

This is a worthy and noble cause. Want to share in the reward? Donate on their LaunchGood page today.