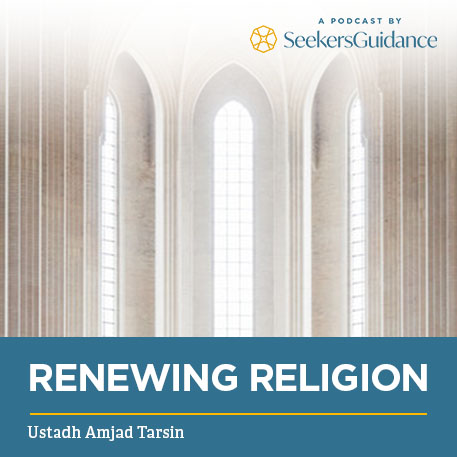 In this lesson, Ustadh Amjad Tarsin gives an overview of the chapter on zakat (alms) and charity from the Ihya Ulum al-Din (Renewing the Religious Sciences), the fifth chapter. He highlights the adaab (etiquettes) of giving charity that Imam Al-Ghazali mentions in this chapter. Ustadh Amjad also emphasizes the importance of learning the fiqh (legal rulings) of giving zakat, as well as all the other actions of worship that are personally obligatory.

Imam Ghazali says about zakat that it is one of the tests that Allah has placed for the believers. It is also one of the foundational pillars of Islam. Imam Ghazali then says that one of the wisdoms of the obligation of zakat, is because wealth is beloved to people. So sacrificing what is beloved for the sake of Allah is a sign and indication of loving Him.

He then goes to outline the different levels of people who give charity. The highest level is to give everything for the sake of Allah Most High, unconditionally. At that level, Ustadh Amjad recounts the example of Abu Bakr as-Siddiq (may Allah be pleased with him), who gave all of his wealth to the Prophet peace and blessings be upon him for the benefit of the Muslims.

Ustadh Amjad then looks at some of the adaab (etiquettes) that Imam Ghazali mentions about giving out zakat and charity. The first one he mentions is giving charity secretly, and the great merit in doing so. Giving charity in private is closer to sincerity and guards from falling it showing off and ostentation. He gives the example of Imam Ali Zain al-Abidin the great grandson of the Prophet (peace and blessings be upon him), and how he used to personally carry money to the poor in the depths of the night.

Another etiquette Ustadh Amjad highlights is to not destroy charity by holding oneself in favour over the person they gave the charity to. Allah says in the Quran that doing so, nullifies the charity and hurts the receiver of charity. Imam Ghazali mentions that cure for this, is for the one giving charity to see themselves as the ones being in need of help and favour by giving charity.

Finally, Ustadh Amjad advises that when giving charity, one shouldn’t expect anything in return, and do it purely for the sake of Allah, as is mentioned in the Quran. He explains also that one shouldn’t fear decrease in wealth because of giving charity. Rather, the reality is that it is a means of increase and blessing in one’s wealth.