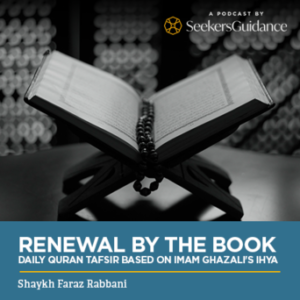 In this re-broadcast lesson, Shaykh Faraz Rabbani gives an overview of select verses from the Quran that correspond with the chapters on understanding the heart and disciplining the self from Imam Al-Ghazali’s Ihya. This topic is at the heart of our deen and is important to understand.

The lesson will overview the verse 7-10 from Chapter 91 of the Quran. The 91st chapter of the Quran includes the longest chain of oaths, where Allah swears by His signs to emphasize what is being sworn about because it’s real, important, and urgent. In this chapter, the oaths lead up to an oath about the self and how He formed it. وَنَفْسٍ وَمَا سَوَّاهَا فَأَلْهَمَهَا فُجُورَهَا وَتَقْوَاهَا قَدْ أَفْلَحَ مَن زَكَّاهَا وَقَدْ خَابَ مَن دَسَّاهَا And [by] the soul and He who proportioned it; And inspired it [with discernment of] its wickedness and its righteousness; He has succeeded who purifies it, And he has failed who instills it [with corruption]. [Quran, 91: 7-10] Allah swears by the self and how He has formed it. The reason this is in the 3rd person is that it gives greatness to the One saying it.

The marvel of the self here is explained by Allah in the following verses, that it is marvelous because Allah has granted it the inclinations to either be rebellious or righteous; making it a tremendous sign of Allah.

The series will follow the thematic order of Imam Ghazali’s Ihya Ulum al-Din (Renewing the Religious Sciences). The aim is to connect the key verses of guidance from the Book of Allah with the blueprint of renewal, the Ihya, so that we experience a renewal by The Book.