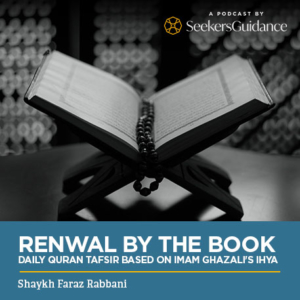 In this re-broadcasted lesson, visiting scholar Shaykh Riad Saloojee reviews verses from the Quran that correspond with the chapter on the Lawful and the Prohibited from Imam Ghazali’s Ihya. Shaykh Riad covers verse 51 from Chapter 23, verse 109 from chapter 9 and verse 23 and 24 from Chapter 83. يَا أَيُّهَا الرُّسُلُ كُلُوا مِنَ الطَّيِّبَاتِ وَاعْمَلُوا صَالِحًا إِنِّي بِمَا تَعْمَلُونَ عَلِيمٌ [ Allah said], “O messengers, eat from the good foods and work righteousness. Indeed, I, of what you do, am Knowing. [Quran, 23:51] In this verse, Allah shows that there is a relationship between what I consume and our spiritual state; as well as between our spiritual state and the actions that follow from that.

Shaykh Riad explains that there is a relationship between the inputs we take in of halal food and earning and the output that they yield in terms of spiritual, emotional and intellectual states. That is why Allah instructs us to be wise and careful in what we choose to consume because of the impact it has on our being. كلا بل ران على قلوبهم ما كانوا يكسبون كَلَّا إِنَّهُمْ عَن رَّبِّهِمْ يَوْمَئِذٍ لَّمَحْجُوبُونَ No! Rather, the stain has covered their hearts of that which they were earning. No! Indeed, from their Lord, that Day, they will be partitioned. [Quran, 14-15:83] Those who continually consume that which is unlawful will become spiritually blinded such that they will be no longer able to distinguish between that which is lawful and unlawful. Instead, they will begin to justify it and no longer see it for what it is. Shaykh Riyad warns us, that this then becomes a slippery slope that can lead one very far away from Allah.

Lastly, Shaykh Riad reminds us to continually pray that Allah suffices us with the Halal instead of the Haram and allows our hearts to attain freedom through you without need of anyone or anything else.

In this series, Shaykh Faraz, and the other scholars and teachers will be looking at points of reflection from key verses in the Quran. The series will follow the thematic order of Imam Ghazali’s Ihya Ulum al-Din (Renewing the Religious Sciences). The aim is to connect the key verses of guidance from the Book of Allah with the blueprint of renewal, the Ihya, so that we experience a renewal by The Book