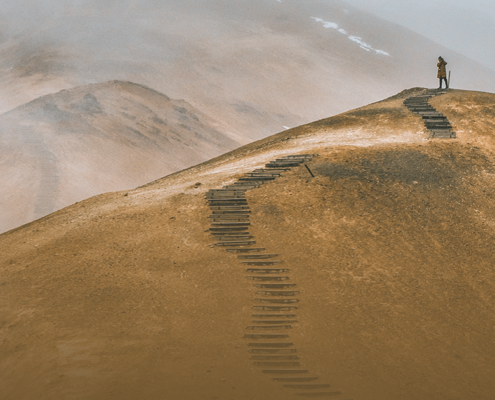 The inner image of the heart (qalb) is its character, or khuluq.  Evil character (khuluq) is due to the impact and stranglehold of the lower self (nafs) upon the heart and its lack of refinement and reformation.

Ostentation or showing-off (riya) is the opposite of sincerity (ikhlas). Ostentation (riya) is to seek the pleasure of other than the Divine in worship.  It is termed the minor association, or shirk, with the Divine for this reason.

Lying (kadhib) is the opposite of truthfulness (sidq).

Treachery (khiyana) is the opposite of trustworthiness (amana).

Pride (kibr) is the opposite of humbleness (tawadu’).  Pride is when one deems oneself better than others and rejects the truth when exposed to him or her.

Delusion (ghurur) is when one thinks that he or she possesses a quality or attribute that they do not have.  It is the opposite to seeing one’s reality as it is.

Self-aggrandizement (‘ujb) is when one possesses a quality or attribute but deems that to his own talent and efforts.  It is opposite to attributing that quality to Allah.

Vulgarity and lack of modesty (badha’a) is the opposite of modesty (haya’).  Vulgarity is a lack of spiritual sensitivity to the Divine and to His creation.

Heedlessness (ghafla) is the opposite of being in a state of remembrance (dhikr) of the Divine.

Ignorance (jahl) is the opposite of knowledge (‘ilm).

Miserliness (bukl) is the opposite of magnanimity (karam).

Rancour and malice (ghill) is the opposite of having a heart freed from such emotions.

Covetousness (tama’) is the opposite of contentment (qana’a).

Love and attachment to the world (hubb al-dunya) is the opposite of abstinence and spiritual ascetism (zuhd).

Haste (‘Ajala) is the opposite of deliberation (ta’anni).

Doubt (shakk) is the opposite of certainty (yaqin).

Laziness (kasl) is the opposite of resolution and striving (mujada).

These vices are only a sampling. There are others.  However, they give examples of spiritual ailments that stem from the lower self’s (nafs) primary inclinations of carnal desire (shahwa) and intellectual caprice (hawa). They further illustrate the subtlety of the many diseases of the lower self and the essential importance of purifying it.  And, lastly, for our specific purpose, they provide a bridge into how these ailments are projected upon our activism rendering our actions unjust, unwise, vainglorious, hasty, spiteful, false, treacherous, dubious – and the list goes on.

The activism of the activist must make him or her a key to virtue and a lock to vice.  But if I am ignorant of the vices within me and negligent in changing them, I will become a lock to virtue and key to vice – all the while preaching a gospel of productive and progressive change.