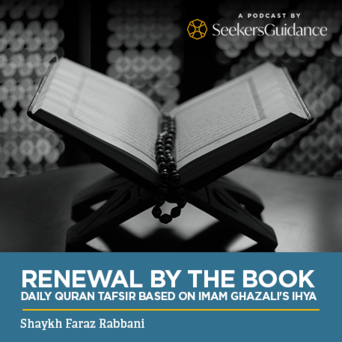 In this lesson of Renewal by the Book, Shaykh Faraz reviews verses from the Quran that correspond with the chapters on Divine Oneness, hope and fear in Imam Ghazali’s Ihya.

قُلْ يَا عِبَادِيَ الَّذِينَ أَسْرَفُوا عَلَىٰ أَنفُسِهِمْ لَا تَقْنَطُوا مِن رَّحْمَةِ اللَّهِ ۚ إِنَّ اللَّهَ يَغْفِرُ الذُّنُوبَ جَمِيعًا ۚ إِنَّهُ هُوَ الْغَفُورُ الرَّحِيمُ
Say, “O My servants who have transgressed against themselves [by sinning], do not despair of the mercy of Allah . Indeed, Allah forgives all sins. Indeed, it is He who is the Forgiving, the Merciful.” [Quran, 39: 53]
In this verse Allah guarantees that He forgives all sins if one repents from them and even if one does not repent then the matter is to Allah’s will to forgive the person even if they haven’t repented. As such, there is none that is as forgiving as Allah, He is the most Merciful.

وَلَسَوْفَ يُعْطِيكَ رَبُّكَ فَتَرْضَىٰ
And your Lord is going to give you, and you will be satisfied. [Quran, 93:5]
In this verse, Allah tells us that our hope should be placed in the Hereafter and not in this life. This life is meant to be testing, but the greatest reward will be given in the Hereafter. In this verse the term Rabb is used to denote that Allah is the One who cares for us, continually, towards our ultimate good; the only condition for this is for us to accept the way of the Prophet, peace be upon him.

Verses of Fear:
وَاتَّقُوا النَّارَ الَّتِي أُعِدَّتْ لِلْكَافِرِينَ
And fear the Fire, which has been prepared for the disbelievers. [Quran, 3:131]
We fear Allah because we know Him, because just as He is Merciful He is Majestic and All Powerful. Thus one needs to be cognisant of the station of our Lord. One should understand the verses of the Quran personally, so when it talks to the disbelievers or the Pharaoh one should not take that to mean people other than themselves, it can apply to you as well.

وَقَدِمْنَا إِلَىٰ مَا عَمِلُوا مِنْ عَمَلٍ فَجَعَلْنَاهُ هَبَاءً مَّنثُورًا
And We will regard what they have done of deeds and make them as dust dispersed. [Quran, 25:23]
This verse reminds us to not just assume that our actions will be accepted because acceptance is dependent on our sincerity. Shaykh Faraz explains that actions are but an empty shell whose life giving reality is sincerity.

In sum, Shaykh Faraz concludes that this all returns to knowing Allah and the ultimate testament of faith is to know that there is no God and no one that we are in need of except Allah. Then one should live by the Prophetic Sunnah through their belief and action that emulates the Prophet, peace be upon him.

In this series Shaykh Faraz, and the other scholars and teachers will be looking at points of reflection from key verses in the Quran. The series will follow the thematic order of Imam Ghazali’s Ihya Ulum al-Din (Renewing the Religious Sciences). The aim is to connect the key verses of guidance from the Book of Allah with the blueprint of renewal, the Ihya, so that we experience a renewal by The Book.