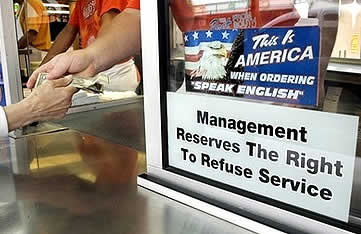 This week, an American school’s foreign language department arranged for the US Pledge of Allegiance to be read in a different language each day for a week. The day it was Arabic’s turn, things didn’t go down very well. The school district superintendant, Joan Carbone, told the Times Herald-Record newspaper that the Arabic pledge had “divided the school in half” and that she had received numerous complaints.

A statement from the local district apologised “to any students, staff or community members who found this activity disrespectful” and said the reading was intended to “promote the fact that those who speak a language other than English still pledge to salute this great country”.

The Council of American-Islamic Relations  (CAIR), said: “The meaning of the Pledge of Allegiance is the same regardless of the language in which it’s recited. When a simple student activity designed to promote mutual understanding receives such a negative reaction and the school in which it takes place is forced to issue a public apology, all Americans who value our nation’s history of religious and ethnic diversity should be concerned. One has to wonder if such an intolerant response would have resulted from reading the pledge in a language other than Arabic.”

Also in response, the British Council opined that Arabic should not only be celebrated in public schools, but systematically taught as part of the curriculum: “A study of Arabic opens up endless possibilities and opportunities for those who embark upon it. A rich and sophisticated language, spoken in many varieties throughout the Middle East and North Africa, it is both challenging and rewarding to learn. A knowledge of Arabic is instrumental to gaining a real understanding of the peoples, societies and politics of the Arab world, and accessing a range of employment opportunities in the region’s finance, media and commercial sectors. As its social, political and commercial importance increases, demand to learn Arabic is set to grow.

“Knowledge of Arabic among young people in the UK also brings wider benefits, including a deeper mutual understanding between our communities and the chance to restore much of the trust that has been erased over the last decades as a result of political circumstance and military interventionism. Those who learn Arabic will move beyond the shallow media stereotypes to a fuller, more authentic awareness of the Arab world.”