Today, February 25th, will be a worldwide celebration of Prophet Muhammad, upon him peace and blessings. Millions of Muslims worldwide commemorate the Prophet Muhammad, by remembering his life, teachings and character. And for the first time ever, with the growing popularity of social media – this year, CelebrateMercy.com will host an online celebration to facilitate people everywhere—both those who are Muslim and those who are not—to celebrate his life with prominent world figures, scholars, and performers.

Yusuf Islam, the former Cat Stevens; Dalia Mogahed, a member of the Advisory Council to President Obama; the President of the Muhammad Ali Center; and several other notable Muslim scholars and artists will be presenting.

The event has received registrants from 40 countries. Viewing centers are being set up in many communities, including cities in New Zealand, India, UK, Canada, Pakistan, Saudi Arabia, and Australia.

Prophet Muhammad was born in Mecca (in modern day Saudi Arabia) in 670 AD. Muslims believe that he was the last in a series of prophets chosen by God, and the teachings revealed to the Prophet Muhammad form the basis of the religion of Islam. Over one billion people worldwide commit to his teachings, and he is thought by many—Muslim and non-Muslim alike—to be one of the most influential people in history.

One rarely imagines a figure more talked about, revered by over 1.5 billion Muslims, yet remains virtually unknown in reality to the rest of the world. 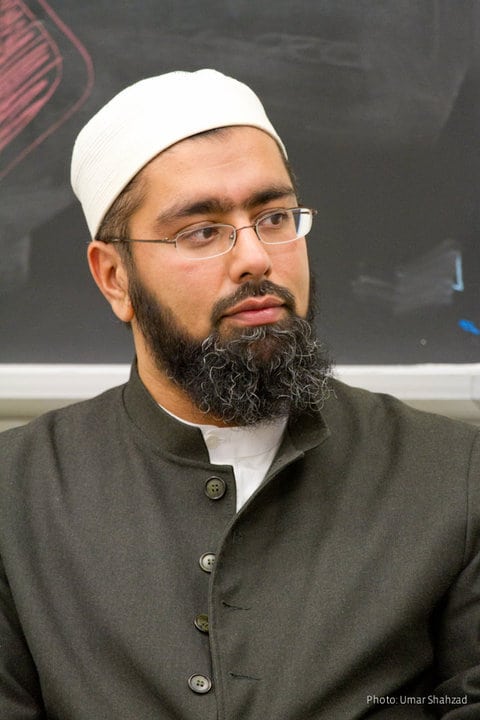 I have contacted CelebrateMercy.com to request an interview by one of the scholars who will speak at the event. Shaykh Faraz Rabbani is a notable researcher and scholar in Islamic Studies. He is the educational director and Instructor at SeekersGuidance – an online academy on Islamic Studies.

In this interview, Shaykh Faraz discusses his personal love and admiration for Prophet Muhammad, upon him peace and blessings, and the journey in knowing him.

Wazwaz: Why do you personally love Prophet Muhammad, upon him peace and blessings?

Wazwaz: How did you come to know Prophet Muhammad, upon him peace and blessings?

Shaykh Rabbani: Growing up as a teen in Spain, going to private British High School, we were taught at home about the Prophet, religion and so on. But religion seemed very distant from the social reality I was surrounded by. From the beginning – one thing that truly attracted me to the Prophet, upon him peace and blessings, was stories that would be read to me by my paternal grandmother who used to live with us and by my own mother and that I would hear from my maternal grandfather.

And these stories gave a connection to the Prophet, upon him peace and blessings, at a time when otherwise religion did not have a very central part in my life. As I was finishing high school and entering University and there is a lot of questions on who am I and what does it mean to be a Muslim, identity and so on. One thing that made me earn to strive to be a better Muslim, and to change my ways of life was the beautiful example of the Prophet. If you think of the Prophet, you can’t help yourself but to stop and say wow, that’s amazing.

Wazwaz: Tell me the first personal memory where you felt a connection to Prophet Muhammad, upon him peace and blessings, and why?

The way the Prophet wanted to convey guidance to his people. One of the first books I read about the Prophet was Martin Lings’ biography, “Muhammad: His Life Based on the Earliest Sources.” 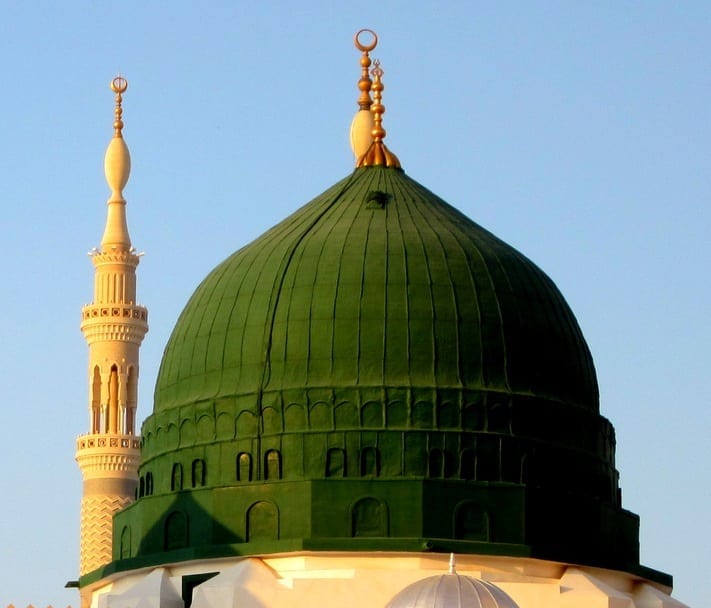 Wazwaz: When you share his life story – what major event or saying do you find important to share with students or your children?

Shaykh Faraz: With his life story, every aspect is light. A few things that really hit me – one is that when – in the early years of Islam, when the message of Islam started spreading, and the Meccans had reached their limit, in trying to figure out how they could stand fast against the Prophet. They sent one of their notables, Abu Sufian who later becomes a Muslim and a noble companion. But he was one of the elders of the tribe of Quraish. They sent him to the emperor of Rome, basically to complain about the Prophet. He went to complain that he is calling our people to worship of other than the gods of our ancestors. The emperor told Abu Sufian, well tell me about him. Abu Sufian is trying to complain about the Prophet, but all he could do was to praise the Prophet’s character and the way he treats the orphan and the stranger and his generosity and his nobility and his truthfulness.

And the Arabs say “Virtue is that which one’s enemy bears witness to.”

That really struck me that even the Prophet’s enemies could not help themselves but to admire the Prophet. It really struck me as well how he conducted himself in victory. Because in victory, growing up I read a lot about history and you see in history how victors treat the vanquished. But then you saw the Prophet when he entered Mecca after almost two decades of opposition. He entered victorious. Yet, he entered bent over on his camel in worship with his head, in thankfulness to Allah, with his head almost touching the back of the camel.

And the Prophet – When he entered, the Meccans were terrified that they thought there would be a bloodbath. That was the way of the worldly. If you won you want to show whose boss and who’s in charge and who won. But the Prophet simply called out, told them not to worry and to come out and they were safe. Today I say to you as Prophet Yusuf said to his brethren. There is no blame on you today. We are but brethren. May Allah forgive us and you. There is no blame on you today. May Allah forgive us and you. The words of Prophet Yusuf are mentioned toward the end of Surah Yusuf. This is the noble victor. His character was tremendous because he had no concern other than Allah.

Similarly, his clemency in battle of Uhud. Initially, the Muslims were winning. The Prophet, upon him peace and blessings, told the Muslims who were standing on Mount Uhud not to come down from the mountain even if the Muslims seemed to be victorious, unless and until the Prophet gave them the explicit permission to do so. Yet, some did not heed his call and came down the Mountain, and so the Quraish launched a counterattack. In that counterattack, since they were few in number, their primary concern was to strike fast, kill the Prophet and leave. And in that retreat, the

Prophet’s noble face was bleeding, and as he wiped the blood off his noble face, he called upon Allah – how can a people succeed who make blood flow down the face of their prophet while he is but calling them to paradise. Think of the power of these words. His concern even when they are trying to kill him is for their success. He was sent a mercy to All creation, not only friend but also foe. He had no enmity to them as people whatsoever. He wanted the good for them.

And the thing that saddens me as someone who teaches the religion, is how badly people misunderstand the prophetic guidance both non Muslims and Muslims themselves who don’t really appreciate the tremendous mercy that is the Messenger. His teachings and example are nothing but a manifestation of mercy. And any understanding of religion that is lacking in mercy is lacking in understanding and it is lacking in being true to the teachings of the Prophet, upon him peace and blessings.

Wazwaz: How do you share his life story with your kids?

Shaykh Faraz: By encouraging them to read about the life of Prophet Muhammad, upon him peace and blessings, and reading to them about his life, and bringing that life story to life. One has to instill love for the Prophet in the hearts of children. There is a prophetic tradition that raise your children on three matters. The love of the Quran, and the love of the Messenger, and the love of the family and companions of the Prophet. As one of great scholars says, Love is the access around which all good revolves. And the prophet said, whoever loves God and his messenger above all else has truly tasted the sweetness of faith. We want our children to turn to religion and to be virtuous, upright human beings.

Wazwaz: What resources or recommendations do you have for people to learn more on his life.

Shaykh Faraz: We would invite everyone to read about his life. A few of the books that come to mind immediately:

Martin Lings’ biography, “Muhammad: His Life Based on the Earliest Sources.”

Shaykh Hamza Yusuf from Zaytuna has a good CD set on the life of Prophet Muhammad.

Wazwaz: What is your favorite hadith or one of his sayings and why?

Another of my favorite sayings is: “The strong believer is better and more beloved to Allah than the weak believer, though there is benefit in both. Be avid for all that benefits you. Place your trust in Allah and do not deem yourself incapable. And if you did something then never say after it, had I done such and such – it would have been such and such. For saying had I, opens the doors to the workings of the devil.”

The hadith means, one should not second guess. The strong believer is always avid for what benefits them and who seeks what benefits them, what is most pleasing to Allah while relying on Allah, and who do not deem themselves incapable. Rather, one seeks their benefit while trusting upon their lord. While acting one does not second guess. One learns and takes heeds from one’s mistakes but one keeps one’s focus on what’s coming.

Wazwaz: Thank you very much Shaykh Faraz for the Interview. If anyone wishes to attend the event visit CelebrateMercy.com