Don’t Wake Him Up – Short Story by Novid Shaid 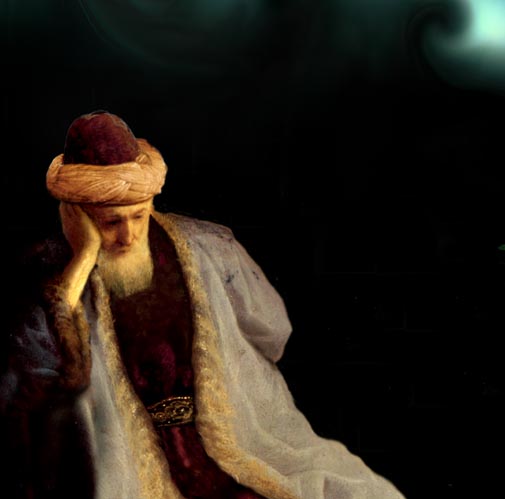 “Whatever you do …. Don’t wake him up!”
First he warned him, in a quiet and careful voice, but then, as they began descending the plummeting flight of stairs, which disappeared into the darkness below, the voice grew in desperation.
“Don’t wake him up…You’ll regret it, I tell you, you’ll regret it, we’ll all regret it. Please!” And now he began kicking his legs about. “Don’t wake him up!!!”
Lowwaam stopped his descent, becoming irritated by his little brother’s chicken legs, wriggling around his shoulders and neck.
“I told you Ammara, I will not change my mind. There’s no other way.”
Ammara arched over, staring Lowwaam in the face upside down, like a baby monkey perched on its mother’s shoulders. “There is another way…”
“No! We’ve been through this before,” Lowwaam took another step down.
“Yes, there is a way! Please stop!” Ammara’s little voice hissed, bitterly, echoing around the vast staircase. “We can go on as we have before. But if you wake him up…You know what he can do…There will be no stopping him. Do you understand!?” Desperation rang out from his voice.
“Lowwaam!” Ammara’s shrieking lament melted into the darkness that they descended into. Lowaam continued down the ancient steps, resolute and full of regret.
After what seemed an eternity of walking down and down, lower and lower into the hidden depths, they came to a halt, for before them stood a rusted, iron door. The tiny figure cowered, as he perched on his brother’s shoulders, holding on for dear life. His initial warning had now become a barely audible defeated whisper that he repeated: “Please, don’t wake him up.”
Lowwaam gazed mournfully on the now withered sign which he had hung around the great knocking rings next to the handles. The two engraved words were covered in dust: “Never Enter.” Disregarding his own warning, he pulled with all his might on the handle, while his brother held on tightly, and after some effort forced open the heavy door.
He looked on and regarded the crypt with dread. It had been so long since he had been here. In fact, the last time he had come, was to get rid of him once and for all, to hide him away, before he could be discovered; their brother. But the guilt was too much. He had to wake him up again.
Lowwaam stepped carefully into the crypt. The torches along the cold brick walls and alcoves still fired away, providing enough illumination for him to see. The crypt had remained exactly the way he had designed it: bare and simple, except for one solitary receptacle which lay alone, in the silence and the deep.
Ammara began sobbing when his eyes noticed the sarcophagus, shaped and sculptured with that familiar face. Their other brother. The one they tried to hide.
“Please, I beg you, don’t wake him up! You will not be able to stop him!”
Lowwaam was beginning to be affected by his brother’s despair, but became resolute, and placed his fingers in the holes on the side and began pushing off the cover with all his might.
Suddenly, a few pairs of malignant eyes appeared in the corners of the crypt, glowing fiercely, threatening, peering out, enraged.
“You see… Look around you. Can’t you see what will happen?”
Lowaam ignored the voice from above and carried on pushing.
“Brother! Please!”
With an almighty final push, the top cover thrust forward, toppling onto the dusty floor. Ammara turned away, shaking in a fit of terror.
Lowwaam looked down at the sleeping figure of his twin brother, who still lay there as they had left him.
“Wake up, dear Mulham..”
The figure rose up in an instant, Ammara froze, Lowwaam looked down, remorseful. The twin opened his eyes, and suddenly, a blinding light issued forth from his heart, filling the crypt and the world around him. After a wonderful moment of clarity, Mulham looked around and smiled. Ammara and Lowwaam were gone.
Only one brother left the room, Mulham, who made his way up the stairs, smiling and resplendent, whispering with a deep resonance:  O Lord, inspire me to do good and make me of the righteous.”
Notes:
This short story was inspired by a work of Sufism written by Shaykh Abdul Khaliq Al Shabrawi and translated by Dr Mostafa Al Badawi, May Allah reward them. The book is entitled: “The Degrees of the Soul”.
In the book, the first three levels of the human soul’s ascent and transformation from being dissolute to perfect are as follows: (there are seven levels altogether)
An Nafs Al Ammara: The Soul Inciting To Evil
An Nafs Al Lowwaama: The Reproachful Soul
An Nafs Al Mulhama: The Inspired Soul
Shaykh Shabrawi’s presentation of the rising levels of the human soul is based on Quranic terminology and themes.
For further reading try: “The Degrees Of The Soul” By Shaykh Abdul Khaliq Al Shabrawi, translated by Dr Mostafa Al Badawi.
http://www.amazon.co.uk
www.novid.co.uk
https://seekersguidance.org/svg/Logo/SG-Logo-Main.svg 0 0 Content Team https://seekersguidance.org/svg/Logo/SG-Logo-Main.svg Content Team2012-06-07 09:42:262019-03-26 12:56:20Don’t Wake Him Up – Short Story by Novid Shaid

A Reminder for Teachers: The Need for Sincerity, and the Dangers of Seeking Prestige and the Praise of Others – Imam Dhahabi

The Man Who Loved to Burn The Book – By Novid Shaid

Prayers on the Prophet for the Night Journey