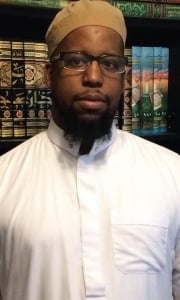 By Aneesa Alphonsus & Erin Rutherford
A soft-spoken teacher and guide of the Islamic faith, Ustadh Abdul Latif-Al Amin prefers speaking about Islam rather than himself. A hunger for a bigger purpose in life, a thirst for knowledge and a sense of belonging led Abdullatif to the path of Islam 18 years on Friday the 13th, a date most cringe from but one embraced by the Ustadh as his call to submitting to the will of Allah.
Growing up just down the street from a Muslim School in the United States, Abdullatif shares that this is where his introduction to Islam was first made. He would later credit the Muslims he met as those who made Islam very appealing to him by way of the examples they set. “I saw kindness a kind of peace in the way they acted. The Muslims I met were humble, courteous and their simple yet genuine actions spoke volumes to me.” he shared.
This sparked the flame of what he refers to as “a need to learn about the faith and to practice it wholeheartedly. While the intention was there, Abdullatif confesses that several of the early years following his conversion were spent as an “ignorant worshipper.”
“After realizing this feeling, I registered for a Deen Intensive program and Alhamdulillah, it really made a positive change and impact in my life,” he added. During the next five years, Abdullatif completed a large number of courses in addition to studying Arabic.
Over the years as a student with SeekersGuidance, Ustadh Abdullatif has taken over 50 courses, including live courses, and some no longer available. It is this kind of serious commitment to knowledge, and the mercy of Allah (subhanahu wata’ala) that has brought him to the position he is in today.
Eighteen years on, this father to six children is still on his quest for more knowledge. To the question of approaching and learning about Islam, Ustadh Abdullatif advised that one should read about the Prophet and go to the people that best remind them of Him.

Apart from his passion for knowledge, Abdullatif tells us that he is equally ardent about helping new Muslims. “We have new brothers and sisters who after taking the Shahadaa may ask, ‘What do I do next?’ I would like to help nurture this by Allah’s grace.” Abdullatif is incidentally, the co-Founder of Mercy Islamic Tutoring, which assists reverts and Muslims to better learn about Islam’s foundation principles.
To the question what would be the biggest challenge facing Muslims today, Abdullatif opined that it’s being equipped to answer questions about their faith. “If a Muslim isn’t sure about how to answer a question, there is the pitfall that they might end up doubting their own faith. It’s okay to say, ‘I don’t know’ but point those who are asking the question to someone who knows – the same is true for the Muslim who was asked the question.”
He feels his progression as a student to a teacher is ongoing. It is also a journey that has had a lot of struggles involved in it. With thanks to Allah, he owes a lot to be in contact with supportive teachers like Shaykh Faraz Rabbani. He also feels that scholars such as Shaykh Abdul-Kareem Yahya, Shaykh Omar Qureshi, Ustadha Zaynab and Ustadha Noura, among others really helped helped him in his journey, particularly in the early days.

When questioned about ‘Knowledge Without Barriers‘ he says that, “Knowledge without Barriers has truly been a blessing for me and enabled me to study things that would be closed if not for it. Having contact with Shuyukh is a great blessing. SeekersGuidance enables one to have a personal relationship with one’s teacher. Which is key for any successful student.”
He is a firm believer that apart from time for prayer, time for deep reflection on the day’s happening should also be set aside. Abdullatif who enjoys reading Islamic books and literature, shared that reading from the Quran is important to one’s well-being. “You don’t have to read large sections, just small passages. Do what you can and what you’re able to do – but do it consistently.”
This blog is part of our Seekers Highlights series for our Ends of the Earth Campaign. We hope that you are inspired and motivated by Ustadh Abdullatif’s story. His story and many other wouldn’t be possible if it wasn’t for Knowledge without Barriers, please support us in bringing knowledge to the Ends of the Earth. Your donation truly helps!