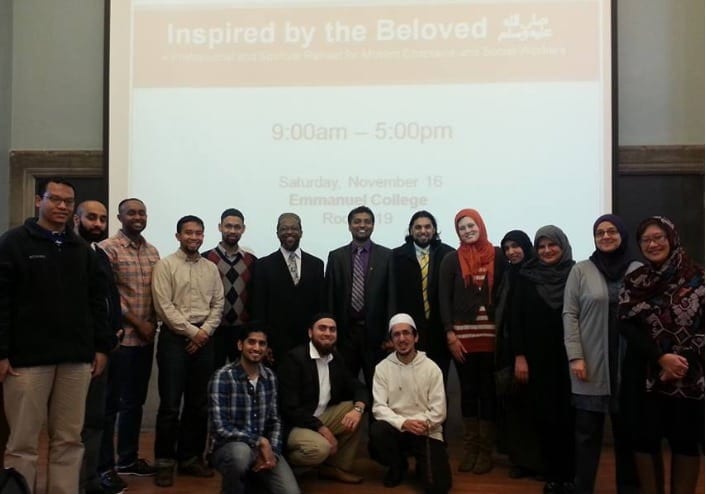 On November 16, 2013, I had the great pleasure of meeting with Muslim chaplains, social workers, counselors, and graduate students from across southern Ontario for the first (I hope of many)
Inspired by the Beloved  ﷺretreats.
The idea for the retreat actually came from Dr. Ingrid Mattson who, after moving back to Canada, encouraged me to organize an event that would bring together Muslim chaplains in the southern Ontario region. Following this, and after circulating this idea among local Muslim chaplains, I encountered Muslim social workers (passionately dedicated to their practice), who professed to be experiencing related needs. So, with this in mind, and recognizing the many similarities between our caring professions, our chaplaincy event became a retreat dedicated to caring professionals (chaplains, social workers, and counselors) who have each been inspired by the Belovedﷺ. 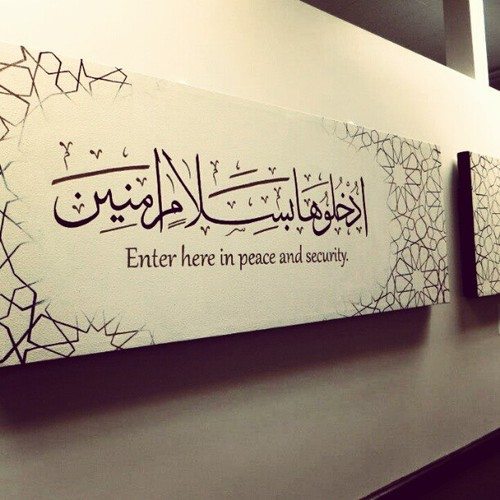 Our retreat was focused on the various ways our spirituality both impacts and is impacted by our practice as chaplains, social workers, and counselors. Following Dr. Mattson’s opening presentation (discussed below), time was provided for attendees to introduce themselves. It was exciting to hear of chaplains, social workers, and counselors coming from as far as Alberta, Hartford, Ottawa, and London for this event. Soon after this, we were engaging in a discussion on “What makes Islamic chaplaincy Islamic?” It was enlightening to hear the varying viewpoints, some in disagreement and other supporting of another’s particular perspective.
During our discussion, two articles were cited and recommended:
Dharamsi, S. & M. Abdullah (2012). Islamic-Based Interventions. In S. Ahmed & M. M. Amer (Eds.) Counseling Muslims: A Handbook of Mental Health Issues and Interventions (pp. 135-160). New York: Routledge.
Islam: Between Old Fundamentalism, New Fundamentalism and Modern Sincerity by Sherman Jackson
Later, during a case study which I facilitated with Adeel Zeb, attendees had the opportunity to role play a critical chaplaincy incident (one person playing the “chaplain,” another person playing the one seeking their help, and others observing). It was a great exercise which allowed individuals to get a feel for how they might provide care (or how they might like to receive care) in a unique and critical situation while receiving feedback from peers. It is difficult to put into words the excellent experiential learning that came out of this activity, but it was wonderful to see everyone passionately engaging the exercise and the various ways the “chaplains” sought to provide care.
And, finally, our day ended with a group reflection on a Qu’ranic verse led by Habeeb Alli, and an in-depth presentation on the signs of symptoms of compassion fatigue by AbdurRashid Taylor.
Since the event, individuals have contacted me for my notes and take away points. Thus, for their benefit, and yours, I have compiled five brief points derived from Dr. Mattson’s presentation below. I pray they are of benefit. 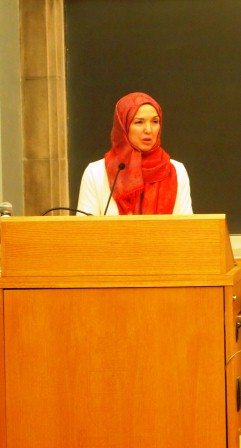 FIVE TAKE AWAY POINTS:
1. Muslim chaplaincy is an attempt to more fully implement the sunnah of the Beloved ﷺ; recognizing the importance of emulating his way of being with those he cared for in addition to following his words and actions.
2. Many who provide Muslim spiritual care do so in a directive manner; usually teaching and advising those in need. However, not all in need are ignorant or uninformed. They may benefit most from your modeling a calm-presence amidst their crisis, affirming their faith and desire to do what is right, and collaborating with them so they may reach their own conclusions.
3. In emulation of the Prophet’s sunnah, individuals may implement the form (i.e., how he did it) while neglecting the function (i.e. the purpose). For example, an individual may hold on to the hand of another (when shaking hands) without letting go in emulation of the Prophet ﷺ without recognizing that holding onto another’s hand served a purpose of letting them know: “I am here for you as long as you need me.” This was further expressed by the Prophet’s practice of turning his whole face in the direction of the one he is speaking with, letting them know that they have his full attention.
4. Chaplains specialize in caring for people in times of crisis and transition; and being in transition in life has become a general norm in contemporary North American society. Individuals, at varying times in their life, may be struggling with issues related to becoming an adult, or parent, learning how to be a husband, or wife, learning how to live on one’s own and/or away from family, and struggling with new physical, psychological, spiritual, and social challenges. And, these transitions may be an individual’s choice or forced upon them by others and/or external circumstances.
5.Chaplaincy is often times spoken of as “journeying with” or “walking beside the patient/ client/ individual.” Such language is appropriate to adopt as it is completely indigenous to the Islamic tradition. Consider, for instance, the Sirat al-Mustaqim (Straight Path), spiritual orders as turuq (pathways), or the title of Imam Malik’s famous hadith collection al-Muwatta (The Well-Trodden Path). Moreover, recall that the Prophet (peace be upon him) encouraged us to “be in this world like a traveller.” And, it was the Prophet’s custom to never travel alone.
We are hoping to meet again for another Inspired by the Beloved ﷺ retreat. If you are interested in hearing more about this, or have any questions or suggestions, feel free to contact me: [email protected]
Other blogs by Imam Ibrahim Long:
The Messenger I Love
Selected Prophetic Prayers for Spiritual, Physical and Emotional Wellbeing
“What happened to Ahmad?”: Responding to Muslim Youth at Risk