By Yousaf Seyal
Today is a big day for me. I have left my home to fly out for the journey of a lifetime; headed towards America’s first Muslim Liberal Arts School, Zaytuna College. When flying, I usually try to sit beside an elderly person to enjoy a conversation to entertain me throughout my trip. This time I found myself sitting next to Timothy and Dorothy, a Christian couple, who are travelling to visit their granddaughter in Texas for her fourth birthday. They are a couple who both take religion very seriously and try to integrate it in every aspect of their lives. In fact, both of them teach religion at their local Church’s Sunday School. My conversation with Timothy began when he asked me if I was Sikh. I informed him that I was Muslim and we began to speak about Islam. 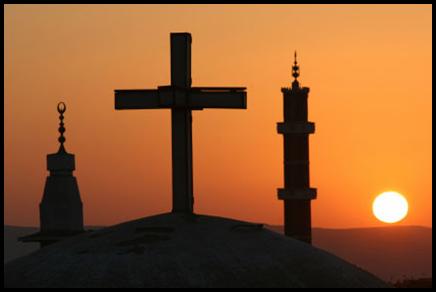 Sometimes we (Muslims) tend to believe that Islam is the ‘only’ scriptural based religion and often forget, if not neglect, very two important religions: Judaism and Christianity, who both received a complete revelation from God. In fact, God addresses these two religions in the Quran as “ahlul-kitab”or “the people of the book”. More so, God commands His Prophet Muhammad ﷺ‎ to bond with the people of the book and says

Therefore, before engaging in conversation, we both agreed to disagree, and made it clear to one another that we would respect each other firstly as brothers; brothers in humanity. Timothy began this conversation with introducing himself, and emphasized on the fact that he puts his full trust in the Christ alone. I told him that Muslims shared a similar concept of trust, but instead trusting in the One God (Allah) alone. I shared our perspective with him as Muslims; explaining to him that Jesus was a Prophet of God and how the Quran itself has a full chapter dedicated to Mary and the birth of Jesus. We also touched upon some very essential concepts of religion and spirituality such as sincerity and intention. Timothy personally does not like using the term ‘religion’ because he feels religion itself can become a mechanism or a habitual practice deploying the worshipper from the greater realities of prayer. In Timothy’s words, ‘Good works is out of a heart for God’.
Shared Ideas
I shared our understanding of worshipping God with him; to worship Him because God deserves to be worshipped. We continued to talk for nearly two and a half hours and shared stories of the Prophets such as the story of Prophet Yusuf and Abraham. Topics such as trust in God, pre-eternal destiny, and individual choice were also discussed thoroughly. Interestingly enough, we also had a brief conversation on culture and arranged marriages in the Muslim world! At this point, I am flying over Lovington, New Mexico. The very obvious term that sticks out here is love. Love as we all know is very subtle but it does not need to be limited to one specific community, gender, race, color, or religion. It is a universal which should be shared by all of its particulars. It is both a superior and inferior; sent from God Himself and revolving around all of creation. Love was never meant to be some accident, but a necessary property existing in every genus of the worlds. We are all the creation of God. God is our King and we live together under His rule. Therefore, let us learn to share this kingdom of His, spread peace throughout it, and spread joy within it. Show this world that love still exists. For most people a smile can express love. Otherwise when the sun rises to its peak, we will all drown in the selfish materialistic chocolate palaces created by our own fantasies and fallacies.

Let us strive to establish, build, and polish our palaces together with perfection in every aspect of our dealings, starting with a solid foundation of love for God and His creation. This is what it means to be God’s vicegerent on earth. Specifically addressing the Muslim community: It is our duty to spread the lights of Islam here in the West. This is no part-time job or something left for the Turks, Arabs or Pakistanis. The bare minimum upon us is to be exemplifiers of good character. The uniqueness of our Prophet Muhammad ﷺ‎ was that he was just not a prophet to those who believed in him, but a universal Prophet sent as a mercy to all of the worlds. He was a manifestation of the attribute ’rahmah’ mercy from the ‘ar-Rahman’ the all-Merciful and manifested it in his interactions with everyone. So let be among those who continue to spread this mercy; offering it to even those who reject it. As Timothy himself put it, “God didn’t say that I did not see that coming!”. He was referring to our ‘coincidental’ meeting. I also do truly feel that our meeting was no coincidence. This was the first conversation I had embarking on this new path of mine. It made me realize that the task of conveying God’s word and exemplifying good character was not to wait till I started studying formally at school, but it had already started from the moment I had stepped out of my door, to travel on this path of knowledge, earlier this morning. I felt as if God was indicating a responsibility that lays ahead of me in my upcoming journey of knowledge, action, and service. What Are the Nullifiers of Islam? The great Muslim philanthropist, Abdul-Sattar Edhi, returns to his Lord