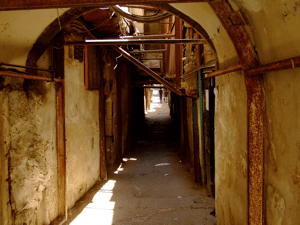 A man was walking through the marketplace one afternoon when, just as the muezzin began the call to prayer, his eye fell on a woman’s back. She was strangely attractive, though dressed in fulsome black, a veil over head and face, and she now turned to him as if somehow conscious of his over-lingering regard, and gave him a slight but meaningful nod before she rounded the corner into the lane of silk sellers. As if struck by a bolt from heaven, the man was at once drawn, his heart a prisoner of that look, forever. In vain he struggled with his heart, offering it one sound reason after another to go his way—wasn’t it time to pray?—but it was finished: there was nothing but to follow.

He hastened after her, turning into the market of silks, breathing from the exertion of catching up with the woman, who had unexpectedly outpaced him and even now lingered for an instant at the far end of the market, many shops ahead. She turned toward him, and he thought he could see a flash of a mischievious smile from beneath the black muslin of her veil, as she—was it his imagination?—beckoned to him again.

The poor man was beside himself. Who was she? The daughter of a wealthy family? What did she want? He requickened his steps and turned into the lane where she had disappeared. And so she led him, always beyond reach, always tantalizingly ahead, now through the weapons market, now the oil merchants’, now the leather sellers’; farther and farther from where they began. The feeling within him grew rather than decreased. Was she mad? On and on she led, to the very edge of town.

The sun declined and set, and there she was, before him as ever. Now they were come, of all places, to the City of Tombs. Had he been in his normal senses, he would have been afraid, but indeed, he now reflected, stranger places than this had seen a lovers’ tryst.

There were scarcely twenty cubits between them when he saw her look back, and, giving a little start, she skipped down the steps and through the great bronze door of what seemed to be a very old sepulcher. A soberer moment might have seen the man pause, but in his present state, there was no turning back, and he went down the steps and slid in after her.

Inside, as his eyes saw after a moment, there were two flights of steps that led down to a second door, from whence a light shone, and which he equally passed through. He found himself in a large room, somehow unsuspected by the outside world, lit with candles upon its walls. There sat the woman, opposite the door on a pallet of rich stuff in her full black dress, still veiled, reclining on a pillow against the far wall. To the right of the pallet, the man noticed a well set in the floor. 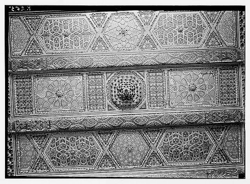 “Lock the door behind you,” she said in a low, husky voice that was almost a whisper, “and bring the key.”

He did as he was told.

She gestured carelessly at the well. “Throw it in.”

A ray of sense seemed to penetrate for a moment the clouds over his understanding, and a bystander, had there been one, might have detected the slightest of pauses.

“Go on,” she said laughingly, “You didn’t hesitate to miss the prayer as you followed me here, did you?”

“The time for sunset prayer has almost finished as well,” she said with gentle mockery. “Why worry? Go on, throw it in. You want to please me, don’t you?”

He extended his hand over the mouth of the well, and watched as he let the key drop. An uncanny feeling rose from the pit of his stomach as moments passed but no sound came. He felt wonder, then horror, then comprehension.

said, and she lifted her veil to reveal not the face of a fresh young girl, but of a hideous old crone, all darkness and vice, not a particle of light anywhere in its eldritch lines.

“See me well,” she said. “My name is Dunya, This World. I am your beloved. You spent your time running after me, and now you have caught up with me. In your grave. Welcome, welcome.”

At this she laughed and laughed, until she shook herself into a small mound of fine dust, whose fitful shadows, as the candles went out, returned to the darkness one by one.