In this article, Shaykh Faraz Rabbani explains the urgent need to #SpreadLight in our times of confusion and crisis. Support SeekersGuidance #SpreadLight by visiting our website.
The threat to religious guidance
There is a crisis in Islamic scholarship.
Due to the turbulent and unsettled state of much of the Muslim world, we face a crisis in the preservation of Prophetic guidance.
It is no longer safe for scholars or students in many of the central lands of traditional mainstream Islamic scholarship – including Syria, Yemen, and Iraq.
We personally know scholars who have been kidnapped, detained, jailed, tortured, or simply disappeared. Other scholars have been forced to flee their homes and remain in refugee camps. Still others are in foreign lands where they struggle to make ends meet.
This, instead of teaching seekers of knowledge, transmitting prophetic guidance and understanding, and spreading light in confusing times.
SeekersGuidance Global’s endeavour to spread light
Over the past few years, Seekers has comitted to assist teachers in desperate circumstances. We have been able to do so through charity and zakat funds raised specifically to help them.
A number have also been put on scholarly stipends. Now, they can devote themselves to teaching in a structured manner, transmitting the wealth of knowledge Allah has blessed them with, and training the next generation of scholars.
These are the people who will preserve and promote the beautiful and balanced way of mainstream Islam.
Among the scholars who had been affected by the economic and social instability—and resultant rising cost of living–in the Muslim world was Shaykh Ali Hani, recognized recognized by senior scholars as one of the foremost authorities in both the Arabic sciences, and the sciences of Qur’an, and Qur’anic exegesis (tafsir). Leading scholars seek him out to study under him.

An asset to the SeekersGuidance Family Like many scholars, he was struggling to simply provide for his family, and thus limited in his ability to teach, research, or write.
SeekersGuidance has brought on Shaykh Ali Hani as a dedicated researcher and scholar. Through this support, he is teaching a full curriculum of the Arabic sciences, starting with Arabic grammar (nahw), morphology (sarf), and then the Qur’anic sciences (uloom al-Qur’an), and then finally Qur’anic exegesis (tafseer).
A number of these courses are already available online, and each term, we will offer more.
Thousands of students have already benefited. Thousands will continue to.
Through SeekersGuidance Global’s support, Shaykh Ali Hani has published an acclaimed commentary on the classic Arabic primer “al- Ajrumiyya”, which has already gone into a second edition.
He is in the process of writing commentaries on a full curriculum of classical Arabic grammar study texts, making them available and accessible to today’s students.
In the upcoming years, Shaykh Ali will also embark on a complete and detailed tafsir of the Qur’an.
The next generation of scholars
We hope to make the knowledge of other leading scholars available, in order to preserve the light of the Prophetic inheritance and facilitate its transmission to future generations.
This is a critical and urgent need in our times. We owe it to these scholars, whom the Prophet (peace and blessings be upon him) himself referred to as his inheritors. We owe it to our future generations. We owe it to ourselves. 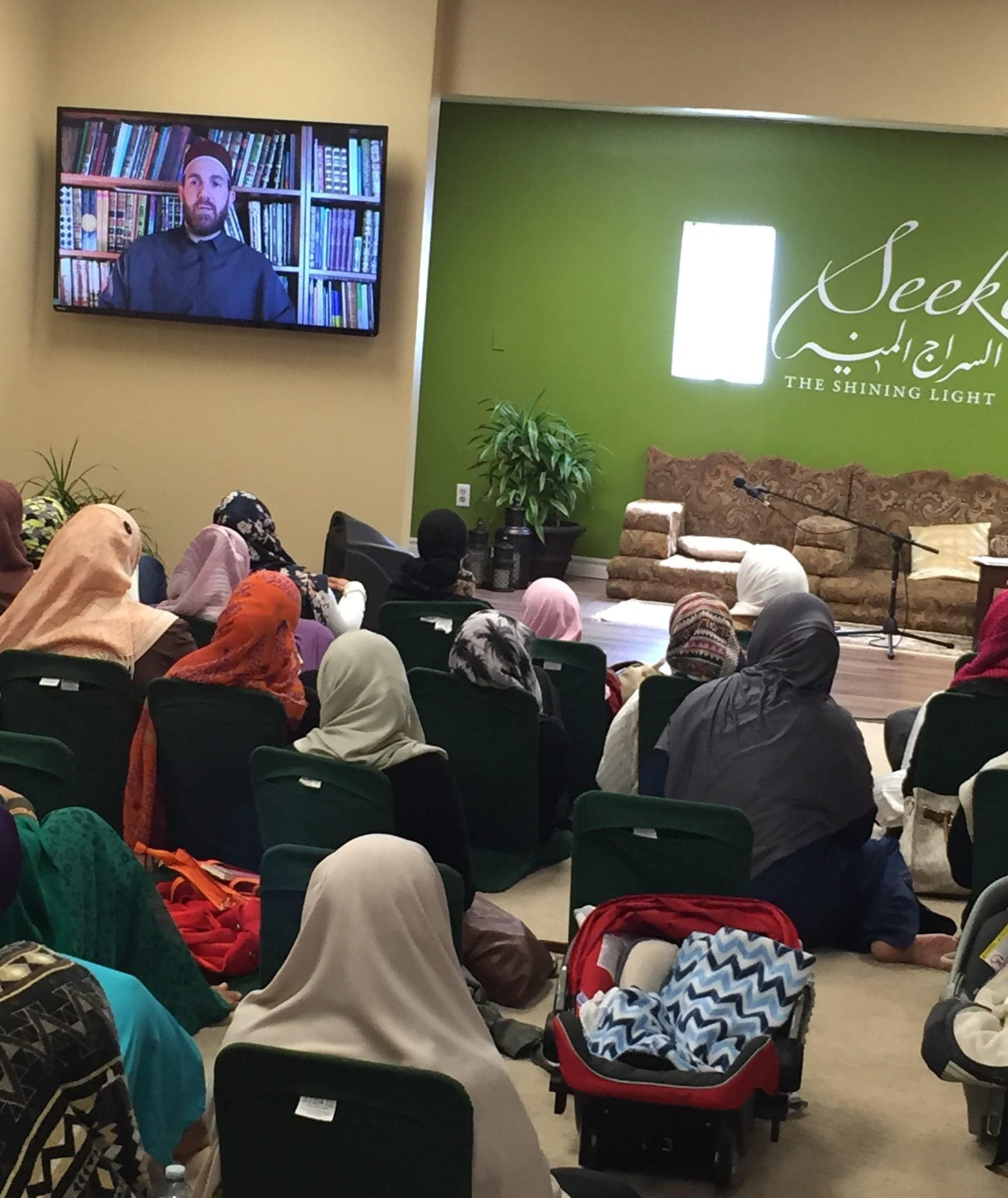 Supporting female and male scholarship
SeekersGuidance is also supporting many committed and dedicated students of knowledge, male and female, through our work-study scholarships.
This enables them to commit themselves to the path of knowledge, and provides the training, guidance, and mentorship to develop the skills needed to be effective scholars, teachers, community leaders, and inheritors of the Prophetic tradition.
The need to support such worthy students of knowledge is critical at a time when there are few reliable mainstream institutions that do the same.

Let’s not fail the next generation
If our community fails to support students who are dedicating themselves to become scholars, we will fail to preserve Prophetic guidance.
By supporting such students, we ensure the preservation of Islam in our families, our communities; We are actively participating in the preservation of God’s greatest gift to creation – the gift of Islam, the gift of the light of Prophetic guidance.
Help #SpreadLight. Help SeekersGuidance Global support needy and deserving scholars and students of knowledge. Give your Zakat generously. Actively encourage family and friends to do so. And pray for the success of this initiative to preserve and #SpreadLight – the light of the Beloved of Allah (peace and blessings be upon him).