Reproduced via https://www.sandala.org/blog/when-children-suffer-803 , with thanks. 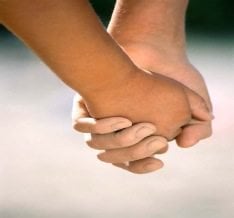 [The burning question]
I would like to write a follow up to a question someone wrote in response to a quote I posted on Facebook a few days ago. The question was regarding how God could allow the rape of a seven-year-old girl. First of all, I would request that people not be so harsh with those who have valid questions. Some Muslims are too quick to attack and condemn Muslims with doubts or troubles and actually drive them further away from Islam. I have been guilty of this myself and sorely regret being too harsh with a Saudi youth in Jeddah once who was on the verge of apostasy. At that moment, I responded as I did because I felt so troubled that someone so close to the Haram Sharif could be in that state; however, in retrospect, I realized I probably made the situation even worse. I pray for him to this day.
In Brothers Karamazov, Dostoevsky poses this modern question of the suffering children on the tongue of Ivan to Alyosha and uses it as a proof that he can no longer believe in God or rather the God who could create such a world. To his credit, Dostoevsky gives this argument the best rendering that can be found. He did not set up a straw man to knock him down; rather, he dealt with it head on.
Many young Muslims in the West and in other areas connected online are now exposed to such questions. The ancients were far too present with the divine aspect of the world to ever question God about the world, as God is the one who questions us. While theology and theodicy are long and arduous courses to take to really delve into and tackle such human problems, we still need reasonable lay approaches to help our fellow Muslims and others who are seeking answers to pressing problems. [My Response]
I want to look at a hadith that elucidates further the response I gave to the question that was posted on Facebook. The Prophet, God bless and grant him peace, said, “Whoever prays our prayer, faces our qibla, and eats our halal meat is a Muslim who has God’s protection and then the protection of God’s Messenger. So do not betray God in His protection” (la takhfiru ‘llaha fi dhimmatihi). The word has several meanings, including, “care, custody, protection, covenant of protection, compact, responsibility, answerableness, liability, inviolability, security, and conscience.” The Arabs say, “‘ala dhimmati,” meaning, “upon my word of honor.” According to this hadith, God has placed His protection over certain things – in the case of this particular hadith, Muslims, but more generally, according to the Qur’an, many other hadith, and Islamic law, His creation in the world. Hence, trees, wells, rivers, oceans, air, soil, food, animals, and most importantly people, irrespective of faith, color, or creed have God’s protection. However, God has made the human being the divine custodian of this protection. The verb khafara – yakhfuru, a variant of which is used in the hadith, means, “To watch over, to protect.” Changing the present tense form from yakhfuru to yakhfiru, as is done in the hadith, changes the meaning to, “to betray.” Hence, the protection can easily be betrayed by a slip from top to bottom, from fathah dropping down to a kasrah.
The above-mentioned hadith does not exclude people of other faiths. Those who are not Muslim, which includes people of all other faiths and not just the Abrahamic ones according to the Maliki and Hanafi schools, are people of covenant in Muslims lands, as was Ottoman practice for centuries; hence, they are called, “the covenantal people of protection” (ahl dhimmah). Included also in this category are nations that have treaties with Muslim nations and peoples in non-Muslim lands in which Muslims are living safely. In other words, all these people are in God’s and His Messenger’s protection. This is why, on the Day of Judgment, the Prophet, God bless and grant him peace, is the advocate of a person of covenant who was betrayed by Muslims against the Muslims who betrayed him.

Of all God’s creatures, it is children who warrant the greatest protection due to their helplessness and innocence, which is why the punishment for violating them is severe. The Prophet, God bless and grant him peace, loved children and honored them on many occasions, such as calling them by honorific epithets or patting young ones on the head, leaving the scent of musk upon them for the rest of the day. In fact, the Prophet, God bless and grant him peace, visited one child whose pet had died in order to offer condolences and cheer him up. The Prophet, God bless and grant him peace, also cursed those who mistreated animals and told of a person punished in the hellfire for torturing a cat; contrariwise, he told of a prostitute forgiven for giving water to a dog dying of thirst.
Terrible crimes perpetrated against children are also a sign that we not only have freewill but, according to our creed, that God is not obliged to intervene when we use it to break covenants of God’s protection and violate the inviolable. Imam al-Laqqaniy says in his Jawharah,
“The claim of the Rationalists that God must only allow benefit is a lie;
Have they not seen the suffering of children in the world?”
Finally, increasing incidents of such violations are a sign of the end of time, as the Prophet, God bless and grant him peace, said, “The time is coming when little children will be lusted after like you today have natural desires.” The ability to break this covenant of protection is called freewill. The rights and protection that God has given humans is to be upheld and honored by each of us. If anyone betrays that trust, then, in this world, the government has the authority and right to redress the wrong. In redressing the wrong, wholeness is restored, and healing can take place. If this does not occur, the victim must remember: there is a day when the divine redresser will right every wrong, heal every wound, fulfill every vow, and remove for all eternity the scars of this world that were unjustly inflicted by those who betrayed God’s protection.

This article is transcribed by a SeekersGuidance scholarship student based on th...