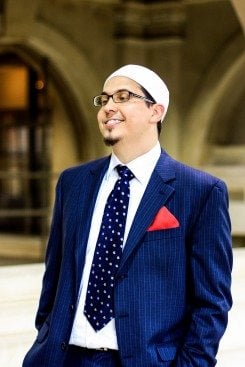 The original link can be found here
Imam ‘Abdullah bin ‘Alawi al-Haddad of Tarim, known as “The Pole of Inviting and Guiding to Allah” (Qutb al-Da‘wah wal-Irshad), was the reviver of the 12th century A.H. He was known to be a master of the inward and outward sciences of Islam, and he had a special gift for being able to convey complex meanings in a way that was understood by all.
He had a deep knowledge of Allah that only comes through the spiritual struggle of having a pure heart that is not distracted from Allah. He describes the path to such knowledge by saying,

“We have found knowledge, not by means of words and phrases, nor by jostling with other men, but by a heart freed from the world, by weeping deep in the night, and constant vigilance of the Almighty.”

Below are some pieces of guidance taken from his work, The Book of Assistance, on three ways to attain certainty (yaqīn). He begins his book with this chapter, stating that,

“…Certainty (yaqīn) is the essential thing, and all other noble, praiseworthy traits of character and good works are its branches and results.”

Certainty, as defined by Imam al-Haddad, is

“power, firmness and stability of faith so great that it becomes as a towering mountain which no doubts can shake and no illusions can rock.” The first and most essential way to attain certainty, according to the Imam, is for the servant to:

“listen attentively with his heart as well as his ears to verses and hadiths relating to God, His Majesty, Perfection, Magnitude, and Grandeur…”

The first advice here is to strengthen one’s certainty by listening with one’s heart and ears to the way Allah describes Himself, and the way His Beloved Messenger describes Him. Through constant reflection on the Quran and hadiths that relate to the Attributes of Allah, one gains certainty and light in their heart.
Here are a few verses we can ponder:

“God is the Light of the heavens and earth. His Light is like this: there is a niche, and in it a lamp, the lamp inside a glass, a glass like a glittering star, fuelled from a blessed olive tree from neither east nor west, whose oil almost gives light even when no fire touches it– light upon light– God guides whoever He will to his Light; God draws such comparisons for people; God has full knowledge of everything.” (Qur’an 24.35)

“Believers, respond to God and His Messenger when he calls you to that which gives you life. Know that God comes between a man and his heart, and that you will be gathered to Him.” (Qur’an 8.24)

“Can man not see that We created him from a drop of fluid? Yet–lo and behold!–he disputes openly, producing arguments against Us, forgetting his own creation. He says, ‘Who can give life back to bones after they have decayed?’ Say, ‘He who created them in the first place will give them life again: He has full knowledge of every act of creation. It is He who produces fire for you out of the green tree–lo and behold!–and from this you kindle fire. Is He who created the heavens and earth not able to create the likes of these people? Of course He is! He is the All Knowing Creator: when He wills something to be, His way is to say, “Be”– and it is! So glory be to Him in whose Hand lies control over all things. It is to Him that you will all be brought back.’” (Qur’an 36.77-83)

2. Marvels of Creation
The second method recommended by Imam al-Haddad is to reflect on the creations of the heavens and earth. As Allah mentions in the Quran,

“We shall show them Our signs in every region of the earth and in themselves, until it becomes clear to them that this is the Truth.” (Qur’an 41.53).

Being people of reflection (tafakkur) helps us ponder the marvels of Allah’s Power, which also brings about a deeper knowledge of Allah’s Attributes and Acts, once again strengthening the certainty in one’s heart.
Allah mentions those who reflect in the Qur’an:

“There truly are signs in the creation of the heavens and earth, and in the alternation of night and day, for those with understanding, who remember God standing, sitting, and lying down, who reflect on the creation of the heavens and earth: ‘Our Lord! You have not created all this without purpose–You are far above that!–so protect us from the torment of the Fire.’” (Qur’an 3.190-191)

3. Faith & Action
The third method mentioned by Imam al-Haddad to attain certainty is for one to firmly and passionately perform the actions related to belief, both inward and outward. One of the ways that faith becomes firm in the heart is through putting it into action.
Seeking knowledge is not meant to be the pursuit of information to be used in intellectual debate, but rather as a path to knowing Allah and worshipping Him properly. Imam al-Haddad says that the proof that this brings certainty is Allah’s saying,

These are three ways that bring certainty to the heart and below is a diagram that breaks these steps into parts. Every believer is capable of seeking certainty in this way.
Let us make time in our day to read the Qur’an with attentiveness so that it pierces our hearts; reflect on the marvels of Allah’s creation in nature; and strive to express our servitude in action and worship.

May Allah reward the Imam for his sincere concern and counsel to the believers.
We ask Allah for an increase in iman and the highest levels of certainty so that we may worship Him as though we see Him.
And success is from Allah and His assistance is sought.
Relevant resources:
Certainty vs uncertainty: Thoughts on the Occasion of the Middle Night of Shaaban – Shaykh Jihad Hashim Brown
Key Principles Relating to Certainty, Doubt, and Baseless Misgivings (waswasa)