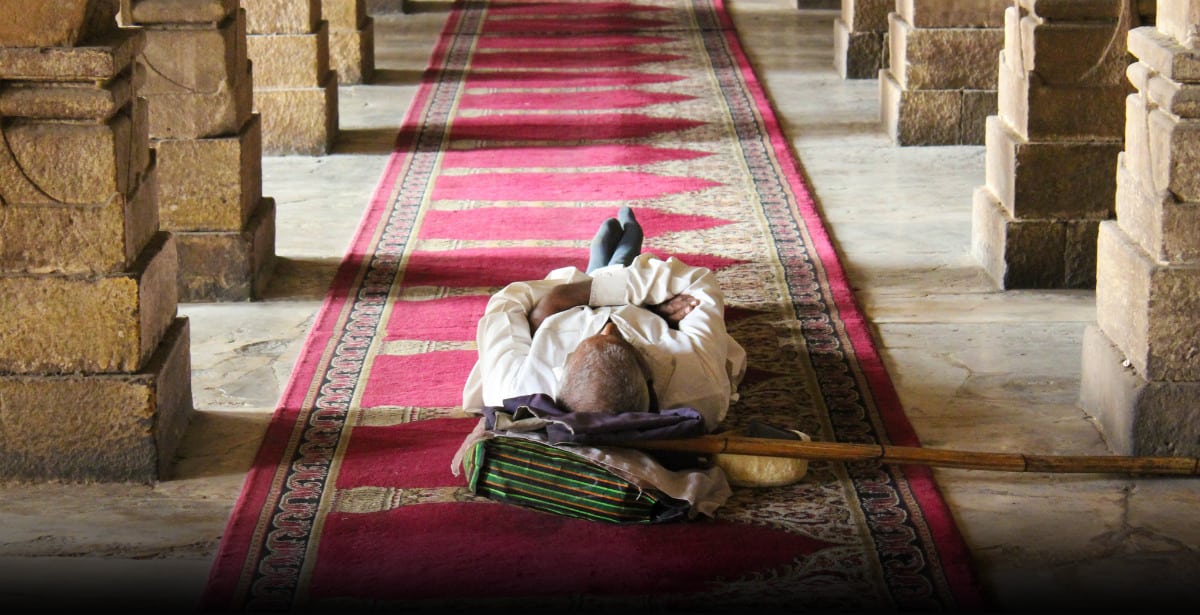 I’tikaf is intended to be a blessed time for those who have the opportunity to engage in it so why is it causing so much marital discord between couples who Jazmin Begum-Kennedy is counselling?

Iʿtikāf (Arabic: اعتكاف‎‎, also i’tikaaf or e’tikaaf) is an Islamic practice consisting of a period of staying in a mosque for a certain number of days, devoting oneself to worship during these days and staying away from worldly affairs. The literal meaning of the word suggests sticking and adhering to, or being regular in, something, this ‘something’ often including performing supererogatory (nafl) prayers, reciting the Qur’an, and reading hadith.

Every year, I read wonderful social media updates from brothers preparing to go to i’tikaf followed by others praising them and requesting them to make dua. This ought to be a beautiful thing but unfortunately for the wives left behind, it is often a nightmare.

Few men make enough fanfare or even mention who will

All this on often little to no resources.
For these women, engaging in more prayer, Qur’an reading and quiet reflection during the blessed 10 nights of Ramadhan are a remote possiblity.
Don’t get me wrong- I am all for i’tikaf but men need to make provisions for their womenfolk first before they set off. Every year I am left counselling mothers who have been left to take care of young children and demanding inlaws, as well as send freshly cooked food to their menfolk at the mosques. Often, they are not left with much money or resources to barely feed the children and elderly in their care, let alone send food to their men in i’tikaf.

“But My Wife Doesn’t Mind”

I don’t just listen to the women’s side of the story. I have spoken to many men about this. Last year, one brother messaged me saying how the companions of the Prophet Muhammad ﷺ  often left for months and years and no one complained. He insisted that his wife didn’t complain either. When I asked him if he had asked her, he did not reply.
We do not live in societies that allow for such privileges. When the companions of the Prophet ﷺ went away, they left their families in a community with extended families and friends. They had maids as well as wet nurses for support.
These days, women have to do school and mosque runs, shopping, take children to appointments, chores for in-laws etc. Everything is done by one person – the mother.
On top of the daily grind of life, there’s the added stress of arrange the delivery of fresh, pipping hot food because she doesn’t want to upset or anger her husband who has gone to get closer to Paradise.

Is This The Path To Paradise?

What blessing is there in striving for Paradise, off the back of another human being?
I acknowledge that being in service to those in worship is a form of worship itself, and may Allah reward all who engage in this to the best of their abilities. However, on the flip side, there is a disturbing element of injustice and oppression.
Just before I wrote this, I was consoling a mother who is experiencing a very difficult pregnancy and has a toddler to attend to. She can barely keep her head up due to the sickness and exhaustion. Her beloved husband set off for iti’kaf leaving her with strict instructions on making sure his two meals are delivered at the right temperature.
I try not to aggravate situations like this. I try to hold my tongue, for what it’s worth. I advised this woman to go to her parent’s home so she can get some much needed respite. She is drained. She is carrying life in her womb. It is her God-given right to be nurtured during this fragile time and her God-given right to request her husband stay home and make himself useful. I told her to print this profound hadith and hang it in her home so all can see what our beloved Prophet ﷺ had to say:

The best of you are those who are best to their wives.

SubhanAllah, it is time to reflect on why we do things and how our actions, even if it’s to do something good can be so damaging for our hereafter. I was reminded by a fellow mother, Sumayyah Omar on Muslim Mamas that the Prophet ﷺ said,

“The most beloved people to Allah are those who are most beneficial to the people. The most beloved deed to Allah is to make a Muslim happy, or to remove one of his troubles, or to forgive his debt, or to feed his hunger. That I walk with a brother regarding a need is more beloved to me than that I seclude myself in this mosque in Medina for a month. Whoever swallows his anger, then Allah will conceal his faults. Whoever suppresses his rage, even though he could fulfill his anger if he wished, then Allah will secure his heart on the Day of Resurrection. Whoever walks with his brother regarding a need until he secures it for him, then Allah the Exalted will make his footing firm across the bridge on the day when the footings are shaken.”

Scholars and Imams, Insist On A Checklist

Wouldn’t it be great if the imams in all our mosques would read this hadith out during Friday sermons in Ramadan? And then advise the men to follow basic protocols before packing their bags? Moni Akhtar, another mother from Muslim Mamas made a great suggestion: the masjid should give out a form of prerequisites before men are accepted into i’tikaf:

Guidance and prompting from the ulema is sorely needed to raise greater awareness.
I would love to leave on a good note but instead I am forced to leave a warning. Your women and those in your care may not utter a word  now but their aching bones will testify against you on the Day of Judgement. May Allah have mercy upon us all, ameen.

[cwa id=’cta’]
Jazmin Begum Kennedy (JBK) is a ‘Qualified Housewife.’ By day she is a mother, wife and teacher; by night she wages war against oppressors and writes books. She is an experienced teacher of primary and secondary education, an acclaimed professional artist (JBK Arts) and published author of Mercy Like the Raindrops, Blessed Bees, No School Today and the upcoming novel, Fifteen. Jazmin is an online counsellor specialising in domestic abuse, rape and child abuse. She also physically helps victims of domestic violence flee their abusive marriages. She is the co-founder of the Nisa Foundation, working as a women’s aid worker for victims of domestic violence. JBK currently homeschools her three children, whilst managing a network for Home Educators in the Greater Manchester area of the United Kingdom.