How remarkably small and serendipitous the world can be when we leave our affairs in Allah’s hands, writes Hina Khan-Mukhtar. 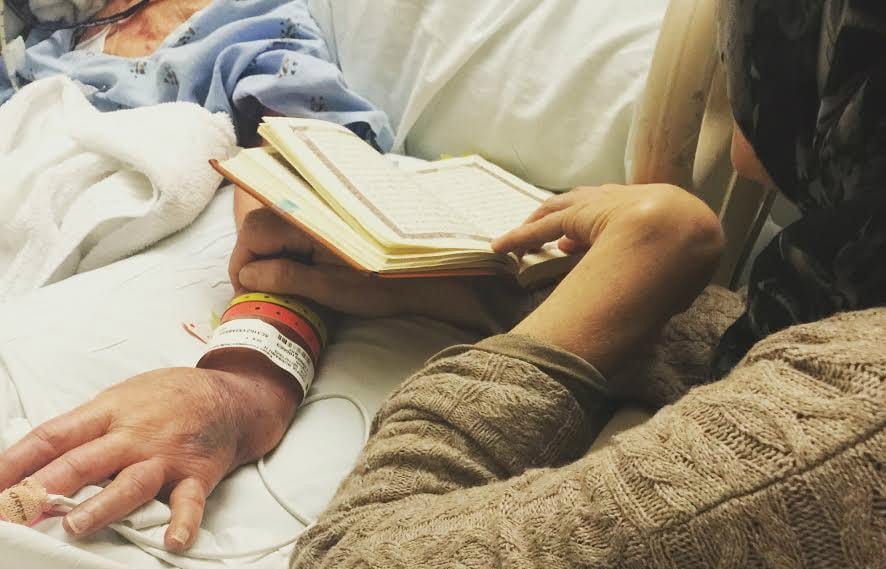 I was listening to my girlfriend recite Surah Ya Seen — the 36th chapter of the Holy Qur’an whose recitation is meant to help ease the transition of the human soul from this realm to the next — to a beloved auntie of ours in the hospital tonight when I heard Surah Fatiha (the first chapter of the Holy Qur’an) being recited in an elevated voice outside of the hospital room.
“Who’s reciting Qur’an so loudly…and in public too? And why?!” I wondered in a panic before rushing out the door to investigate.
The nurses were sitting at their station with amused looks on their faces. Surah Ya Seen in a female voice was emanating from the room behind me while Surah Fatiha in a male voice was echoing out from the room next door. The thought crossed my mind, “Oh good God! How obnoxious! We Muslims are just taking over this place!” 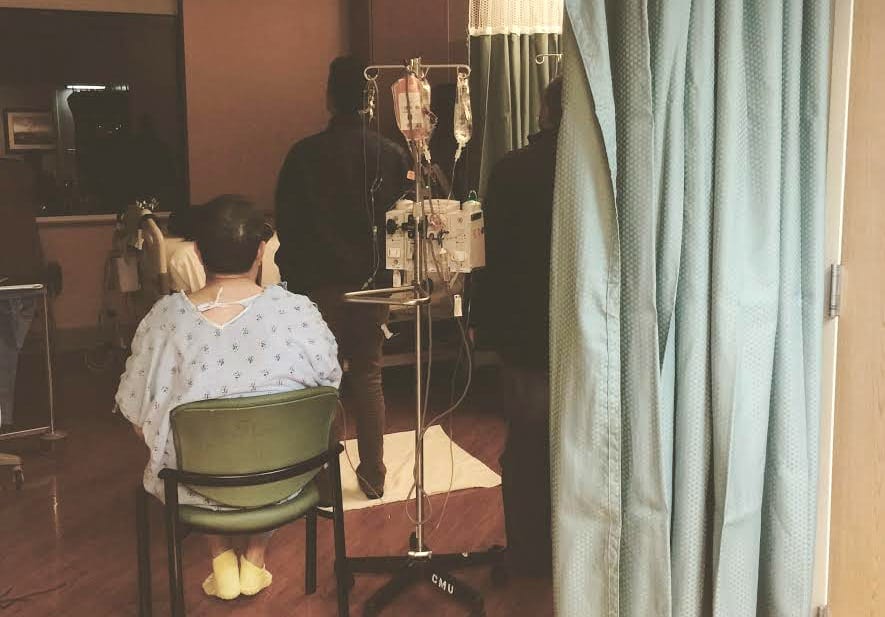 When I peeked into the room next door, I saw that it was actually my son Shaan who was reciting the Arabic verses as he led his “uncle” (an ILM Tree dad who had also been visiting our mutual auntie that evening) and a stranger (a patient wearing a hospital gown and hooked up to an IV) in prayer. I surreptitiously snapped a photograph with my phone before quietly walking away.
When my girlfriend later joined me in the hallway with the Holy Qur’an still in her hands, I told her about what was going on next door. Suddenly a tall white lady was standing next to us with a sad smile on her face.

“That’s my husband in there with your men,” she told me. “I’m not Muslim, but he is, and he was very moved when he realized they were Muslim and he asked them to say a prayer for him, so I guess that’s what they’re doing. Let me tell you, nothing has been so healing for him in this whole hospital as whatever is going on right now in that room.”

She seemed like she could use some cheering up, and we told her that we wished her husband well, a complete healing from whatever was ailing him (we didn’t ask for any details and she didn’t offer any). I asked her where she lived, and when she named her town, my girlfriend told her, “We’re neighbors! I live in Lafayette!”
The lady looked at her closely before gasping. “Were you walking around the Lafayette Reservoir 2 days ago with a baby?”
My girlfriend told her yes.
“My husband stopped you and said hello!”
My girlfriend’s eyes widened. “I remember that! I remember being so moved by your husband’s salaams! I even thought about him later after I went home!” (Afterwards, in privacy, she told me that the husband’s sincerity and warmth had touched her and left an impact on her; she could tell that his wife wasn’t Muslim and that the husband seemed to be reaching out to my hijab-wearing girlfriend and connecting with her on the simple basis that she was.)
We talked some more and realized that one of our ILM Tree graduates was actually best friends in college with this lady’s youngest daughter. We were flabbergasted by all of the random connections and how small the world suddenly seemed. “It’s so interesting that God has chosen to cross our paths here in this hospital of all places,” I told her, and she agreed.
After the prayer ended, I entered the room where I heard the Muslim man telling my son as he bent over and squeezed his shoulder, “I want your number, young man. I want you to take my number. I want you to visit me.” Shaan promised him that he would.

“Allah sent me these men”

When I interrupted to introduce myself to the man (and for my girlfriend to re-introduce herself to him), he looked at us with tears in his eyes and had a hard time talking without breaking into sobs. “I want to tell you something. Two days ago, I had a procedure done. Before the procedure, I wrote out the Surah Fatiha (opening chapter of the Holy Qur’an) on a piece of paper and held it in my hand. When I woke up, the paper was gone. I looked for it everywhere. I asked the doctors and the nurses, but no one knew where it was! I was walking outside in the hallway looking for it just now — thinking that maybe I dropped it somewhere out there by mistake — when Allah sent me these men instead. He answered my prayers by sending me these Muslim brothers to pray with me and to pray for me!”
Later, Shaan told me what had happened while my girlfriend and I had been sitting by my auntie’s bedside. He told me that he and the ILM Tree dad had been standing out in the hallway with misbahas in their hands when this man came walking by, rolling his IV on a stand and with his wife by his side. Shaan noticed that he kept staring curiously at the prayer beads in their hands. Finally, the man asked them (with the wife embarrassedly telling him to leave the two men alone), “What is that in your hand?”
The ILM Tree dad said, “They’re prayer beads.”
He responded gently, “Many religions have prayer beads.”
Our friend said, “We’re Muslim.”
The man started crying and hugging and kissing Shaan and the ILM Tree dad while his wife went “ohhhh…awww…oh!” in the background. Shaan said she was obviously touched and surprised by how moved her husband was. Finally, the man broke away and asked them through his tears, “Can I pray with you guys? Can you say Fatiha for me?”
Shaan said, “Well, it’s Isha (last prayer of the night) time. We can pray Isha together.”
The man said, “Yes, I would like to pray Isha with you! Let’s do that! Let’s pray Isha!”
He led them into the empty hospital room where Shaan and the ILM Tree dad helped steady him as he attempted to do wudu (ritual ablutions with water before prayer) at the sink. Shaan kept worrying that the man would fall over as he helped him wash his feet. “I haven’t done wudu in so long,” the man marveled to himself. “I hope I’m doing it technically right.”
When he lined up for prayer (by sitting in a chair), Shaan overheard him murmuring in a state of wonder to himself again, “I haven’t prayed Isha in awhile!”

Shaan led him in prayer, and afterwards the man got choked up again and thanked him for reciting a chapter in the prayer that had the same title as his name (Shaan had no idea that he had done that at the time). Then the man said, “I’ll tell you my story. I was living the American Dream — it was all work work work go go go. I used to tell myself that one day I would feed the orphan, one day I would help the poor, one day I would do all the things that the Qur’an tells me to do. I was about to retire and finally start doing all those things that I had thought I would do one day…then two days ago, I found out I have a brain tumor…and I realized that I should have been doing those things all along.”
It was soon after this point that my girlfriend and I entered the room to greet him. The man could not stop crying as he told us what meeting us had meant to him. Before leaving the hospital, we prayed for him and exchanged numbers and reassured him that we would be in touch, insha’Allah.
On the drive home, Shaan said, “You know, Mama, it’s interesting how Allah closes one door, but then He always opens another.”
“What do you mean?” I asked.
“Well, I was thinking about how one door is closing now that Auntie So-and-So is passing away. And I was wondering whom we would get to go visit now. But then Allah sent us this man. We can start visiting him.”
He continued, “And, you know, I was starting to become a little cynical regarding the ummah (global community of Muslims) after some of my recent interactions with some of them. But tonight cured me of all that. I love the ummah. Someone can be away from the religion for their whole lives, but in the end, everyone always comes back to Allah.”
When I got home and tried to tell my husband about our experiences that evening, I became overwhelmed and started crying. “Do you know what we witnessed today, Zeeshan?”
“What?”
“We witnessed a man calling on Allah and Allah saying, ‘Here I am.'”
Zeeshan nodded, then sighed, “And the sad part is that that actually happens all around us all the time…most of us are just too busy to notice.”

Article by Shaykh Faraz Rabbani This talk was transcribed by an internal student...
5 mins

Shaykh Faraz Rabbani This article is transcribed by an internal student based on...
2 mins

The Five Levels of Prayer

Shaykh Irshaad Sedick The Prophet (Allah bless him and give him peace) said: “...