“Work for God and not for your stomachs” – meeting the Pope 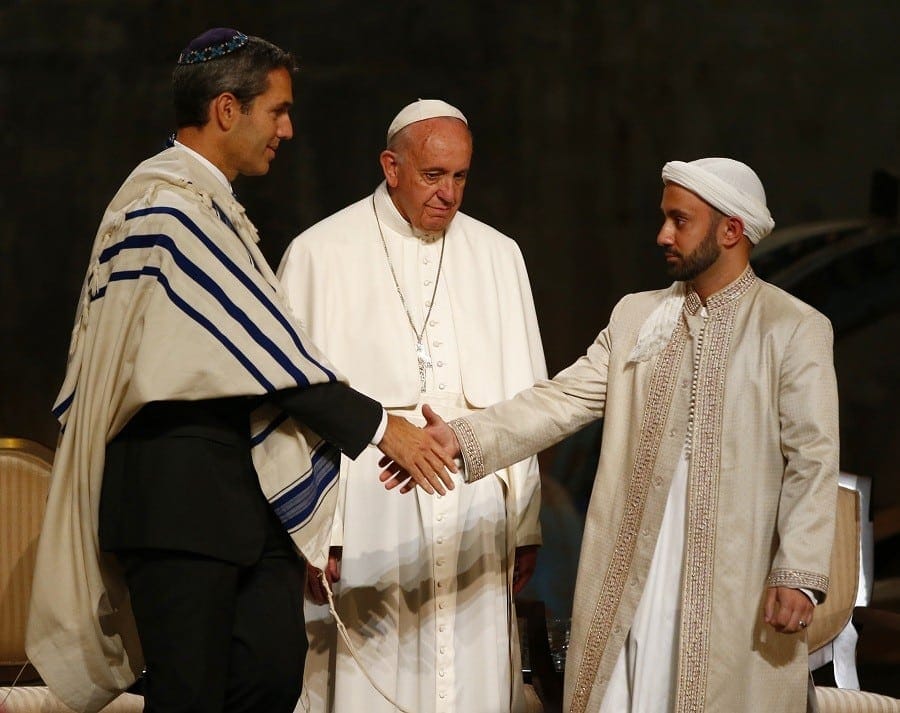 “Work for God and not for your stomachs.”

These words of Jesus, as recorded in Muslim scholarship, offer critical advice in a modern world dominated by greed and ego. By working for God, one makes the greater good their ultimate aim, leaving aside merely personal interests for those that bring wholeness, beauty and wisdom to the community at large – then, ultimately, back to oneself.

In a world dominated by a culture of ‘me, myself and I,’ that is no small task. With the tide of popular culture and the mass media moving against traditional values like selflessness and charity, Muslims hoping to embody the above wisdom need partners in their efforts to bring light into our societies. One of the critical partners for that task, according to many scholars, are those who also love the man who uttered the above words: the Catholic Church and its millions of followers.

Recent events confirm this. Imam Khalid Latif, executive director of NYU’s Islamic Center, met with Pope Francis during the pontiff’s U.S. tour in September. He came away from the meeting further convinced that the door to a deeper relationship between the Muslim and Catholic communities is not only possible but necessary.

A pope with a history of warm interactions with the Muslim community, Pope Francis touched the hearts of many when he began his evening prayer in New York’s St. Patrick’s Cathedral by going offscript and making a spontaneous supplication for the Muslims who died during the Hajj. His outreach to Muslim communities has been deeper, however, as he has also called on all of Europe’s 120,000 parishes to each take in one family of Syrian refugees – the vast majority of those refugees being Muslims.

To take the hands of people such as this is essential, said Imam Khalid, if we want to emulate the Prophetic model in creating the institutions needed to support a flourishing society.

“The underlying premise of sharia is the increase in benefit and the reduce in detriment. For me personally, I would say that that is without condition or qualification. If you have a means and ability to be of assistance and be helping others, then you want to be able to do so just because it’s the right thing to do,” said Imam Khalid, also chaplain at NYU and the NYPD.

“There are many indiviudals that need for us to be able to understand their narrative and reality so that we can either build with them or that we can build for them.”

One small example of how interfaith partnerships can have a tangible impact on society is in Imam Khalid’s work with various religious groups to take on sex trafficking and poverty. Other examples include multi-faith coalitions providing support for Syrian refugees in different parts of the world. In working with these groups, one is inspired to take take one’s own sincerity in such acts to a higher level. “When you have partners who understand where you’re coming from, it allows for there to be a different depth to your relationship,” said Imam Khalid on working with other faith groups.

“They’re not seeing it as a PR kind of thing but they actually have a deep-rooted [intention] governed by their moral compass. As an individual, to be in the presence of someone who is motivated through a set of values and principles also becomes important as a learning process.”

While many faiths and philosophies offer rich opportunities as partners for Muslims hoping to improve society, the global Catholic community is an especially important candidate for such a partnership. Shaykh Abdal-Hakim Murad, director of the Cambridge Muslim College and a lecturer at Cambridge University, has often written that as one of the few major groups who still believe in timeless moral absolutes, the Catholic community is a critical ally for Muslims trying to bring mercy and justice into a world filled with ideology and ego.

Additionally, although religiosity has fallen in much of the West, the institution of the Vatican is still highly respected in many secular Western circles, wrote Shaykh Abdal-Hakim. As such, it can play a critical role as an interface of sorts between Muslims and a Western climate threatened by increasing Muslim immigration and experiencing a steady rise of Islamophobia.

“An asset to his community”

This is a reminder that ultimately, engaging with other faith groups not only brings benefit to the society at large, but also brings benefit back to the Muslim community itself. Our history offers many such precedents, said Imam Khalid, a major one being the example of the Prophet’s companion Abu Bakr.

As Abu Bakr was preparing to leave Mecca in order to worship Allah without fear of persecution by the Quraysh, he was stopped by a Meccan man who asked where he was going. Abu Bakr explained he was leaving the city so he could practice his religion freely. The man begged him to stay, saying that he would keep Abu Bakr under his protection from then on. The reason, according to Imam Khalid, was one Muslims today must take to heart: he was an asset to his community.

“The way Abu Bakr lived his Islam, or his life and values, was in a way that the entire population felt his presence,” said Imam Khalid. “And they were then willing to stand up for him because they understood the benefit he brought to them.”

With Pope Francis’s moves of outreach towards the Muslims community now on the table, Imam Khalid said that the Muslim community should mobilize in order to make the most of this situation. Lamenting that the Muslim community did not use the 9/11 memorial service as an opportunity to publicize the American Muslim narrative nor use the Pope’s visit to cement the American Muslim community’s relationship with its Catholic peers, Imam Khalid said he hoped that noting these missed opportunities could be a catalyst that prompts better community organization around unique opportunities for interfaith engagement such as this in the future.

He also hoped that the community could work together to not merely respond to outreach from other faiths, but to also begin initiating partnerships with other religious groups.

“There [are] very distinct theolgical differences between any of the world religions,” said Imam Khalid. “But if we [understand the] foundational values we share [we can] then move forward in a way that brings benefit to people in pursuit of the pleasure of the divine.”