Rajab, the seventh month of the Muslim calendar, is the month of Allah. It is singular as it is neither preceded nor followed by another holy month. For this and many other reasons Habib Umar encourages the Umma to ask for forgiveness and strength in this blessed month. 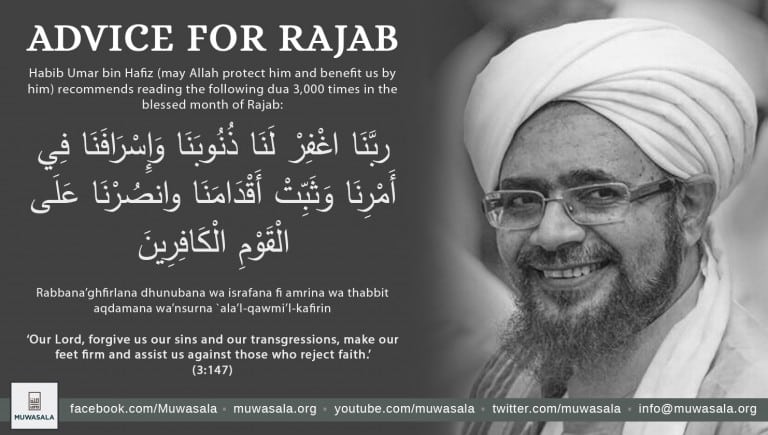 Sayyidi Habib Umar bin Hafiz, may Allah protect him and benefit us by him, said:

We would love for our brethren in faith, male and female, young and old to plead with Allah during the blessed month of Rajab by reciting the following Qur’anic prayer for forgiveness which also contains a prayer for the Muslims.

Our Lord, forgive us our sins and our transgressions, make our feet firm and assist us against those who reject faith. (3:147)

We hope that we will swiftly see the results of this prayer, as Allah mentioned in the Qur’an regarding the followers of previous Prophets:

So Allah gave them both the reward of this world and the best reward of the Hereafter: “Allah loves those who act with excellence” (3:148).

May Allah accept us all.

Some Virtues of Rajab

The virtues of Rajab are many. The Prophet, Allah bless him and give him peace, said: “Rajab is the month of Allah, Sha‘ban is my month, and Ramadan is the month of my Umma.” (Suyuti)

When Rajab entered he, Allah bless him and give him peace, would say:

O Allah bless us in Rajab and Sha‘ban and enable us to reach Ramadan. (Ahmad, Bayhaqi, Tabarani)

May Allah bless this Umma with forgiveness and strength and deliver it to Ramadan in the best of health and faith.

The Secrets of Rajab by Habib Umar and Habib Kadhim – Muwasala

The Merits of Rajab