Shaykh Faraz Rabbani gives a thematic study of this Sura, its explanation (tafsir), key lessons, and how to grow one’s relationship with Allah through deepening one’s understanding and relationship with this great Sura.

Sura al Waqi’ah is one of the most beloved and most recited Suras of the Qur’an. This is because of the sense of urgency and opportunity it conveys.

This Sura has three main themes:

The first theme, found in verses 1-56, described the amazing awe-inspiring power of the Resurrection, as well as the various stations which all people will be in.

The resurrection is a reality. It has been said, “If the light of faith were in your heart, the hereafter would be so real that you wouldn’t feel the need to travel to it.” There are two types of disbelief in the Hereafter; the explicit denial, and lesser denial. The latter involves a lifestyle that does not act as if the Hereafter exists. We should nurture a sense of reality of the hereafter, to give us the sense of urgency that we need to ensure that we take this life seriously.

Proofs of the Resurrection

The second theme, found in verses 57-80, speak about the rational proofs of the Resurrection.

Modern science usually argues that there is no Creator, However, we believe that things cannot create themselves, and we have many proofs in the Qur’an and in other places. The human being is like a plant, nurtured by reflection and watered by remembrance. If bereft of these, the faith could shrivel and die. Therefore, we have a duty to learn more about our beliefs. If a society isn’t firmly rooted in their faith, the faith can leave when in testing times.

During and After Death

The third theme, from verses 81-96, speaks about the state of a person during and after death.

After death, there are many types of people. The ones brought near, will have joy and ease in Paradise. There will also be those of the right hand, who will be greeted with good. As for the one who denied, they will be in Hellfire.

All  blessings are from Allah, even life itself. We must respond to these blessings while we still have time. However, Allah asks us why we only look at these blessings when we are close to dying, or when we see someone else die, even though Allah is closer to us than anyone else.  Closeness to Allah is not an issue of distance, but in the sense that He sustains everything, at all times.

Why Islam Is True E03: What Is a Necessary Being? 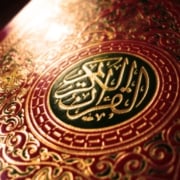 Jewels of the Qur'an, Part 2