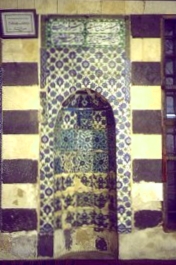 “Wa ‘alaykum as-Salam,” he answered. He stood behind the door for a moment to let me in, and let it lock behind me.

I followed him to the office and took off my shoes below the raised platform that he and his guests sat upon inside. It was spread with a carpet, pallets, and cushions for guests to lean on against the bookcases. Patches of paint hung down or were already fallen from the centuries-old vaulted celing, and the whole narrow chamber was filled with books, some on shelves nearby, others at the far end in disorderly stacks or in cardboard boxes. From his seat facing the door he could keep an eye on the court-yard and gates of the mosque. He lived most of his later life there, sitting with his right knee drawn up, reading books of Shafi’i jurisprudence, his back to a cushion on a wooden panel against the wall. The small table before him was heaped with books and pamphlets, and he had his tea things below.

This morning, as he read out the pages I had brought, he raised the point that in one’s financial dealings with other Muslims, if part of their money is illicit, the Hanafi school stipulates that more than 50 percent of their wealth must be lawful (halal) in order for it to be lawful to deal with them, while the Shafi’i school merely requires that one know that any part of their income, no matter how little, is lawful.

I thought for a moment, and said, “Then how can you take a wage from this government?” –meaning with its illicit taxes, its plundering of people’s money, its bribes and confiscations. He received a monthly salary as imam of the mosque.

He said, “It is permissible in the Shafi’i school to have dealings with someone whose income is admixed between the lawful and unlawful, since one may presume that the part one is taking is from the lawful portion of his income.”

“What portion of their income is lawful?” I wondered.

“Don’t they provide a service,” he asked, “by selling people stamps at the post office?”
I had to admit that they did.
What he did not tell me, and it was only after his death I found out, was that he gave away his entire salary each month in charity, and only ate and supported his family from his own trade in books. Though he could have easily vindicated himself by mentioning this in the lesson, he preferred to hide it, because it was his way to keep such things between himself and Allah.

When he came to Damascus in 1950, he sold coffee, and printed and sold limited editions of books in traditional Islam for those who wanted them, especially works of Sufism, which he made available to Sheikh al-Hashimi’s disciples when the sheikh was teaching from them in his mudhakara or lessons. He attended the lessons of a great many ulema in this period, sometimes to the neglect of his small shop, and was finally appointed imam of the Darwishiyya, and married and settled in Damascus for the rest of his life. He lived simply, dressed well but not sumptuously, trimmed his own hair, ate sparingly of plain fare, and never changed from this, even after his sons grew up and found good jobs abroad. He disdained the government, and fell silent when ulema were mentioned who had connections with it. On an early visit to Damascus all my money had been stolen in a street restaurant, and finding myself at wit’s end, I came to his office where he was sitting with his friends, and I told him what had happened.

He sympathized with me verbally, but offered little other help. The time passed, and I was wondering what would become of me, and I finally got up to leave. The sheikh followed me out the door of the office, beyond sight of his friends, and gave me a sum of money to get back to Jordan. He had merely wanted them not to know.

A man came in one morning and told him of a dream he had purportedly had, saying, “The Prophet (Allah bless him and give him peace) gives you greetings of peace, Sheikh ‘Abd al-Wakil.”

“You’re a liar,” said the sheikh. I later thought that perhaps the man had been leading up to ask him something. After he had gone, I asked, “How did you know he was lying?”

“I know how I am,” he said, meaning not someone who deserved such a greeting. He reminded me of words of the Sufi Ibn Munazil “Whoever lifts away the shade from himself in his own eyes, men thrive in the shade of.”

He was a very private man. More than fifteen years passed after he left this world before I learned that he had been of Al al-Bayt, of noble descent from the Prophet (Allah bless him and give him peace). He had never seen the need to mention it. Nor for that matter can I remember either of us asking the other about family or kin.

I asked him for example about the hadith that “the Prophet (Allah bless him and give him peace) used to sleep half the night, rise and pray for a third of it, then sleep a sixth of it” (Bukhari [17], 2.63: 1131), and he said, “The period termed ‘night’ here begins whenever one goes to sleep, and ends at dawn.” It was rare to find such details with others. When I asked him about a verse of poetry I had heard from him “Whoever finds no teacher, let him travel,” he said, “Travelling for knowledge is obligatory when one can’t find instruction in something that is obligatory, and recommended when one can’t find instruction in something that is recommended.”

When I asked one day about the benefits of visiting graves, a practice deplored by Wahhabi “reformers,” he said: “There are seven benefits to it. First, it is sunna to do so [as the Prophet (Allah bless him and give him peace) said, “I had forbidden you to visit graves, but now go visit them” (Muslim [74], 2.672: 977. S]. Second, sober reflection on death (i’tibar) softens the visitor’s heart: how many a stony-hearted person was altered by visiting the dead and realizing that he too would someday die. Third, realizing that the deceased is alone in his grave without family or friends, with only his works, waiting for Judgement Day, makes the heart less attached to worldly things. Fourth, the dead hear their visitors and like to be visited. Fifth, if one recites something of the Koran and donates the reward of it to the deceased, [all four Sunni schools of fiqh concur that] it benefits him. Sixth, the visitor too has the reward for reciting the Koran. Seventh, the light of the deceased is reflected in the hearts of those whom Allah benefits with it.”

Sheikh ‘Abd al-Wakil came to mind when in after years I visited Aden, and a scholar got up after a meal and spoke about the conduct of the shari’a scholar (adab al-faqih). He mentioned four things: ‘izzat al-nafs or self-respect, meaning a certain personal level of manliness and chivalry; da’wat al-majlis or waiting until one has been invited to teach rather than imposing oneself on others; niyya or having the proper ‘intention’ of teaching for Allah; and talaqqi or having first been ‘directly imparted’ the knowledge one teaches from a living teacher, not only so the knowledge may be correctly understood but so the hal or state of the teacher may affect one. I have since seen a number of enterprising students who first took their knowledge from books perhaps admixed with some lessons with scholars, but no long apprenticeship in the crafts of the faqih, and who then began to teach others. They were looked up to for their wide readings, but because of little learning by talaqqi, they lacked the hal of the faqih, and were often haunted by prior character traits such as anger, pride, and envy, which are unaffected by reading. Those who took knowledge from such students were misled into believing these normal; and many acquired obsessive doubts (waswasa) about their own religious practice, not realizing this had to do with the state of their teachers.

About the Author: NUH HA MIM KELLER was born in the northwestern United States in 1954. He read philosophy and classical Arabic at the University of Chicago and UCLA, and became a Muslim in Cairo in 1977. He was a disciple in the Shadhili order of the Sufi master and poet Sheikh ‘Abd al-Rahman al-Shaghouri of Damascus from 1982 until the latter’s death in 2004, and was authorized as a sheikh in the order by Sheikh ‘Abd al-Rahman in 1996. He has studied Shafi‘i and Hanafi jurisprudence, hadith, and other subjects with traditional scholars in the Middle East, and in the 1980s, under the tutelage of Islamic scholars in Syria and Jordan, produced Reliance of the Traveller, the first translation of a standard Islamic legal reference in a European language to be certified by al-Azhar, the Muslim world’s oldest institution of higher learning. Among his other works and translations are Becoming Muslim, Sufism in Islam, al-Maqasid: Imam Nawawi’s Manual of Islam, Invocations of the Shadhili Order, Port in a Storm: A Fiqh Solution to the Qibla of North America, and an illuminated calligraphic edition of Dala‘il al-Khayrat. He has travelled and lectured on Islam extensively, and he writes and teaches in Amman, where he has lived since 1980.