Fathers and Mothers: what do you want for your sons and daughters? Ibrahim J. Long gets to the heart of the matter.

What fills your heart with joy at the thought of your son or your daughter doing, or being, or becoming? What fills your heart with hope, pride, and love for the bounty that Allah has given you and I in our children? Do you smile at the thought of them becoming a doctor, or a professional of some kind? Perhaps you imagine your daughter or son memorizing the Glorious Qur’an, or having an immense love for God and His Messenger (peace be upon him). Or, perhaps you simply hope for your son or daughter to be a person of good character.
Whatever it is that you are picturing them doing, whatever it is that generates that pride and hope in your heart; likely, you are also picturing them happy while doing it.

This desire for our children’s happiness comes from our love and compassion for them. Consider, for example, when Ibrahim (peace be upon him) was given the glad tidings that he would be made an Imam and an example of righteousness for all people he asked: “and what of my descendants?” (Q2:124)
Ibrahim (peace be upon him) had so much compassion for his children, grand-children, great-grandchildren and all his descendants that as soon as he heard the good news of being made an example for humanity, he asked if they too would have a share in that closeness that he had with Allah. He wanted all of his descendants to experience such serenity and happiness. 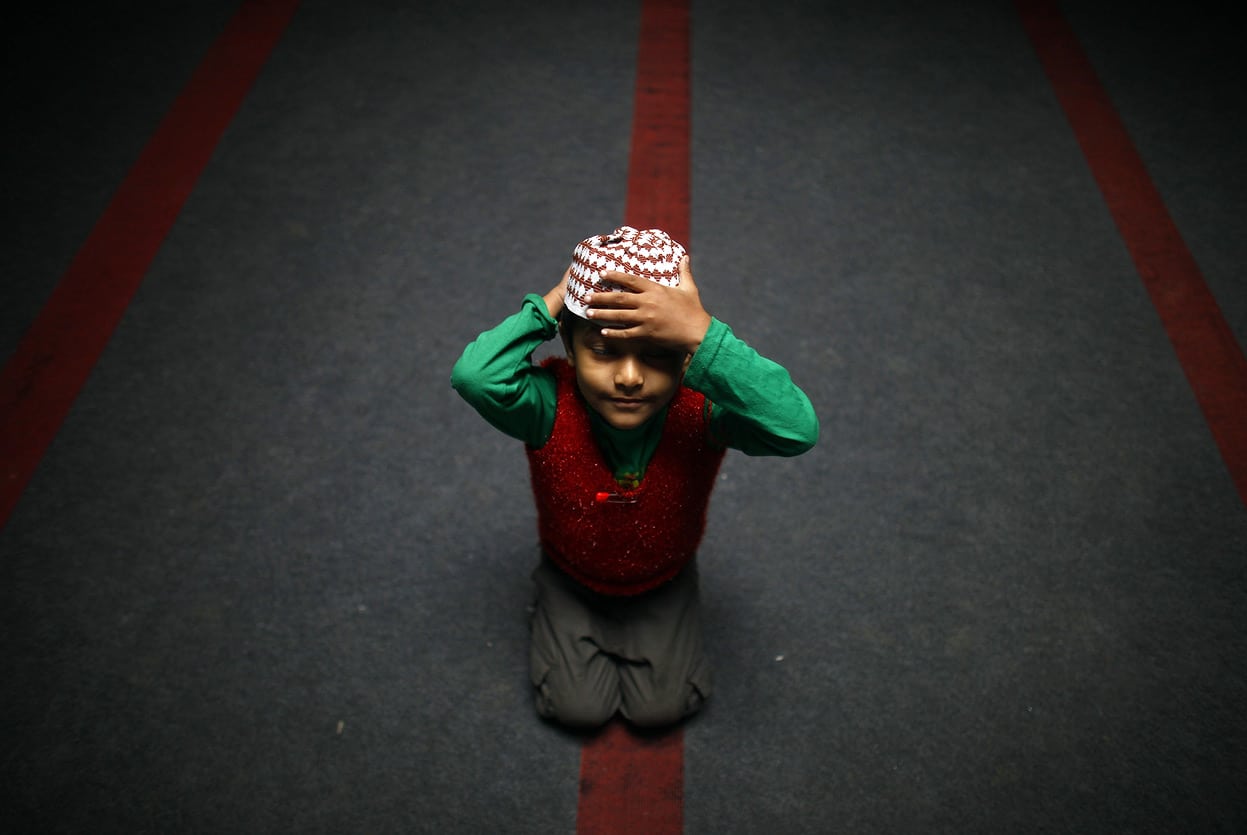 Parental concern for our children is part of being a healthy parent. In fact, it’s part of being a healthy person. Our Beloved Prophet (peace be upon him) demonstrated this concern with his children and all children he encountered.
About this, the famous servant of the Messenger, Anas ibn Malik (May God be well-pleased with him), said, “I never saw anyone who was more compassionate towards children than the Messenger of God (peace be upon him).” To which he also added that while the Prophet’s son, Ibrahim, was in the care of his wet-nurse who lived in the hills outside of Madinah, he would go there just to pick up his son and kiss him, then he would return to his business in Madinah. [Muslim]

Just For A Hug And A Kiss

Today, that would be like a father driving home from work during his lunch break just to hold his son or daughter and kiss them. To myself and all of my fellow brothers, fathers, and husbands, I advise you: If there was forgotten Sunnah that you and I would like to help revive, then let us consider reviving this one.

Not Just About Joining The Workforce

As a community, Muslims in North America are among the most educated and professional Muslims in the world. Part of our success in this is the great efforts that parents have put into their son and their daughter’s education, masha’Allah. But, a good profession alone will not make our children happy in this life. They will also need our help in developing their faith, and they also require our guiding them to become good husbands and good wives (and later on good parents just like you and I are trying our best to be).
Parents, we cannot deny that being a husband or wife and being a father and mother are life-changing experiences and amazing responsibilities. As the Beloved Prophet (peace be upon him) has said, “Each of you is a shepherd and each of you is responsible for his flock.” [Bukhari & Muslim] And, as Allah has commanded us in the Glorious Qur’an: “Believers, Shield yourselves and your families from a Fire whose fuel is people and stones…” (Q66:6)

So, fellow fathers and mothers, how are you and I preparing our children to become shepherds of their own flocks? Are we preparing our children to shield their own families?
You and I may be raising our children with hopes of their becoming doctors, lawyers, and great contributors to the Ummah. But, are we raising them to become good husbands and good wives to their spouses? Or, good fathers and good mothers to their children?  You may very well be. And, if so, this is just a reminder for you. And, may Allah reward you.
Our Beloved Prophet (peace be upon him) has informed us that marriage is half of our deen. So, it is half of our children’s deen as well. For those of you who are married, you know it is a struggle. Every marriage has its high points and low points; even the best of them. Moreover, every parent wants his or her son or daughter to marry a good spouse who will treat him or her with respect and dignity. But my question to myself and all of you is how are we preparing our children to be good to their spouses?

More Committed To Daughters Than Sons

To be honest, we as a community (and by this I mean Muslims in general) are better committed to raising our daughters than we are our sons. To a degree, many believe that boys will raise themselves. But, our young men also need direction. An increasing number of marriageable women are complaining: “Where are the Muslim men ready to be good husbands and fathers?” And, “Where are the Muslim men who understand the responsibility of taking care of a household, who can demonstrate self-control and can control himself when he is angry?”

Undeniably, we raise our daughters differently from our sons. Perhaps we lack the wisdom and strength to raise our sons the way we raise our daughters. But, what we are left with are various young males who do not yet know how to behave like mature men. Although in the short-term, greater freedom for our young men and boys may feel like we are giving them a “chance to be on their own.” However, sometimes the freedom we as a community grant our young men is experienced by them as a lack of direction, a lack of mentorship, and a lack of support.
Fathers and Mothers, it is not only unfair to our young women that we expect more from them. But, it is also unfair to our boys and young men who need us to expect more from them. Our sons also need the support of our guidance. Our sons also need us to teach them how to control themselves. Our sons also need us to remind them that they too may one day have a family of their own and that being male does not mean one is ready to be a man. So, let us help them and encourage them to be the best men, the best husbands, and the best fathers that they can be.

I can remember one time attending an Islamic lecture. I was sitting next to a father and his son. Shortly after the father sat down with his son to listen to the lecture, the young boy complained to his father, “Dad, Dad… let’s go! I’m bored.” To which the father very gently said, “Just wait a few minutes. I would like to hear what the shaykh has to say.” However, shortly thereafter the young boy complained again, “Dad… I’m bored..let’s go!” And so the father left with his son.
Now, I don’t know the full story. The father could have left with the son and later advised him regarding his behavior. Or, perhaps there was something else that I did not know about this situation. I am not speaking against this father, or his son. However, this incident made me realize something  that I had not before. In the past, I would have felt bad for the father for having an impatient and  disrespectful son. However, in this instance I realized that I felt worse for the son who was struggling with his nafs and did not yet know how to be patient. Patience had not yet been taught to him.

Helping Children With Their Nafs

As adults we have more experience with the inner battlefield of our nafs; battling our own desires and learning how to control ourselves. From age and experience we have become more familiar with the consequences that can come about if we don’t control ourselves. But, this man’s son was young. He did not know any better and he needed someone to advise him and to guide him. Perhaps this father did just that after he left. I don’t know. But, what if a son just like this one never received any help? Who then will teach this young man and young men like him the important lesson of patience? Who will teach him to think of the needs of others? Who will teach him and others like him to set aside one’s own desires if it would bring happiness to another? If no one helps him, then what sort of husband would this young boy grow up to be?
Now, let me be open and honest with you: it is not, and will not be easy to parent our youth. Moreover, this reminder has been directed at myself first and foremost and then to all of you. There are those of you are more experienced and better at parenting than I am. There are also many of you who have also been better sons to their parents than I have been. This discussion may erupt in denial, or anger in the hearts of parents who feel like they are being judged by others when they are trying their very best. This is not a call to judge others. This is only a reminder for each of us to bear in mind for ourselves what we are doing to raise our sons. When this reminder is forgotten it leads to the needs of the young men in our community being forgotten as well.
As one shaykh once said, “Our communities often focus on raising our daughters. Our daughters are doing fine. What we need to focus on is raising upright young men for them to marry and to lovingly care for them.”
Let us remember, that we are shepherds and shepherds must engage with, be patient with, and guide his or her flock. May Allah make it easy for us and bless us in our efforts. And may Allah make all of our children among the mutaqqina imaman (the foremost in faith).

“Our Lord, grant us from among our spouses and offspring comfort to our eyes and make us an example for the righteous.” (Q 25:74)
May Allah bless all of you and our children. Ameen.
Ibrahim J. Long is a Muslim chaplain and educator. You can follow his blog at ibrahimlong.org

Resources on Shepherding Our Sons and Daughters