A Great Female Servant of God by Ustadh Amjad Tarsin Ustadh Amjad Tarsin reflects on the apparent contradiction some minds see in the idea that there are female saints in Islam. He frames this within a tale of a personal journey to visit Hubaba Safiyya al Attas in Hadramawt in 2006.

While taking a class on Islamic Spirituality at the Hartford Seminary one of my Christian classmates gave a presentation on the famous lover of God, Rabiʿa al-ʿAdawiyya. Before starting the presentation she sincerely asked the question: “Does it seem contradictory in Islam to have a female saint?” I was shocked at the question and immediately shook my head, seeing no contradiction at all.

I looked around at my fellow Muslim men and women in the class and saw some hesitation on their faces. Were they perhaps thinking that there was some sort of contradiction? I don’t know for sure what was running through their minds, but it is because of my classmate’s question that I feel the need to write about my extraordinary visit to a waliya — a female saint.

On September 16th, 2006 (Shaʿban 1427 H.), in Wadi ʿAmd in Hadramawt a group of friends and I drove for a few hours to visit a special servant of God: al-Hubaba Safīyya al-ʿAttas, may God have mercy on her. We desired to seek her out because her great station with God and of her endless devotion to and love of Him, Blessed and Exalted is He, was legendary.

The story I was told was that she was discovered by a scholar of Ḥaḍramawt who had seen the Prophet Muhammad, Allah bless him and give him peace, in a dream. It is said that the Prophet informed the scholar of Hubaba Safiyya and after telling the scholar where she lived, the Prophet commanded him to seek her out. Shortly thereafter, her name became well-known throughout the region, and even the most well-respected scholars sought her out to ask her for dua.

It never really occurred to me before going to Hadramawt that there existed righteous women worth seeking out, but I learned early on that even though I was living in a very conservative society, the people there nonetheless had great respect and reverence towards women of piety and knowledge. Even though I had heard great things about Hubaba Safiyya, I still didn’t really know what to expect.

After driving several hours through the Hadramawt Valley, we finally reached the small village where Hubaba Safiyya lived. We arrived unannounced, and several children, who I later discovered were Hubaba Safiyya’s grandchildren (or maybe even great grandchildren, for she was over 100 years old at the time), surrounded us, immediately recognizing us as outsiders. The children ran off to tell the elders of our arrival, and it was immediately known that more people had come to seek the baraka of Hubaba Safiyya.

We were greeted warmly by a man in his early fifties who guided us to the Ḥubāba’s house. As we walked up the hill, the excitement and anticipation in my heart began to overflow. I felt something considerable was imminent. We finally made it to the old clay house and we awaited permission to see Hubaba Safiyya. We were graciously given sweet tea while we waited. Soon thereafter, permission was granted.

As we walked towards her room, I felt a strong spiritual presence overcome me. As we entered her room, ducking our heads to enter through the door (which was quite low by Western standards), my eyes fell upon one of the most astounding human beings I had ever seen. Hubaba Safiyya was at such a late stage in her life that she could not get up from her bed. But although she rested there weak in body — her spiritual qualities dwarfed all those present.

She was completely immersed in the remembrance of her Lord. I felt from her words and demeanor that it was as if she was standing in the Rawda of the Prophet’s Mosque, peace and mercy be upon him. We all lowered our heads in front of this spiritual giant and were thankful for being able to see one of God’s righteous servants. Being in her presence made us all more mindful of our Lord and increased our yearning to seek His good pleasure and Noble Countenance.

What stood out the most to me were her eyes (a rare grayish-green color). When she looked at me through her face-veil, I felt her gaze pierce my soul. She had ancient eyes that looked like they had seen more than my imagination could muster. Her eyes were filled with wisdom, knowledge, mercy, and love. I felt something within me change forever after she looked at me.

You Have Attained Your Goal

After we left Hubaba Safiyya’s house, we all felt changed. Her prayers and her presence gave us more than words can describe. We felt an overwhelming sense of power and mercy. Although since then I have visited many righteous men, there was something absolutely unique about Hubaba Safiyya.

I was fortunate enough to visit her two more times before leaving Hadramawt, and will remember her for the rest of my life. I thank God for being able to spend time with a human being like her, and I pray to be united with her in the next life in the company of the Mothers of the Believers, Lady Asiya, Lady Maryam, Lady Khadija, and Lady Fatima – may God’s peace be upon them all.

Al-Hubaba Safiyya passed away in late 2007/1428. Scholars from all across the Hadramawt Valley flocked to her funeral, honoring one of God’s beloved saints. May God be well pleased with her and shower her with His infinite mercy.

Source: The Fragrance of Fatima

The Masters and the Millennials | Introduction – Shaykh Abdurragmaan ... 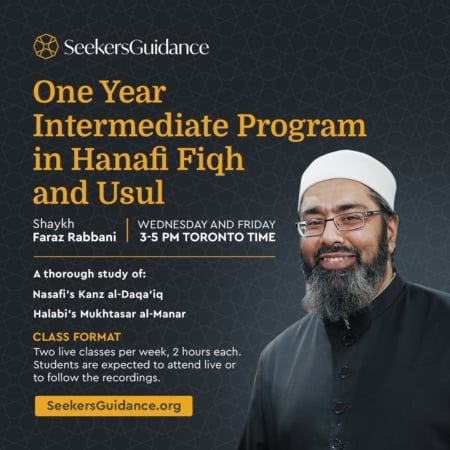 One Year Intermediate Program in Hanafi Fiqh and Usul

The Masters and the Millennials | Part 2: Knowledge – Shaykh Abdurrag...