The Revival of the Religious Sciences – Studying the Ihya

Shaykh Faraz Rabbani is covering two books in the Ihya in his weekly live classes from SeekersGuidance Toronto:

Book 2: The Principles of Islamic Belief

These classes will deepen the understanding of key subject-areas for concerned seekers, from one of the greatest, most blessed, and most insightful works of the Islamic tradition and develop seekers’ understanding of Arabic, as the text will be read in Arabic, translated, and some key Arabic vocabulary and usage will be explained.
Click here to register

About Ihya ulum al-din
http://mishkatmedia.com/travellinglight/about.html
Imam al-Ghazali’s masterwork The Revival of the Religious Sciences (Ihya ‘ulum al-din) is an unrivalled sourcebook of Muslim spiritual wisdom. Practical rather than abstract, the compelling force of this text has changed millions of lives – and continues to do so today.

Shaykh Abdal Hakim Murad explains in the introduction to The Remembrance of Death and the Afterlife: Book XL of The Revival of the Religious Sciences, ed. by T. J. Winter, Islamic Texts Society 1995: 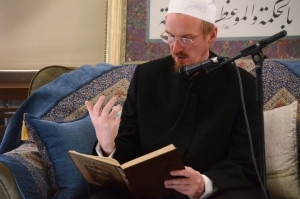 Imam al-Ghazali (d.1111), known as the ‘Proof of Islam’, authored over a hundred books on all the Islamic scholarly disciplines.

Famed as a jurist, theologian and teacher at the Nizamiyya madrasa in Baghdad, he mastered the swirling intellectual currents of his day to articulate the importance and harmony of Islamic orthodoxy with compelling and renewed clarity.

This is most clear in the work for which he is most celebrated, The Revival of the Religious Sciences (Ihya ‘Ulum al-Din), a compendium of spiritual guidance which he wrote to revive the flagging fortunes of the Islamic world in his age.

Covering every aspect of the religion, from belief, to worship, to daily life, to vice, virtue, and the final encounter with God, this text is regarded as one of the masterpieces of world sacred literature.

The reason that the scholars and others paid so much attention to Ihya’ `Ulum id Din, ‘The Revival of the Religious Sciences’ by Imam Ghazali is because he (may Allah have mercy on him and be well pleased with him) explained the realities of Islam in the most stunning way and with the most subtle of discourse.

Imam Ghazali also explained the diseases of hearts that destroy one on the Day of Judgment and explained the ways the shaytan enters upon one and how one may cure this.

Lessons from the Life of Imam al-Ghazali – Shaykh Faraz Rabbani