The message of Islam is that pursuit of money for its own sake is unnatural, inhumane, and will lead us to catastrophe, argues Shaykh Abdal Hakim Murad.

O you who believe! Let not your wealth nor your children distract you from remembrance of Allah. Those who do so, they are the losers. (63:9)

This verse in the Qur’an is an invitation for humanity to make a relatively small effort in this world, in return for the eternal reward of the hereafter. It is a call to save ourselves from becoming fixated on our wealth and on providing our children with the latest gadget and games, which ultimately are mere distractions from our remembrance of the creator.

But humans are short-termist; we think primarily of our pleasures now rather than the harmony and serenity of the world to come. Chapter 102 of the Qur’an says that we are distracted by competing in worldly increase, until we finally end up in our graves where we will be questioned about our excesses.

Does this mean that it is wrong to own things? Of course not, as money and offspring can be positive things in the life of a believer, and we do of course have basic needs which need to be met. But we must remember that the pleasures of consumption are quickly gone, while lasting benefit comes only from using our wealth to uphold the rights of others; namely the orphan, the traveller, and the needy. Wealth is thus truly ours only once it has been given away.

Those who are genuinely distracted by worldly increase, and who make it an end in and of itself rather than as a means towards something better are in effect guilty of a form of idolatry. Ours is an age that has made idols of the great banks and finance houses, driven to frenzy by competition amongst billionaires who are kept awake at night by the thought that a rival might make a business deal more quickly than them. A banker who can asset strip companies and throw its employees out onto the street is someone who is in the grip of an obsession that has thrown him beyond of the normal frontiers of humanity. 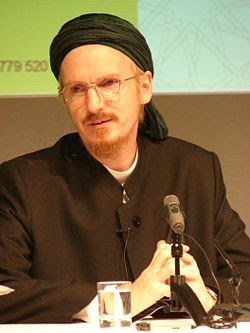 Neo-classical economics has traditionally focused on four things: land, labour, capital and money, the first three of which are finite, while the fourth, money, is theoretically infinite, and is therefore where human greed has been particularly focussed. Thus arose a system where someone could, with approval, set up a bank with only £1, and then lend £100 using property and other assets promised by others as security.

The lender now has £100 including interest, which they earned by just sitting there and doing nothing. On the basis of this £100, they can then lend £1000, and on and on, until the cancerous growth lubricated by greed becomes so huge that it leads to a fundamental breakdown in the system. Such a system based on usury, with interest as the bizarre “price of money” which itself becomes a commodity, was once prohibited by all faiths. People had a simple and natural intuition that the commoditisation of a measurement of value would open the door to trading in unreal assets, and ultimately to a model of finance that would destroy natural restraints and even, potentially, the planet.

In the classical Islamic system, by contrast, money is the substance of either gold or silver. With a tangible and finite asset being the only measure of value, there is a great deal more certainty about the value of assets and the price of money. This basic wisdom was though not just a theoretical ideal; it succeeded. Muslim society at its height was mercantile, and it was successful. Never was money assigned its own value and never was it seen as an end in and of itself.

Since the abolition of the gold standard however, theoretical limits on the price of money were removed. Last year’s meltdown, whose final consequences were unguessable, was a sign of the inbuilt dangers of a usurious world. Humans are naturally short-termist but in times of crisis we must take stock. As with the related environmental crisis, now is the time to be smarter and more self-restrained. The believer is in any case allergic to the mad amassing of wealth, since he or she expects true happiness and peace only in the remembering of God and in the next world.

Now is the time to think seriously about finding an economic system to replace the one whose dangers have just been revealed. Upon the conquest of Mecca, a verse of the Qur’an was revealed commanding people to give up what remained of their interest-based transactions, upon which a new system based on the value of gold and silver was initiated.

Those who relied so heavily on the old system would of course have been unable to understand a system without banking charges, but not only was such a system created but a successful civilisation was created using these ideas.

Last year we peered into the abyss; now we must apply self-restraint and wisdom, before complete catastrophe ensues.