The New York Times recently featured an article on Habib ‘Umar, his school Dar al-Mustafa, and Tarim itself. Shaykh Yahya Rhodus (bio) , who teaches the “Faith in Divine Unity & Trust in Divine Providence “ course here at SeekersGuidance,  was interviewed in it as well.

Crossroads of Islam, Past and Present

By ROBERT F. WORTH

TARIM, Yemen — This remote desert valley, with its towering bluffs and ancient mud-brick houses, is probably best known to outsiders as the birthplace of Osama b  in Laden’s father. Most accounts about Yemen in the Western news media refer ominously to it as “the ancestral homeland” of the leader of Al Qaeda, as though his murderous ideology had somehow been shaped here.

But in fact, Tarim and its environs are a historic center of Sufism, a mystical strand within Islam. The local religious school, Dar al-Mustafa, is a multicultural place full of students from Indonesia and California who stroll around its tiny campus wearing white skullcaps and colorful shawls.

“The reality is that Osama bin Laden has never been to Yemen,” said Habib Omar, the revered director of Dar al-Mustafa, as he sat on the floor in his home eating dinner with a group of students. “His thinking has nothing to do with this place.”

Lately, Al Qaeda has found a new sanctuary here and carried out a number of attacks. But the group’s inspiration, Mr. Omar said, did not originate here. Most of t 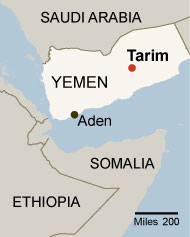 he group’s adherents have lived in Saudi Arabia — as has Mr. bin Laden — and it was there, or in Afghanistan or Pakistan, that they adopted a jihadist mind-set.

Mr. Omar set out 16 years ago to restore the ancient religious heritage of Tarim. It is an extraordinary legacy for an arid, windswept town in the far southeast corner of the Arabian Peninsula.

About 800 years ago, traders from Tarim and other parts of Hadramawt, as the broader area is known, began traveling down the coast to the Arabian Sea and onward in rickety boats to Indonesia, Malaysia and India. They thrived, and they brought their religion with them. Nine especially devout men, all with roots in Tarim, are now remembered as “the nine saints,” Mr. Omar said, because of their success in spreading Islam across Asia.

“This town, with its thousand-year tradition, was the main catalyst for as many as 40 percent of the world’s Muslims’ becoming Muslim,” said John Rhodus, a 32-year-old Arizonan who has studied at Dar al-Mustafa off and on since 2000. Tarim’s Sufist tradition also appears to have helped shape the relatively moderate Islam practiced in much of South Asia.

Hadrami merchants remained an extraordinarily intrepid and successful network until well into the 20th century. Some made their fortune in Saudi Arabia — including Muhammad bin Laden, Osama’s father, who became a construction magnate — and remained there. Others returned home and built flamboyant palaces as monuments to their success. Dozens of palaces remain, in a variety of styles — Mogul, modernist, British colonial — that contrast oddly with Tarim’s traditional mud-brick homes and mosques.

Most of the merchants fled after a Communist junta seized power after the British withdrawal from south Yemen in 1967. Now their palaces are abandoned and decayed, too grand even for the state to maintain in this desperately poor country.

The Communist years, which lasted until North and South Yemen unified in 1990, were even worse for those who refused to accept the new government’s enforced secularism.

“Some religious scholars were tortured, others murdered,” Mr. Omar said. “Some were tied to the backs of cars and driven through the streets until they were dead.” Mr. Omar’s father, who had been a renowned religious teacher in Tarim, was kidnapped and killed.

In 1993, Mr. Omar began teaching Sufi-inspired religious classes in his home. Three years later, he moved into a two-story white school building, with a mosque attached. There are now about 700 students, at least half of them South Asians, with a rising number of Americans and Britons.

Most of the students are between 18, the minimum age, and 25. They usually spend four years studying here before returning to their homes. Mr. Omar encourages them to pursue careers and spread their beliefs quietly rather than becoming religious scholars.

But even as the school grew, a more militant Islam was gaining followers across the region. Saudi Arabia, on Yemen’s northern border, was financing ultraconservative religious schools and scholars in an effort to shore up its influence here. In 1991 the Saudi king, angered by Yemen’s public support for Saddam Hussein, abruptly sent home a million Yemeni laborers, many of whom had lived in Saudi Arabia for decades and had been shaped by it.

The Yemeni president, Ali Abdullah Saleh, accommodated the Saudis and welcomed many Arab jihadists who had fought in Afghanistan. Later, he enlisted the jihadists to fight his political enemies at home, incurring a political debt that has complicated his efforts to fight Al Qaeda.

Some of the former fighters resettled in Hadramawt. Two years ago, one of Al Qaeda’s top regional commanders was killed, along with two lieutenants, in a fierce gun battle with the Yemeni military just a few blocks from Dar al-Mustafa.

And in March a suicide bomber wearing an explosive belt killed four Korean tourists and their Yemeni guide in the nearby city of Shibam. Al Qaeda’s Arabian branch claimed responsibility. The small trickle of adventure tourism that had remained in Hadramawt (it may not help that the name means “death came” in Arabic) slowed to almost nothing.

Several students at Dar al-Mustafa said there was concern about possible conflict with hard-line Islamists in Hadramawt, though the school itself has not been attacked or threatened. 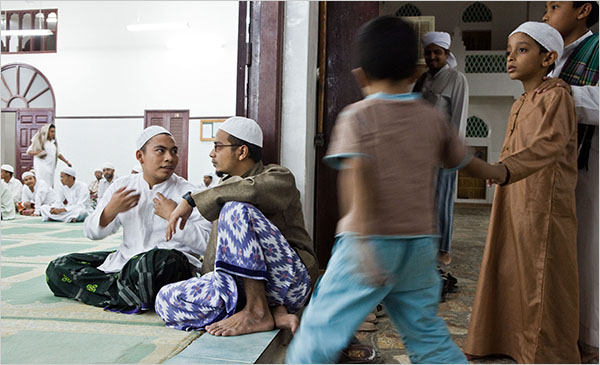 On a tour of Tarim, one of the school’s teachers, Abdullah Ali, pointed to the house where the Qaeda leaders had been killed. They had been there for some time, he said, escaping scrutiny by disguising themselves as women under thick black gowns. A trove of explosives and weapons was found in the house.

“We are mulaataf,” Mr. Ali said, using an Arabic term that describes a divine rescue from danger.

Mr. Omar acknowledged, somewhat reluctantly, that his own, milder approach to Islam had enemies in Hadramawt.

“There are differences,” he said. “But we find the appropriate way to deal with these people is to remind them of Islamic principles, not to speak ill of them.”