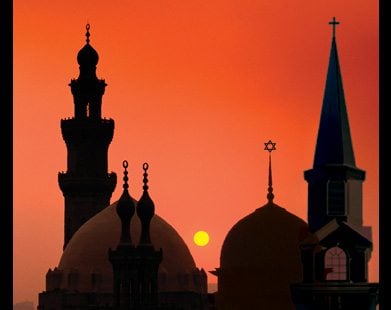 Faith & Reason: Emotion is not Enough

“When those bombs exploded in London, I felt my faith itself rocked,” confessed a friend of mine. Many people find their beliefs shaken by the flow of events, in their own lives or in society. Why? It would appear that most people’s religious commitment is based largely upon emotion— rather than knowledge, understanding, or spiritual realization. The danger with emotions is that they are fickle. The “heart” is termed qalb in Arabic because it is given to taqallub— “turning over completely”. Thus, a heart only emotionally attached to religion can suddenly find itself swept away by worldly concerns, or shaken and left without religious inspiration.

The Prophet Muhammad (May God him and give him peace) said that, “Whomever Allah wishes well for, He gives deep understanding (fiqh) in matters of religion” (Bukhari 71, Muslim 1037). This fiqh (deep understanding) is knowledge that is coupled with understanding —‘ilm is to know something; fiqh is to know something deeply, with understanding. Imam Nasafi, the great Hanafi jurist and exegete, explained that this deep understanding has a transformative effect—if true, it invariably results in action, for the one who truly understands acts in accordance with their realization. This acting—with the hearts and limbs —is likely to be consistent and steadfast, because it results from deep understanding. On the other hand, action based on the impulses of emotion is like student activism—one sees a flurry of activity for a period of time, and then it ends when one “moves on” in life with marriage, a career, and related concerns.

Even more dangerous than loss of religious commitment is the losing of one’s very faith. Laqani says in his creed, fa kullu man qallada fi’t tawhidi / imanuhu lam yakhlu min tardidi, or “Whoever believes through mere following / Their faith is not safe from creeping doubts.”

In the turbulent world we live in, many things can happen that challenge one’s beliefs. Faith based on emotional attachment to the way of one’s parents or community is easily eroded by creeping doubts. Often, these doubts grow because one is unable to respond to the intellectual and spiritual challenges one faces as an individual and citizen in a global community where Muslims live under questioning eyes.

A similar thing often happens to Muslims in academia. It is no doubt important for Muslims to get involved in academia, and to be active participants in the intellectual debates of our age—whether related to Islam, or more general.

However, when Muslims enter academia unequipped—but with the best of intentions and the noblest of goals—they put their religious commitment and very soundness of faith on the line. The challenges are not simple; and simple emotional attachment and religious goodwill isn’t enough.

What happens time and again is that such Muslims either succumb to prevalent academic currents that run counter to basic Islamic understanding, or become disillusioned and fail to make a meaningful contribution.

Imam Taqi al-Din al-Subki mentioned that there are three conditions for engaging in the study of scholastic theology:

(a) sound knowledge of the religious sciences, to know what is right;

(b) sharp intellect, to be able to reason soundly and engage others’ arguments;

(c) a strong religious practice, so that the intellectual challenges one faces do not spiritually drain and weaken one.

These three conditions are critical for Muslims living in the modern world, if they wish to base their religious commitment on solid ground.

The question arises: how is this done, realistically? Here, we have to turn to our tradition. The transmission of our religion and its preservation has been through studying with scholars, and keeping their company.

This is the means of gaining knowledge with understanding—knowledge itself may be gained haphazardly through books, but understanding can’t. The Prophet (may God bless him and give him peace) said, “Knowledge is only through learning (ta‘allum)” (Haytami, Majma ‘al- Zawa’id I.340, from Bazzar, with a trustworthy chain of narrators). Learning (ta‘allum) entails studying under a teacher (mu‘allim). This gives one understanding, a living example of the knowledge one gains, and also a guide to turn to when confused. After all, “Asking is the cure for confusion,” as the Prophet (Allah bless him and give him peace) told us (Abu Dawud 336, Ibn Maja 572, with a sound chain).

This means of learning also ensures that one’s understanding is well-rounded, and balanced—without the extremism of emotional calls to merely outward activism, for learning is a calming process that imbues one with the capacity for restraint and reflection. Living examples of piety and faith stir one towards spiritual transformation. And, ultimately, it is only the spiritual transformation that results from fiqh—deep understanding that results in consistent action—that sustains religious commitment.