You must hold fast to all the acts of devotion which you perform regularly when you are not travelling. Do not make light of leaving any of them. You should make up any acts of devotion which you are unable to perform due to travelling when you are able to do so, if they are of the sort which can be made up. If it is not possible to make them up, then remember that Allah has made things easy for people travelling. The hadith states: “If a believer travels or becomes sick, Allah orders His angels to record for him the same actions that he would perform when he was not travelling and was in good health.” This is a blessing, a mercy and ease from Allah. All praise be to Allah – He is so merciful and kind to His slaves! 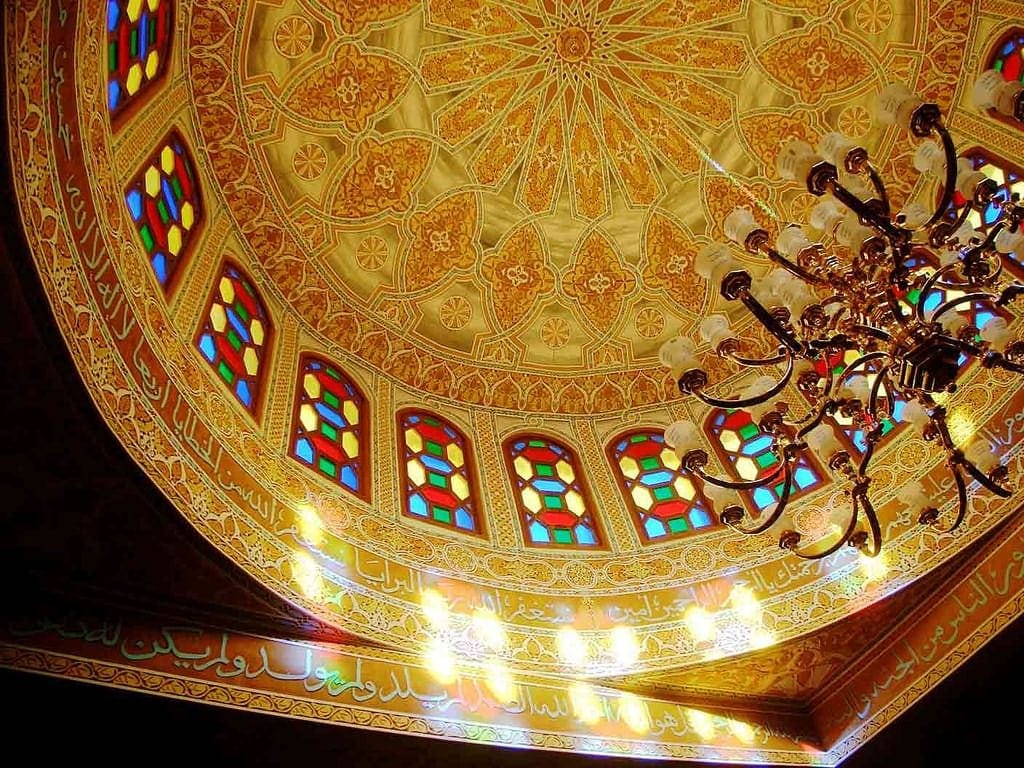 Beware of belittling the dispensations of shortening and joining one’s prayers when it is permissible to do so, for “Allah loves for people to take His dispensations just as He loves people to perform that which has normally been made compulsory for them.”
Be consistent in reading the supplications that it is recommended to read while travelling, such as the supplication you read upon mounting (your horse) or dismounting,  or the supplication you read upon entering a town. You will find a large amount of these in al-Adhkār [of Imām al-Nawawī] so look for them and memorise them.
When you travel, make your spiritual ambition drive your feet forward and make your heart travel with your body. Let reliance upon Allāh be your provision, having a good opinion of Him your support, truthfulness your vehicle and neediness and brokenness your inner and outer garments. Let your contentment with Him to the exclusion of all others be your companion.

You must purify your intention to go to Allah’s Sacred House, to perform the rights of Ḥajj, to venerate the things which He has made inviolable and sacred and to visit the grave of His Prophet, may Allah bless him and his family and grant them peace. In your journey to those places you should have no other purpose or aim except this and any other praiseworthy intention connected to this. Beware of combining these noble intentions with the desire for recreation or trade.
You must make ṭawāf (circumambulation) of the Ancient House in abundance, for the one making ṭawāf is immersed in mercy. While you are doing so, your hearts should be overflowing with veneration and magnification for the Lord of the House. Do not busy yourselves with anything other than recitation of the Qur’ān, remembrance of Allah and supplication. Beware of idle speech.
Be consistent in reading the adhkār and supplications which should be read during ṭawāf and sa`ī and in other places on the Ḥajj. You should also have the utmost concern for visiting all the sacred places.
You should perform `umrah in abundance, especially in the month of Ramaḍān, for performing one `umrah in Ramaḍān is equal in reward to performing Ḥajj with the Prophet, may Allah bless him and his Family and grant them peace.
You must have veneration for the two Sacred Precincts and observe the correct etiquette in them. You must also honour those living there, and give them the right due to them for living in proximity to those blessed places. Maintain a good opinion of them specifically and of the Muslims generally. If you see or hear something you dislike, be patient and remain silent. However, if you are able to openly speak the truth then do so, for no one has any excuse to remain silent unless he is absolutely certain he is unable to change a wrong that is being committed.
One of the best states to be in is to focus fully on Allah and on worshipping Him such that you are unaware of the state of those around you, since the people of this time have contravened the way of the pious predecessors and left behind their praiseworthy teachings. The one who Allah guides is rightly guided; but the one who Allah causes to go astray – for him you will find no protector to guide him. 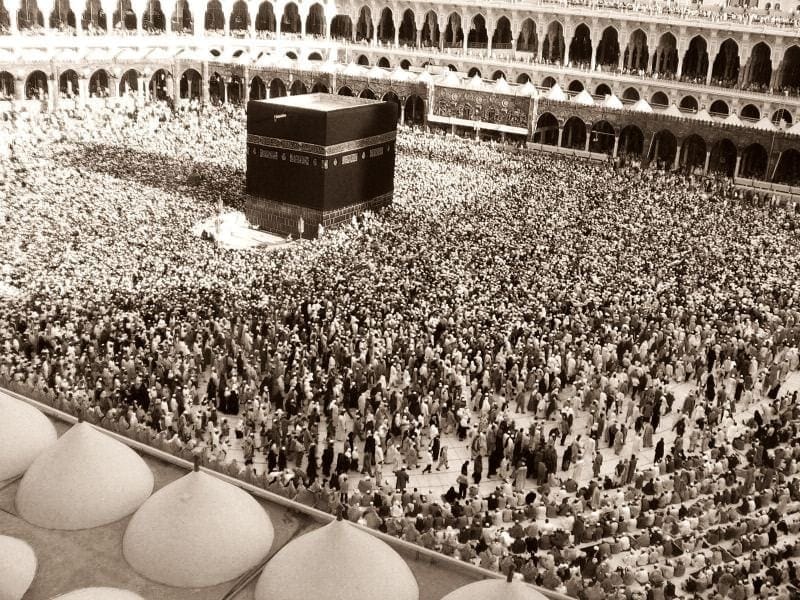 You must perform abundant pious acts in the Sacred Precinct in Makkah, for one good deed therein is rewarded one hundred thousand times over. This multiplication is narrated specifically regarding the prayer by the Messenger of Allah (peace and blessings be upon him) but some scholars regard it to apply to all acts of obedience. Just as the reward for acts of obedience is far greater in the Sacred Precinct, likewise acts of disobedience are far graver therein. One of the pious predecessors said: “There is no place where someone is taken to account for wishing to commit an act of disobedience other than Makkah.” The scholars use as evidence for this Allah’s saying: If Anyone wishes therein to do wrong out of deviance We will cause him to taste a painful punishment.
Ibn `Abbās, may Allah be pleased with them both, said: “I would prefer to commit seventy sins outside the Sacred Precinct than to commit one sin in Makkah.” May Allah protect Makkah, and increase it in greatness, stature and nobility.
When you reach His inviolable House and your eyes gaze upon it, make your heart gaze upon the Lord of the House. Ḥajj has an outer element and an inner element. The outer element is the Sacred Law (sharī`ah) and the inner element is reality (ḥaqīqah). Do not focus on one element to the exclusion of the other, but rather combine the two.
Know that there is a house inside you that belongs to Allāh, which is your heart. He has ordered Ibrāhīm (your knowledge) and Ismā`īl (your intellect) to purify it for the angels and spirits who wish to make ṭawāf (circumambulation) of it, seclude themselves in it, bow and prostrate in it.[6 – See below] Anyone who possesses neither Ibrāhīm nor Ismā`īl is ignorant and foolish, and the Fire will consume him. Anyone who possesses them both but does not allow them to purify the house so that it is fit for those who wish to make ṭawāf (circumambulation) of it and seclude themselves in it, is a representative of the Devil. An example of such a person is a heedless scholar who does not act according to the dictates of his knowledge and intellect.
The Prophet ﷺ said: “Zamzam water is what it is drunk for.” This means that if someone drinks it for a sickness, Allah will heal them; if someone drinks it for hunger, Allah will cause them to be satiated and if someone drinks it for a need, Allah will fulfil that need. This is because the well was brought forth when Allah’s aid was sought and Allah gave relief to Ismā`īl by it. The great Imāms have tried this with their own needs and found the Prophet’s words to be true. However, it requires a correct intention and sincerity and it is not for everyone.

CONCLUSION: STORIES OF THE PIOUS

This conclusion is somewhat appropriate to the counsels which preceded it, and someone of intellect and intelligence may derive etiquettes from these narrations which he should observe in those sacred places.
Mentioning the pious predecessors and their lives gives comfort to travellers on the path to the next life, for they are the examples which we should take. Looking at their striving helps seekers to realise their shortcomings. If someone looks at the people of his time and their heedlessness and procrastination, he will most often become proud of himself or harbour a bad opinion of them, both of which are blameworthy. The felicitous one is someone who emulates the pious predecessors, uses them as a proof against himself and drives himself to walk in their footsteps and to follow their straight path.

TURNING TO THE MESSENGER OF ALLAH

We round off these counsels with Imām al-Ḥaddād’s address to the Messenger of Allah ﷺ on his visit to him.

We have come to you as visitors, aiming to attain your intercession with Allah in wiping out our sins and wrongdoings
In our souls are needs and requests that we hope to be fulfilled through your status, O Giver
Turn (to Allah), O Messenger of Allah, regarding every need and concern of ours in our worldly lives and in our hearts
The rectification of my religion and my heart is my utmost goal, my Master, so assist me.
May Allah’s blessings be upon you, for you are the best one who guides by the light of Allah in the East and West.