Dear Friends,
We’d like to share some exciting news with you.
We are pleased to announce that The Three Faiths Forum Interfaith Gold Medallion for 2012 has been awarded to Fuad Nahdi – Executive Director of Radical Middle Way and the founding publisher of the pioneering magazine Q-News – for his tireless and lifelong contribution to building bridges between peoples of different faiths.

The award was presented by singer-songwriter, philanthropist and global changemaker Yusuf Islam, who was the guest of honour at the awards ceremony hosted by Canada House in Trafalgar Square, London. The occasion also marked the 15th anniversary of the Three Faiths Forum and celebrated the achievements of educators and students who have been involved in linking schools of different faiths together to promote understanding and engagement.

In his acceptance speech Fuad called for bold new thinking about interfaith action: “Exploring our mutuality and joint understanding is not about being wishy-washy and watering down faith. It’s about delving deeper into it. We are moved from the ages of conversion to the age of convergence. Finding what we have in common is a duty and a responsibility of faith.”

Reflecting on his journey from his birthplace in Mombasa, Kenya, Fuad added: “It is too easy to forget how closely bound we all are. For someone like myself in the Muslim tradition, interfaith is not an option. It is an intrinsic part of my faith. We must keep talking to each other, appreciating each other, if only to understand ourselves and our own faiths a little better.”

Fuad served as a member of the Archbishop of Canterbury’s Listening Initiative on Christian Muslim Relations (2001 – 2004) which led to the creation of the Christian Muslim Forum. He is also on the Advisory Group of the Three Faiths Forum, an organisation he closely worked with the late Shaykh Zaki Badawi to support during its early years.

In 2010, his paper ‘Faith and Phobia: Religion and Secularism in Modern Britain’ launched Inter-Faith Week and is due to be published as a monograph in 2013. Recently Fuad has been involved in facilitating dialogue between leading Muslim and Christian religious leaders around the issue of the place of non-Muslim minority communities.

For three successive years Fuad has been widely recognised in the UK and across the Muslim world. In 2006 he was awarded the inaugural on the first Mahabba Award in Abu Dhabi, UAE, in recognition of his role to make Islam and the Prophet Muhammad better understood in West. For the last three succeesive years he has been named one of the world’s 500 most influential Muslims in the prestigious survey/listings by the Royal Islamic Strategic Studies Centre in Amman, Jordan.

In his introductory speech guest of honour Yusuf Islam shared aspects of Fuad Nahdi’s contribution towards change in British Islam: “Your name, Fuad, means heart – and that is what you are. Your great contribution has been to be the middleman – the deliverer of so many good, original ideas which have been to the benefit of all communities.

In his personal message, Archbishop of Canterbury Dr Rowan Williams said, “It has been a privilege and a joy to have worked with you in recent months in ways which have helped to bring an inter-religious dimension to new areas. You model a confident openness and a willingness to be outspoken yet with the humour and joy that brings people together rather than driving them apart.”

The Grand Mufti of Bosnia-Herzegovina said: “Our world has enough theories and talking shops – but what it needs is people who can take some of the grand ideas and turn them into real experiences. This is a task of a special breed of mankind – people who have been given the intellectual ability to understand, the passion to appreciate and the desire to act. You are such a person and God bless you for that.”

Thank you to all those who have so generously and tirelessly supported the work of Radical Middle Way over the past 7 years! Fuad and the rest of the team look forward to working with you in the future.

If you’d like to get in touch please e-mail us at info[@]radicalmiddleway.co.uk.

With best wishes and prayers, 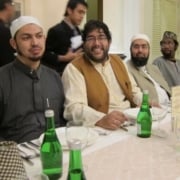