Writer, women’s aid worker and mother of three, Jazmin Begum Kennedy has little patience for the sense of shame often attached to a girl experiencing puberty and menstruation.
Puberty – yes, the dreaded P word – is such a daunting phase for parents, but it really shouldn’t be. Physical changes in the body, hair growth, body odour, and of course, the imminent first period, should be something to be celebrated, not an embarrassment. For girls, developing breasts and having their first period are major turning points in their lives; this is their transition from girl to womanhood, so why should there be shame attached to it?

In many cultures, society deems puberty for women as embarrassing, unclean and something no one should speak openly about. The physical changes in pubescent bodies can be traumatic and confusing for any girl, without having to face this stigma. Allowing our young girls to believe they should feel shame only adds to the stress and anxiety, possibly even leading them to despise their own bodies.
As grown women, we all know that menstruation isn’t exactly a walk in the park and so young, impressionable girls grow up dreading this life-changing event. It’s a crucial time and parents need to be actively involved in offering assistance and empathy. 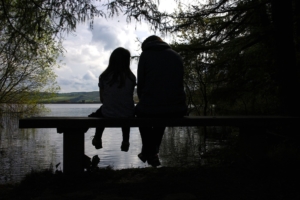 In the South Asian culture I come from, we’re taught not to leave sanitary products in the family bathroom for fear of discovery by the menfolk – menstruation is a closely guarded secret of which the men must remain completely oblivious. A recent discussion on the Muslim Mamas page I help administer, revealed that many women were woken by their mothers for the pre-dawn meal during Ramadan (suhoor) while menstruating, even though they were religiously excused from fasting. If they didn’t join in, their father and brothers would know they had their period and this was an unthinkable option. Many lied about fasting and even pretended to offer the five daily prayers just to keep up the pretense.
It sounds ridiculous but it’s common in many cultures, not just mine. Menstruation is a fact of life. Every woman on this planet experiences it from puberty onwards so why all the secrecy?

The Example of The Prophet ﷺ

I read this remarkable story recently about Umayyah bint Qays (may Allah be pleased with her) a pre-pubescent girl who joined the Prophet Muhammad ﷺ and his army on their way to Khaybar.

“Then we set out with him. I was a young girl. He made me sit on his she-camel behind the luggage. I saw the bag had got traces of blood from me. It was the first time I had a period. Then I sat forward on the camel [to hide it] and I was embarrassed. When the Messenger of God ﷺ saw what happened to me and the traces of blood, he said, “Perhaps you have had menstrual bleeding?” I said, “Yes.” He said, “Attend to yourself. Then, take a container of water, then put salt in it, then wash the affected part of the bag, then come back.” I did so. When God conquered Khaybar for us, the Prophet took this necklace that you see on my neck and gave it to me and put it on my neck with his own hand. By God it will never be parted from me.” She wore the necklace her entire life and stipulated that she should be buried with it.”

SubhanAllah, this young girl started her first period, on a camel, away from her womenfolk, surrounded by men including the greatest man that ever walked the earth. When the Prophet ﷺ saw the blood, he didn’t embarrass her nor shout, “Astaghfirullah! Haraam! You should be at home, with your mother!” Instead of ordering her to leave, as she was now mature, he taught her about purification at that moment in time. He didn’t scold her or accuse her of being a fitnah, nor tell her to cover up more; instead, he made this embarrassed young girl feel honoured and special by giving her a gift. How many men – or even women, do we know, who would react that way?
In contrast, we are mortified if the tiniest drop of blood leaks onto our clothing. We are often mocked, our self-esteem takes a hit and we become painfully self-conscious. In some cultures, menstruating women are even told they should keep out of sight.

I firmly believe that we need to educate people on the blessings of menstruation. During Ramadan, menstruating women are not handicapped in their attainment of rewards. The angels continuously write down their good deeds so long as the women are performing these in order to please Allah. It is the one time Allah has exempted us from obligatory prayers – this “break” is an ideal time to reflect and recuperate.
We can’t remove the stigma associated with menstruation overnight as it is the result of deeply ingrained attitudes in both men and women, but as parents, particularly mothers, change can begin in our own homes. Mothers are the first friends and teachers. It’s our role to guide our children – don’t leave this important task with the teachers at school.
We need to mentally prepare our girls, reassuring them that the changes are natural, and support them every step of the way. Instead of an awkward, uncomfortable time, we should make it a happy transition to womanhood. Yes, menstruation can be difficult for some but none of it is unsurmountable.

Here are my suggestions as to how, as mothers, we can make the transition as smooth as possible.
1. Communicate: Talk to your daughter. You went through this yourself so you shouldn’t be embarrassed to openly discuss bodily changes. In this confusing and emotional time, she needs your experience, wisdom and gentle support. Her hormones will cause havoc with her emotions and it can all be overwhelming, so be there for her and explain it all in an easy-to-follow manner.
2. Pubic Hair: Show your daughter how to remove pubic hair and teach her how often, Islamically, she is required to remove it. Try several methods of hair removal to find the one that ismost comfortable for her. Discuss personal hygiene. Turn the issue of sweat and body odour associated with puberty into fun mother and daughter time as she tries out different products with you.
3. First Bra: Take your daughter for her first bra fitting. On the Muslim Mamas page, many mums said they found shopping for such personal items embarrassing. Many recalled their own experience of puberty as just being given vests and bras to wear with no explanation and so, they planned to do the same with their own daughters. Let’s break the pattern. Remember, Imam Ali (may Allah be pleased with him) said, ‘Do not raise your children the way your parents raised you; they were born for a different time’.

4. Menstruation: Discuss all the dos and don’ts of menstruation. The average age for puberty used to be 11 or 12 but girls are experiencing it as early as 8 or 9 these days. Ensure you prepare her well in advance so it’s not unexpected and frightening for her. Puberty at this age is more difficult as children rarely think about personal hygiene, let alone the added responsibility of changing sanitary towels, keeping themselves clean and properly disposing of the pads. Lighten the load by instructing them carefully. Buy a separate bin for them and create a space for all their cleaning products.
5. Inform The Men. You don’t need to announce it to the world; we must still practice haya but fathers and brothers need to be aware of the changes in their daughter or sister. If she isn’t praying or fasting due to menstruation, then tell them rather than hide it. It’s much easier to inform them in advance than to have them ask about it. If you explain menstruation to a brother, then he’s far more likely to show his sister and other girls respect and not ask insensitive questions. It’s imperative that boys learn never to mock as doing so causes anxiety and self-consciousness.
6. Learn: Enroll into a Fiqh of Menstruation course. If your daughter is old enough, have her join you. Use this opportunity to bond with her and be sure to end it with dessert. Your daughter will always remember the sweetness of the day. Buy a comprehensive book on this subject. I would recommend Ustadha Hedaya Hartford’s Coming of Age, a book aimed at teenage girls. There’s also Imam Birgivi’s Manual Interpreted: Complete Fiqh of Menstruation & Related Issues. This book is the explanative translation of a major Islamic legal work on menstruation, lochia, and related issues. It provides accurate information and practical arrangement of charts and texts making it an important reference for every Muslim family.
7. Be Prepared: After having the ‘talk’ with your daughter, prepare a beautiful hamper containing things she will need for the coming of age phase. Here’s the First Blush of Womanhood hamper I created for my daughter.

Make this hamper an exciting gift, and use it as an opportunity to show your willingness as a parent to involve yourself actively in this special phase of her life.

Jazmin Begum Kennedy (JBK) is a ‘Qualified Housewife.’ By day she is a mother, wife and teacher; by night she wages war against oppressors and writes books. She is an experienced teacher of primary and secondary education, an acclaimed professional artist (JBK Arts) and published author of Mercy Like the Raindrops, Blessed Bees, No School Today and the upcoming novel, Fifteen. Jazmin is an online counsellor specialising in domestic abuse, rape and child abuse. She also physically helps victims of domestic violence flee their abusive marriages. She is the co-founder of the Nisa Foundation, working as a women’s aid worker for victims of domestic violence. JBK currently homeschools her three children, whilst managing a network for Home Educators in the Greater Manchester area of the United Kingdom.

Mother and daughter by the lake, by Chris Wood.