The Muslim world has lost one of its giants with the passing of Shaykh Shukri Al-Luhafi. Despite his stature, it is unlikely that anyone reading these words who is not from Syria has ever heard of Shaykh Shukri. Before I arrived in Syria, in 1994, to begin my studies there, I too did not know who he was.

Upon arriving in Damascus, Shaykh Shukri was one of the first scholars I met. Our most generous host, Abu Munir Sha’ar, had arranged callighaphy lessons with the Shaykh. A motley gang of Americans made our way through the streets of Damascus to the Shaykh’s apartment for an introduction. Upon arriving at the building housing the Shaykh’s home, we descended down a tight stairwell into a dimly lit, cramped basement apartment. This was the Shaykh’s humble abode.

Only Musa Furber proved to be a consistent student of the Shaykh. I had become involved with other pursuits, although I would visit from time to time. I would also see the Shaykh at every public dhikr and the accompanying lessons that I was able to attend. The Shaykh had a very distinct way of arriving at the various masjids where the Dhikrs would occur. Specifically, on a rugged, Chinese-made black bicycle. He usually had a couple of children on the crossbar and two or three more on the makeshift backseat. 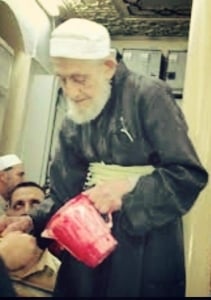 As the attendees filtered into the venue, Shaykh Shukri, with the hint of a smile teasing his lips, would serve water. He was the waterman. This beautiful practice, like his home, like everything about him, spoke volumes about his humility. What exactly is humility? Some define it as assuming a station lower than that one could rightfully claim. By this definition, Shaykh Shukri was truly humble. Why? Because he could claim being a leading scholar in Damascus. He could claim that he was a renowned callighapher. He could claim being a master of the ten canonical readings of the Qur’an. We could add to the list of the things he could rightfully claim, however, he renounced all claims. He was the waterman.

When the great master, Shaykh Abdur Rahman Shaghuri, became too ill to continue commenting on the various texts read at the public dhikrs, that task fell upon my teacher, Shaykh Mustafa Turmani. One day Shaykh Mustafa was unable to make it to the dhikr, and hence, the lesson. The attendees, knowing Shaykh Shukri’s scholarly attainment, asked him to comment on the text. The Shaykh read the text, verbatim, not adding a single word of his own commentary, and then quietly closed the book. His respectful reverence, despite his qualifications, would not allow him to speak in the place of Shaykh Mustafa. 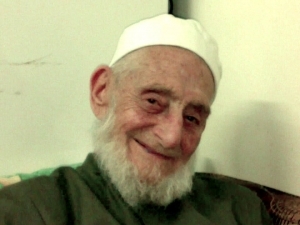 Upon the passing of Shaykh Mustafa, the leadership of the Shadhuli Tariqa in Damascus was assumed by Shaykh Shukri. Now, at last, he spoke, and he guided the faithful with wisdom, courage and vision from that time until his demise.

I write these words with tears welling in my eyes as I remember this humble servant and as I reflect on how blessed I am to have had the honor of sitting in his home, eating his food, been served by his hand, listening to his silence, and benefiting from his state as well as his very parsimonious speech. May Allah grant him the highest ranks of Paradise and may He bless us to elevate ourselves to begin to carry even a small fraction of the load Shaykh Shukri has entrusted to us.

“There is no one who humbles himself for Allah’s sake, except Allah elevates him.” Prophetic Hadith.