In the name of Allah the Most Merciful, The Most Compassionate. Praise be to Allah, Lord of the Worlds. May Allah’s peace and blessings be upon Sayyiduna Muhammad and His Folk and Companions.

In any matter that faces the believers, individually and communally, they would not find a better recourse than to the Sunnah of the Prophet (peace and blessings be upon him).

Times of trial are reminders to hold fast to Allah and to find safety and solace in following the way of our beloved Messenger (peace and blessings be upon him).

It is related that when the Messenger of Allah (peace and blessings be upon him) would exit his house he would say: 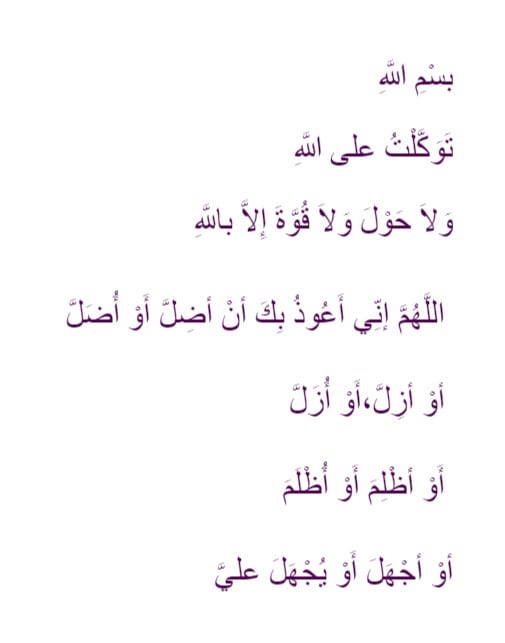 In the name of Allah, I trust in Allah; there is no might or power but in Allah. O Allah! I seek refuge in You lest I stray or be led astray, or slip or be made to slip, or cause injustice, or suffer injustice, or do wrong, or have wrong done to me.”

This supplication, as it appears here, is a combination of reports from the Sunnan of Abi Dawud, on the authority of Sayyida Umm Salama and Sayyiduna Anas ibn Malik (may Allah be well-pleased with them all).  Imam an-Nawwawi, in his Adhkar, collected similar narrations from at-Tirmidhi, an-Nasaa`i, and Ibn Maajah.

Ibn Allan, in his commentary on the Adhkar, entitled al-Futoohat ar-Rabbaniyya, explains that the Prophet (peace and blessings be upon him) taught this supplication to his ummah to teach them how to seek refuge from all harm in their dealings with people, both outwardly and inwardly. This can only come about through humbly turning to Allah, Most High, and asking for steadfastness upon the straight path.

He quotes at-Teebi as saying, “One who exits from his home will engage with people, and so it is feared that he would swerve from the upright way; either

Ibn Allan explains that each one of these is a foundation in itself, not redundant. 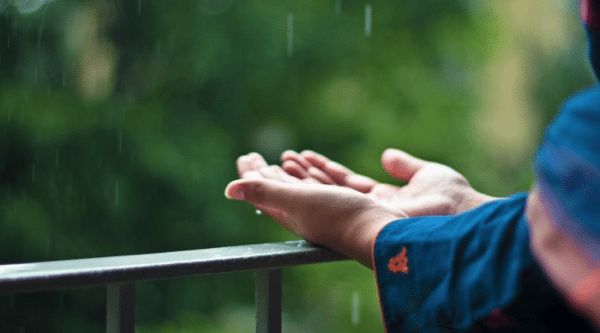 “In the name of Allah, I trust in Allah; there is no might and no power but in Allah.”

Through reliance upon Allah, the believer seeks to rise above every difficulty. This is sought by invoking the name of Allah with the intention of seeking His Assistance, Gentle Care, and Facilitation and that His Power protects one’s acts from deficiency and inconsistency.

Muslims often become exasperated by the default state of suspicion placed upon them in the wake of terrorist attacks.  While we must take every means to enjoin good and forbid evil and avert all forms of harm, it is not by our efforts that the truth prevails.  Rather, above all of that is the duty to trust in Allah.

“O Allah! I seek refuge in You lest I stray or be led astray, or slip or be made to slip “

Guidance is to uphold the truth in belief and word and deed. Straying from guidance (dalaal) entails being distracted away from the high aims for which we were created.

Worldly events often cause a shift in this focus and lead to negligence in upholding Slavehood to Allah.

The verb “zalla” means to slip from an elevated place. In this context it means falling from the lofty heights of adherence to the Straight Path to the low strata of following one’s caprice (hawa), or turning away from the dictates of God-consciousness (taqwa), or being consumed by the pursuit of worldly gains (dunya).  Misguidance is a willful turning from the truth, while slipping is an unintentional mistake resulting from weakness.

Even as Muslims feel threatened or unsafe, we must not lose our resolve to adhere to the obedience of Allah and His Messenger (peace and blessings be upon him) in all circumstances. This is the means to overcoming difficulty and the manifestation of true reliance upon Allah.

Thus, it has been reported on the authority of Sayyiduna Abu Hurayra (may Allah be well-pleased with him) that Allah immediately answers and an angel declares, “You have been guided.” [Sunan Ibn Maajah, Book of Supplications]

“I seek refuge in You lest I….cause injustice, or suffer injustice”

Dhulm means to place something in other than it’s rightful place or to take the right of another.

There can be no greater oppression than to take the words of Allah and His Messenger (peace and blessings be upon him) out of their proper place to achieve the exact opposite of their aims. However, a believer is responsible for his or her own actions.  Thus, one will not be asked about the oppression of others before he is first asked about his own.

One who has been protected by Allah from oppression will have what our Messenger (peace and blessings be upon him) promised, as the hadith continues to say:

“You have been sufficed.”, meaning, of every worldly and next-worldly concern by your reliance upon Allah.

“I seek refuge in You lest I…. do wrong, or have wrong done to me.”

This entails being ignorant of what is obligatory upon one or to act in a way that is contrary to the character of a believer or to be treated with like imprudence.

Incidents that provoke anger, fear and hatred are easily reciprocated with their like.  In that is a victory for the true enemy.

Thus the angel responds, “You have been guarded.”, meaning from the harm of your enemies, of devils and jinn, by your sincere consigning of all affairs to the Creator.

Concern For Others & Praying for the Good for all Believers

The Prophet (peace and blessings be upon him) was granted the most succinctly eloquent and vastly comprehensive speech.  In this short supplication, he teaches us to seek protection, both from these harms and from being the cause of leading others to them.  There is no harm to recite it in English for one who finds difficulty memorizing it in Arabic.

In the narration of at-Tirmidhi, the same supplication has been narrated in the plural, intending all the believers.  This is a general recommendation, as it is from wishing for one’s brother what one wishes for one’s self. [Sunan at Tirmidhi, Book of Supplications, on the authority of Sayyida Umm Salama from ash-Sha’bi]

Most of the Sunnah is habitual guidance; a consistent way of approaching our dealings with our Creator and our dealings with the creation.  Good habits are best established early. Through teaching this supplication to our children, explaining its meanings and reciting it with them consistently, every time we leave our homes, we pray that it’s beautiful meanings are imparted to them.

The reality of our modern world is that we now engage with people, to a great extent, through social media.  Thus, the harms from which we seek protection through this supplication are no longer limited to leaving one’s home.   As the aim of du’a` is sincere turning to Allah in neediness, it would be a good practice to recite this supplication or, at least, bring its meanings to mind in all human interactions.

O you who have believed, upon you is [responsibility for] yourselves. Those who have gone astray will not harm you when you have been guided. To Allah is your return all together; then He will inform you of what you used to do. [Quran 5:105]