Imam al-Haddad in his work, Counsels of Religion, provided the following insights on Laylat’ul-Qadr and Reciting the Qur’an.

“In brief, the sagacious believer should be ready for Laylat’ul-Qadr ever Ramadan night. He must remain watchful and constantly engaged in good works. The important thing is that when it does come it finds him absorbed in his good works, remembering God the Exalted, neither distracted, heedless, nor absorbed in frivolity.

It is unimportant whether he actually witness Laylat’ul-Qadr or not, for the works of he who is absorbed in devotions during it will be equivalent to the works of a thousand months, whether he is aware or not which specific night it is.

We say: He should watch for it and be prepared every night of the month, because much disagreement exists between scholars as to which night it is. Some have gone so far as to say that it is hidden and can be any night in the month; also that it shifts and is not the same night every year. I am inclined to accept this opinion. I believe it can occur in other than that last ten nights, but more frequently does in them. This is the opinion of the majority of scholars.”

Section: On Reciting the Qur’an and Remembrance

I say: The meaning of ibn Mas’ud’s words is that the men of Qur’an should distinguish themselves from common people by their zeal in obeying God, their hastening to acts of goodness, the thoroughness with which they guard themselves against distraction and avoid frivolity, and their complete fear and awe of God the Exalted.”

“Ibn Mas’ud—may God be pleased with him—also said, “The Qur’an was sent down to be put into practice, but you have turned studying it into a job.”

The author of this book, Imam ‘Abdallah Alawi al-Haddad (died, 1720), was one of the most illustrious masters of the house of Bani ‘Alawi, the descendants of Imam Husayn who settled in Hadramawt, and is widely held to have been the spiritual re newer of the twelfth Islamic century. 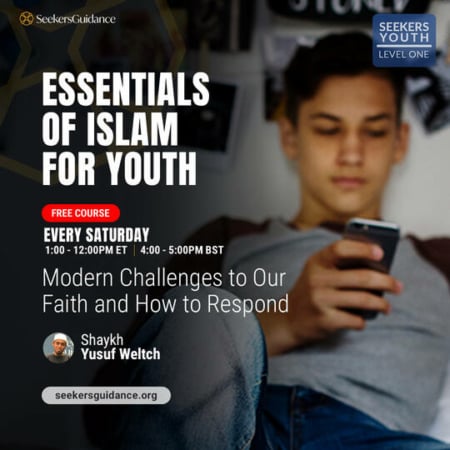 Essentials of Islam for Youth: Modern Challenges to Our Faith and How to Re...