In this second article of the The Trodden Path series, Shaykh Shoayb Ahmed writes on the life of the Syrian scholar, Shaykh Tahir Al-Jazairi (RA). 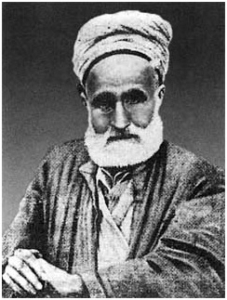 His father Muhammad Salih emigrated from Algeria to Damascus in 1846 (1263) along with the great Algerian leader Abdul Qadir Al-Jazairi. He lived there until he passed away in (1285). His father was a scholar in the Quraanic sciences and a reputable scholar in the Maliki Madhab. He was the authorized Mufti on behalf of the Madhab in Damascus.

Shaykh Tahir received his early education from his father; thereafter he studied with other ulama in Damascus. His father, Shaykh Salih migrated from Algeria after the French occupied their lands and imposed various pressures on the Muslims. He was a scholar and was responsible for Fatwa in the Maliki madhab in Damascus. He also read and repeated the lessons in Sahih Al–Bukhari on behalf of Shaykh Ahmad Al-Kuzbari in the Umawy Mosque. He authored a few useful books. He passed away in Damascus in 1868 (1285).

He studied Arabic, Turkish and Persian under Shaykh AbdurRahman Al-Banushnaqi. He also studied French, Syriac, Hebrew and the Ethiopian Language. He also knew some of the Berber tribal languages, particularly of those who inhabited parts of Algeria.

The scholars under whom he studied the various Islamic sciences with were many. One of them was Shaykh Abdul Ghani Al-Ghunaymi Al-Maydani (1222-1298=1807-1881, author of Al–Lubaab in Hanafi Fiqh, Sharh Al–Aqeedah Al–Tahawiyah and other books), who was one of the most senior Hanafi scholars who was a student of Imam Ibn Abideen (author of Rad Al–Mukhtar), one of the greatest Hanafi scholars in that century. From him, Shaykh Tahir learnt how to be thorough, accurate and precise when analyzing complex fiqh issues.

Shaykh Tahir devoted all his time and energy towards studying which also included studying the natural sciences. He also studied mathematics, astronomy and history. His knowledge of history was superb and in addition he was very well acquainted with the biographies of the previous scholars and their books.

In his youth, he was among the founders in a charitable organization that was established by a group of scholars of Damascus in 1877 (1294). In 1878 (1295), at the age of 26 he was appointed as a general inspector for the primary schools. During the period he served in this position, he wrote some books that were necessary at the time for pupils in various levels. Together with Shaykh Ala Al-Din Abidin (d.1888), they agreed to establish the Al-Jamiyat Al-Khairiyah Al-Islamiyah that was very active in Damascus and was responsible for establishing many schools.

In 1879 (1296) he attempted to gather in one place all historical manuscripts from the endowment libraries in Damascus. The result of his efforts was the establishment of the Zahiriyah Library that became one of the most prominent libraries in the Arab world because of its valuable collections of manuscripts.

After his success with this library he strove to repeat the same in Jerusalem to establish the Khalidiyah Library in Al-Quds. Shaykh Tahir continued to serve the knowledge of Islam through his writing, teaching, and promoting it through his libraries.

His activities increased after 1886 after he had abandoned his work with the government. He devoted his time to teaching and towards promoting various reforms.

In 1907 (1325), he faced some harassment and pressure from the Turkish authorities in Syria. As the result he immigrated to Egypt where its scholars welcomed him, especially the likes of Ahmad Taimur Basha and Ahmad Zaki Basha.

He refused to take a cent from the State, because he feared that he would be forced to be silent on issues that were not palatable to the leaders. Instead, he lived by sacrificing his most beloved possessions. He sold his books and his manuscripts in order to survive. Even in these desperate times, he chose to sell his books to Dar Al-Kutub Al-Misriyah for half the price he would have received from the British Museum because he wanted to ensure that the books remain in Muslim lands.

Shaykh Ali Yusuf and Ahmad Taimur Basha tried to allocate some position to him, which would enable thousands to benefit from his vast knowledge and at the same time he would receive a salary. He excused himself because of his old age and his inability to fulfill official administrative and time requirements and also because he was accustomed to reading and researching the whole night right until Fajr. This was particularly his practice in the last forty years of his life. He remained in Cairo for about thirteen years and in 1920 (1337) he became seriously ill, and he returned to Damascus. Soon after his return he was elected as a member of the Arabic Academy in Damascus and the Director of the Zahiriyah Library. He passed away four months later in 1920 (1338) and is buried on the Qasiyoun Mountain in Damascus, Syria.

As Shaykh Taahir was so careful about utilizing his time, he did not care about his appearance and dressed very shabbily. He never married and used to spend a great deal of the night with his friends and the remainder in reading and writing. He enjoyed swimming and walking as an exercise. He was very particular about performing his salah punctually to the call of the adhan, no matter where he was. He defended the Arabic Language and the Hijri Calendar.

Although he was modest by nature he was fiercely independent. He never accepted any gift from the rulers. When he was financially in need, he continued to sell some of his books. The most expensive and dearest thing to him was his books and the time he spent studying and conducting his research. Nothing at all distracted him. He was able to answer questions that were posed to him with ease and was very annoyed at those who tried to insult the scholars.

He used to prepare a large quantity of coffee that would last for a few days to save on preparation time.

He drank coffee to give him energy and to keep him alert and awake. Whenever he left his home he always carried a book or some notes from which he could benefit, thus never wasting any time.

Despite the great amount of time he spent in reading, he advised students to lessen their reading during the holidays and, instead, to increase their sporting and recreational activities. He maintained that, deep immersion into books could lead to seclusion and alienation from people. He in turn had an excellent relationship with many scholars of Damascus that included; Shaykh Abdul Razaaq Al-Baytar, Shaykh Abu Al-Khair Abidin, Shaykh Salim Al-Bukhari and his special friend Shaykh Jamal Al-Din Al-Qasimi (author of a 17 volume Tafsir titled Mahaasin Al-Tawil fi Tafsir Al-Quran Al-Karim, 1283-1331=1866-1914). Shaykh Tahir visited Shaykh Jamal Al-Din daily from the beginning of 1906 until he left for Egypt in 1907. He attended Shaykh Al-Qasimi’s lessons in Mustalah Al-Hadith and Tafsir. Shaykh Tahir even reviewed Shaykh Al-Qasimi’s book in Mustalah Al-Hadith. They continued to correspond with one another even when Shaykh Tahir was in Egypt. Many orientalist scholars respected him and consulted him on numerous occasions. The Jewish orientalist scholar, Goldziher was one such scholar who even attended the Shaykh’s lessons in Damascus and translated his book Towjeeh Al-Nazhr  into German.

He wrote many books, over 35 in number on various subjects. These include aqidah, ulum Al-Quran, tajwid, the science of hadith, sirah, usul, Arabic rhetoric, Arabic literature, the philosophy of natural mathematics, history and introductions to many Islamic manuscripts.

His most important books are:

Some of his works are still manuscripts and have never been published. Some of the titles are:

He could be distinguished from many of his contemporary scholars because he enjoyed the following:

* This biography may be found in the book: Muslim Scholars of the 20th Century by Shaykh Shoayb Ahmed

This article is transcribed by a SeekersGuidance scholarship student based on th...
4 mins