In this series, Shaykha Tamara Gray narrates the stories of great Muslim women through the centuries, who excelled in fields of Islamic knowledge, science, and philanthropy. This segment

Fatima bint Saad al Khayr was born in China to a family originally from Valencia in Islamic Spain. She grew in a home of great scholarship, and at age seven she was sitting in hadith circles as a serious student of knowledge. At age 19, she was an accomplished scholar, which indicates that perhaps she was a child prodigy.

After she got married, she moved to Damascus with her husband. He was a secretary to Nur al-Din Zenghi, the teacher and mentor of Salahuddin. She became a sought-after teacher in Damascus. and later moved to Cairo where students would travel  to learn from her.

Fatima bint Saad al Khayr is an immense example of dedicating one’s life to the study of Sacred Knowledge. 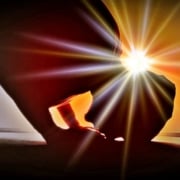 What Is the Meaning of the Hadith "Ruined Are the Extremists"? Take a Closer Look at The Prophet's Heart

"Religion Is Ease", So Should We Take It Easy?