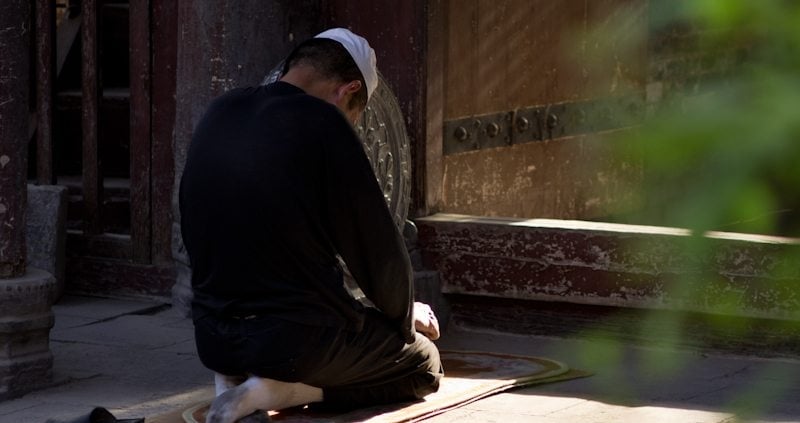 I have a close friend who is 14 and has recently converted to Islam. He attends the Friday prayer in school but hasn’t been able to pray at home yet, due to his parents not knowing. How should he go about telling his parents? If their reaction is negative, how can he continue practising Islam at home?

Answer: Wa’alaykum assalam. I pray you’re well. Alhamdulillah, may Allah guide your young friend in the religion, and make his faith firm.

There is no one answer to your question, as the best way to deal with the situation depends on many variables. How and when to deal with telling his parents about his conversion, if to tell them at all, largely rests upon on his relationship with his parents, the parent’s personalities and outlook in life, their understanding and exposure to Islam and Muslims, and indeed, the parents own religious convictions etc. All of these factors have to be taken into account.

However, we can offer general guidance that can be applied:

1. Make Du’a: The most powerful means to overcome any difficulties is to turn to and rely on the One who is in control of all affairs, their beginnings and outcomes. Your friend should ask Allah to guide him in dealing with his parents, to make the situation easy, and to make his Islam a source of happiness and guidance for them all.

2. Assess the situation: Your friend alone knows whether he should tell his parents now or later. This depends on what he feels his parent’s reactions will be. If they are kind and tolerable parents, then it may be a good idea to tell them sooner rather than later.

At the same time however, he should give himself enough time to feel comfortable in the religion. Becoming Muslim is a big step, and is the first of many steps. After one has entered Islam, this is actually where most of the guidance is needed for new Muslims, as many issues can arise and finding one’s way in the religion and among the Muslims is not always very easy.

For this reason, he should allow time for himself to adapt and build confidence in the religion, understand more of it and how faith translates into practice. This may be good to do before telling others, perhaps including parents, because speaking with some knowledge and experience is very different to speaking with no knowledge and no experience.

In the meantime, he can pray in his room, and avoid certain foods at home. Other than this, during this period of self-adaption, he does not need to implement every rule by the book at home, thereby causing confusion and discord to his unknowing parents.

On the other hand, if he feels that his parent’s reactions will be hostile and even threatening, then it would be better he does not tell them, for now at least, especially given his young age. In this case, he must just go about as normal, and pray in his room without bringing attention to his new faith. Allah knows everyone’s situation.

3. Mercy and love: If your friend does choose to tell his parent now, then he should ensure that he is respectful and calm at all times, even if they show anger, or become upset. Being defensive or aggressive won’t win anyone’s heart.

We have been commanded to be compassionate and kind to our parents in all situations. If we have to stay firm for the sake of the religion and this means upsetting parents, we stay firm without breaking their hearts any more than what may occur unavoidably. We then do our utmost to console them by other means. For this reason, your friend should show even more care and concern for them now he is Muslim than ever before, so they can see that his religion elevates a person and orders goodness and does not debase the person and invites to evil and harshness. Loving actions shoot through the heart with warmth and engenders acceptance, while harshness pierces with coldness and creates hostility.

3. Keep the message simple: Whether they accept his conversion or not, ultimately, most parents want what is best for their child. It is normal to fear what we don’t know, and for most non-Muslims, lslam is an unknown or even a threat. Your friend should be aware of this and understand it, as respecting and allaying other’s fears and concerns is usually more effective than standing defiant and defensive. It is not the unfamiliarity of Islam that may unsettle them, but it is the uncertainty of whether they will ‘lose’ their son to Islam.

If he does tell them, he should just speak from his heart and explain what stirred him to take this decision, and what he feels the religion has offered him. This personal approach will have much more effect on his parents because they will know by own that it is their son speaking, and not the influence or voice of others.

While contentious questions about Islam may arise, he should avoid entering into detailed discussion on peripheral or politicized aspects of the religion, but rather, return everything to the pure essence of Islam, meaning believing in one God, all the Prophets, the books etc., and the 5 pillars.

The aim in this approach is to build upon what is common ground or familiar to them, rather than discuss the many unfamiliar aspects or issues in their mind connected to the religion. This way, we build on ready foundations, not having to dig out from scratch, bridges are built, not burned, and understanding can occur, not misunderstanding.

By doing this, the pure message of Islam will be made clearer to his parents, and they can begin to understand what is behind their son’s new faith without being distracted and their thoughts cluttered with other issues or previous notions they had in their minds. This simple approach will be easily and more readily processed and agreeable.

4. Speak according to their understanding: Also, he should speak with what according to his parent’s level of understanding. If he must discuss things in more detail, then he should use those things that he knows appeal to them or touches their hearts. For example, if they pride themselves in being tolerant, open minded people, then he should evoke the high principles they have always taught him to follow. If they are people who believe in doing charity and good works, then he should emphasise the Prophets charity and Islam’s stress on helping others. If they are neither of the above, perhaps even anti-religion or intolerant of others, but perhaps very family orientated, then he should focus on family and what the religion says about family ties and parents etc., or if they are material and money orientated, then he can put more emphases that Islam does not demand that we give up all our worldly life and comforts for the sake of faith, but rather it can be a balance of both, and so on.

5. Support: Lastly, it is important that you, as his friend, and others, continue to support him and guide him to clarity and ease in the religion. Do not overwhelm him with too much information, rather give him space, letting him get used to the absolute basics of the religion before anything else. Most importantly, keep him strong by being strong yourselves, and show him the beauty of the religion by being beautiful people.

May Allah make you and your friends among the strong believers and the next generation of leaders. Amin.