Question:  Assalamu alaikum. I was recently fortunate enough to spend some time in Makkah during Ramadan. I had a bad dream (I will not go into any detail) but was surprised as I previously understood bad dreams to be from shayateen and good dreams from Allah SWT.

How is it possible to have a bad dream if the shayateen are locked away in Ramadan?

May Allah ta’ala accept your Ramadan.

The Prophet peace and blessings of Allah upon him, said, “When Ramadan enters the doors of the Heavens are opened, the doors of Hell are closed, and the shayateen are chained.” (Bukhari, Muslim, and others)

However, because sins and other evil occurrences related to the devil still go on during Ramadan, scholars interpreted the last part of the hadith “the shayateen are chained” in different ways.

1.  It refers to those shayateen that try to stealthily listen to the reports of the Heavens.

2. It means that the shayateen are not able to incite the Muslims in Ramadan to the same extent they can at other times so they become “as though” they are chained.

3.  “Shayateen” here refers to some of them, namely the intensely evil ones amongst them.

4.  It means the lessening of evil during Ramadan. This is because even if all of them are chained, there will still be evil since evil has other sources e.g. immoral persons, vile traits, and evil people. 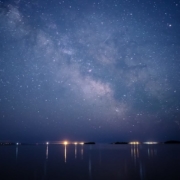 Bad Dreams and What They Mean