Is it bid’a or wrong in any way to place flowers on a family grave? There is much argument about this issue in my family.

Answer: Wa alaikum assalam wa rahmatullahi wa barakatuh,
I pray that you are in the best of health and faith, insha’Allah.
It is permitted to put flowers on a grave.
However, it may be superior to plant something, as opposed to merely place it on the grave, so it can live longer and increase in its benefit to the deceased.
Ibn ‘Abbas said, “The Prophet, may Allah bless him and grant him peace, passed by a garden in Madina or Makka and heard the voices of two people who were being tortured in their graves. The Prophet, may Allah bless him and grant him peace, remarked, ‘They are being tortured and are not being punished for anything very great.’ Then he said, ‘Rather one of them did not guard himself from urine and the other was involved in back-biting.’ Then he called for a leafless palm branch and broke it into two pieces and put one on each grave. He was asked, ‘Messenger of Allah, why did you do this?’ He said, ‘Perhaps their torture will be lightened for them for as long as these do not dry up – or until they dry up.'”[Bukhari]
Whilst commentating on this tradition (hadith), Mulla `Ali al-Qari writes in his Mirqat al-Mafatih, “Thus, some of the imams of our later scholars have issued legal verdicts (fatwa) which state that it is a sunna to place palm branches and myrtle on the grave as people are accustomed to.” [Qari, Mirqat al-Mafatih, also quoted with discussion by Tahtawi in his marginal notes (hashiya) on Maraqi al-Falah]
Ibn `Abidin also comments on this saying, “What is taken from the tradition is the recommendation of placing them [= palm stalk] in following the Holy Prophet (Allah bless him and give him peace). Analogy can be made from this for what people customarily do in our times by placing myrtle boughs and the like. A number of the Shafi`is concurred.” [Ibn `Abidin, Radd al-Muhtar `ala al-Durr al-Mukhtar]
And Allah alone gives success.
wassalam,
Tabraze Azam
Checked & Approved by Shaykh Faraz Rabbani. 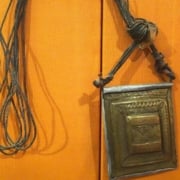 Is Hugging on Eid an Innovation (Bid`a)?

Is Acting on Weak Hadiths an Innovation?

What does the word "adornment" (zeena) in the Qur'an refer to?

Is Using a Ta'wiz (Amulet) Permissible?