Can someone who praying on a chair lead the prayer?

Generally, the congregation is basing and building their prayer upon the imam’s prayer, and the latter is only able to uphold the prayer of everybody else when his own prayer is legally considered to have a strong foundation. This condition is absent when he isn’t actually prostrating, and thus, he cannot lead others in a congregational prayer in such a state.

But if the imam is praying part of the prayer on a chair or seat of some kind due to illness or injury, such as the final sitting, this would be acceptable because what determines the strength of the prayer or otherwise is whether or not there is actual prostration on the ground. 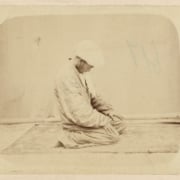 Praying Whilst Seated Without an Excuse.