Question: Alhamdulillah I was honoured by Allah to attend Hajj this year. After completing the Hajj and doing some research, I realised we made some mistakes during the Hajj. Firstly, after stoning, sacrificing and cutting our hair but before Tawaf az-Ziyarah my wife and I forgot we were not completely out of ihram and we hugged once and kissed on the lips before realising what we had done. Then the next day, on the 11th of Dhul-Hijjah we had gone to make Tawaf az-Ziyarah in the night and when we came back it was after sunrise, so we decided to pelt the jamarat as we were passing by Mina but it was before zawwal time. I later found out this is impermissible and does not count as pelting for that day.

From the above, I believe me and my family owe 5 animal sacrifices: 2 between me and my wife for intimate relations before Tawaf az-Ziyarah, and 3 between myself, my wife and my mother for each missing a day of pelting. Is this correct?

Yes, this is correct: you owe two, your wife owes two and your mother owes one. Each sacrifice is of one sheep. 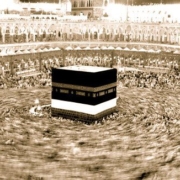 Is Foreplay a Violation On Hajj?